The creators and stars of upcoming Stephen Merchant-starring BBC1 factual drama Four Lives about serial killer Stephen Port’s crimes have slammed London’s Metropolitan Police and the UK justice system for “monumental failings” over the case. Merchant also teased his approach to playing the lead role of Port, describing him as “like the shark from Jaws in that the shark is unknowable.”

An inquest into the Met’s investigation into Port’s four murders concluded earlier this month that three of them “probably” could have been avoided if the police hadn’t missed opportunities, while a group of UK MPs has called for a public inquiry into claims of institutional homophobia that beset the case.

Veteran Four Lives exec Jeff Pope said the four dead young men had been “brutally opened up to the most horrific public exposure” during the case, which led to a full life sentence for Port in 2016, from which he will never be released.

Pope, who reunited with BBC1’s The Moorside writer Neil McKay for Four Lives, told a Royal Television Society Q&A their focus was always on the families rather than Port himself or the police.

“We felt there was a monumental failing on the part of the authorities, the police and the justice system and the way to tell this story was to come at it from the family’s point of view, faithfully recounting what happened to them at each step,” he added.

The drama was delayed by two years as the BBC waited for the inquiry into the investigation to end but Pope believes the police has “failed to get its house in order” during that time.

“It needs to be clubbed around the head to stop this happening again,” he added. “Having waited all this time, the only light is that we now transmit our show when the story is front and centre.”

Merchant described the police’s behaviour as “chilling.” Along with a “lack of communication,” he blamed “mediocre people hired in high positions of authority.”

“The families were knocking on the door begging to offer information,” he added. “This isn’t Stalin’s Russia where people disappear and you can’t get answers from the authorities, this is a country that prides itself on democracy. And it’s not just the police. There is something not working in these structures and it’s worrying that we don’t ask questions over how these things are run.”

“It reminded me of the shark in Jaws”

Merchant, who also created and starred in BBC1/Amazon comedy-drama The Outlaws, was “anxious” when approached to play the lead role over fears it would “sensationalize” Port. 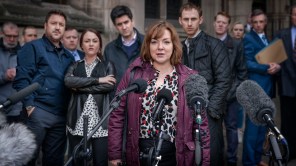 “But I realized that’s not what the script was,” he explained. “It reminded me of the shark in Jaws in that the shark is unknowable but the impact of his actions is what’s of interest. Port is unknowable so the most you can do is try and render the banality of evil. To me this wasn’t about making him a moustachioed villain or really creepy it was about saying ‘here’s a man devoid of personality’.”

ITV Studios’ three-parter, which kicks off next week, also features The Moorside star Sheridan Smith and Jaime Winstone as relatives of two of the murdered young men.