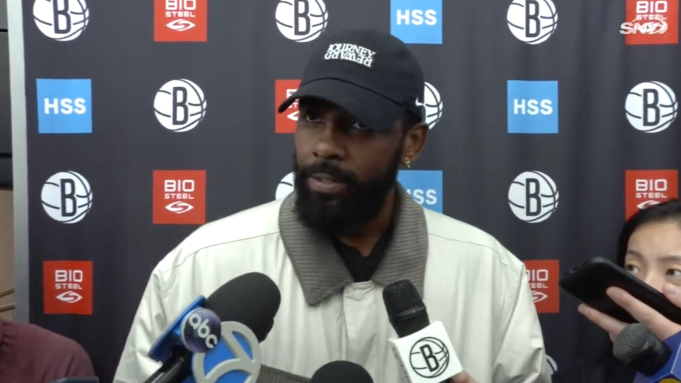 One day after he issued a carefully-worded statement that stopped short of the words “I’m sorry” in relation to a link he posted to an antisemitic film, Brooklyn Nets superstar Kyrie Irving was asked at practice today whether he holds any antisemitic views.

“Again, I’m going to repeat. I don’t know how the label becomes justified because you guys ask me the same questions over and over again,” Irving said. “But this is not going to turn into a spin-around cycle — questions upon questions.

Asked directly for a “yes” or “no” answer to the question about his views Irving repeated, “I cannot be antisemitic if I know where I come from,” evading a definitive “yes” or “no.”

The “I know where I come from” part seems to be a reference to what the Anti-Defamation League describes as “the Black Hebrew Israelite (BHI) belief that certain people of color, including Black Americans, are the true descendants of the biblical Israelites.” That idea sits at the core of the film that Irving tweeted a link about last week, which set off the current media firestorm.

Per an ADL explainer posted today, “The film promotes beliefs commonly found among antisemitic and extremist factions of the BHI movement, including claims that modern Jews are imposters who stole the religious heritage of Black people and have engaged in a ‘cover-up’ to prevent Black people from knowing their ‘true’ identity.”

The film #HebrewsToNegroes has been in the news recently, due in part to comments from @NBA star @KyrieIrving. Our experts explain why the film raises alarm bells, from its promotion of #HolocaustDenial to amplifying antisemitic conspiracy theories: https://t.co/YNnF1VHa5z

Irving’s refusal this morning to state simply that he does not hold antisemitic views drew a swift rebuke from ADL CEO Jonathan Greenblatt, whose organization issued a joint statement with the Nets superstar yesterday which seemed set to put this all behind him. But after Irving’s comments — or lack thereof — this morning Greenblatt tweeted, “The answer to the question ‘Do you have any antisemitic beliefs’ is always ‘NO’ without equivocation. We took @KyrieIrving at his word when he said he took responsibility, but today he did not make good on that promise. Kyrie clearly has a lot of work to do.”

The answer to the question “Do you have any antisemitic beliefs” is always “NO” without equivocation. We took @KyrieIrving at his word when he said he took responsibility, but today he did not make good on that promise. Kyrie clearly has a lot of work to do. https://t.co/0hQ6pEueOP

Likewise NBA Commissioner Adam Silver, who also expressed disappointment this morning and indicated that he will be meeting personally with Irving this week to discuss the matter.

The following was released by the NBA. pic.twitter.com/iD3GkJvekR

Silver is legally obligated to fine and/or suspend Irving, according to the NBA Constitution and its By-Laws, if the player has, his his opinion, inappropriately conducted himself. Last year, then-Miami Heat center Meyers Leonard was fined $50,000, suspended from the team’s facilities and banned from team activities for a week for an anti-Semitic slur he was heard using on a leaked clip.

While both the league and the Nets have condemned Irving’s actions, there have been no fines. That could, of course, change depending on the tenor of Irving’s meeting with the commissioner. The superstar point guard is not one to back down, however, from his convictions.

During the height of the pandemic, when it was required that all performers in New York be vaccinated, he sat out of home games, a decision which, by his estimation, cost him dearly.

“I gave up four years, 100-and-something million deciding to be unvaccinated and that was the decision,” Irving said at Nets media day six weeks ago. His current stance may also prove costly.

“The next time that Kyrie Irving speaks with the media, it will be the most important moment of his career,” former Nets player broadcaster Richard Jefferson — who won a championship with Irving on the 2016 Cavaliers — said on ESPN earlier this week. Today was that moment. The impact remains to be seen.