The upcoming 20th season of American Idol will be without Bobby Bones. Bones confirmed Friday on Instagram Stories that he’ll be ending his run on the ABC singing competition series after four seasons.

In a since-expired post, Bones revealed that because of conflict with another show, he won’t be on Idol this season. You can read it in full below.

“Some of you noticed I’m not in the Idol promos this season,” he wrote. “My contract [with] my new network won’t let me do another show right now. Love Idol, btw. Was a great 4 years.”

Bones has been with the ABC revival since Season 16, serving as a guest mentor for contestants. He became a full-time mentor the following season.

Bones is known as host of the nationally syndicated radio show, “The Bobby Bones Show.” Bones won season 27 of ABC’s Dancing with the Stars and also served as host and executive producer of Opry, a weekly TV program which aired on Circle Network. He most recently headlined Breaking Bobby Bones, a 16-part show produced by BBC Studios, in which he travels to far-flung destinations across the country to find people with unique jobs, skills, hobbies and abilities who will challenge him to conquer the tricks of their trades.

Seacrest and judges Katy Perry, Luke Bryan, and Lionel Richie will return to American Idol for its 20th season, which premieres February 27 on ABC.

Deadline has reached to ABC and American Idol for comment. 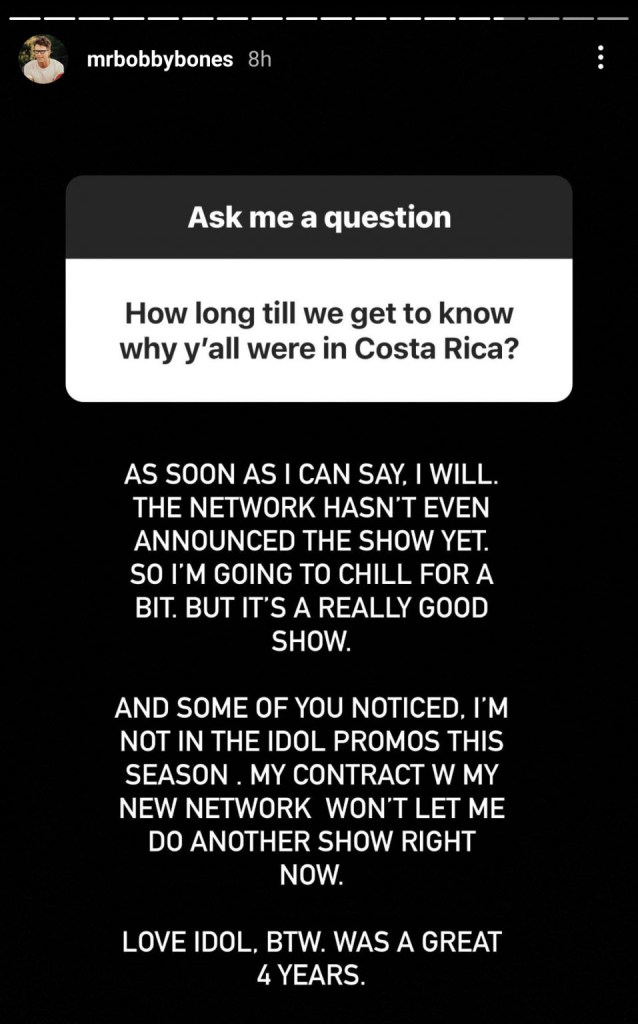