Chris Noth‘s surprise appearance in And Just Like That‘s finale airing on Feb. 3 has been scrapped, a source has confirmed to Deadline. The scrubbing is the latest fallout for Noth following accusations of sexual assault were made against the actor by multiple women. He has denied the allegations. 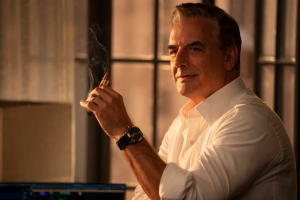 Chris Noth in ‘And Just Like That…’
HBO Max

Noth, who portrays Mr. Big in the franchise, died in the premiere episode of HBO Max’s Sex and the City spin-off but was due to return in a flashback scene set in Paris. Big’s wife Carrie Bradshaw (Sarah Jessica Parker), tucked his ashes away in the closet of her Brownstone until she could find where he wanted to be.

In paparazzi photos shot in Paris, Carrie is shown emptying out what looked like ashes out of her Eiffel Tower purse and into the Seine River.

According to TV Line who broke the news of the finale edit, the creative team behind the series decided the images shot in the City of Lights were not integral to the scene.

Noth recently made his final appearance in CBS’ The Equilizer after it was announced he was fired from the show in connection to the same allegations.