Willie Garson in HBO Max’s ‘And Just Like That..’
HBO Max

SPOILER ALERT: The following story reveals details from Episode 4 of HBO Max’s And Just Like That…

The fate of the Sex and the City franchise favorite Stanford Blatch begins to unravel in the fourth episode of HBO Max’s And Just Like That, following the death of Willie Garson in late September of pancreatic cancer. 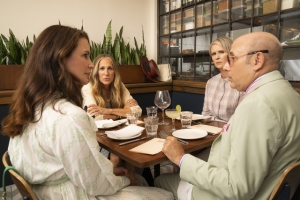 It’s not fair to say his exact fate has been revealed as of yet considering Carrie’s (Sarah Jessica Parker) bestie has departed the states for Tokyo for business reasons. This leaves endless possibilities for a proper plan to explain why Stanford will never be seen on the series again.

When we see Carrie in episode four titled, “Some of My Best Friends,” she has decided to sell off the home she shared with Mr. Big (Chris Noth) after his death in the premiere episode. She has now found solace at her famous Brownstone once again, bringing with her Big’s ashes which she stores on a high shelf above all her fabulous clothes and shoes in her closet.

“Just til I can figure out where you really want to be,” she says out loud while speaking to the box labeled, Stone Mortuary.

As she exits the closet, she discovers a yellow envelope tucked behind her vintage Black rotary phone with her name emblazoned on the front and two little ice cream cone stickers. It’s a note from Stanny. 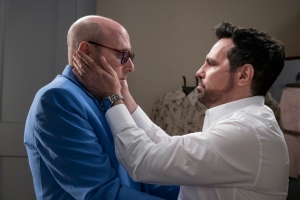 Written on his stationary, the note reads, “Dearest Carrie, By the time you read this I will be in Tokyo. I couldn’t call you—not without crying.” The remainder of the message was not clear to the viewer but Stanford’s husband Anthony Marentino (Mario Cantone) brings with him some clarification shortly thereafter.

“You know Stanny, he hates to disappoint people,” Anthony tells Carrie as she wonders why he wouldn’t tell her all this face to face. Hasn’t Carried dealt with enough goodbyes via notes? At least this one was on proper letterhead and not a random post-it note a la Berger (Ron Livingston).

Not only has Stanford left New York for Japan to support a 17-year-old social media star he represents who is going on tour in Asia, but he’s also ending their marriage. It’s worth noting that Stanford and Anthony were at odds in the first three episodes of the season, more so than usual.

He tells Carrie, “You know, I got a letter too. He wants a divorce. I don’t get it? We were so happy.”

Viewers would agree that even with all their back and forth drama, the pair did grow to love one another. Leaving his departure to Japan—similarly to Samantha’s (Kim Cattrall) move to London—not in line with who these characters are.

Although Stanford has exited the story physically, there has to be more to his departure that will play out in the remaining episodes? What if Stanford left knowing he was sick and didn’t want to be a burden? This is purely speculative but his dying either at the end of the season or if the show returns for Season 2, would make the most sense.

Stanford was definitely dealing with something in And Just Like That…, but viewers will have to continue watching to see how it all unfolds. But after the loss of Mr. Big and, to much less fanfare, Bobby Fine (Nathan Lane), hopefully (if Stanford will die on the series), they’ll wait for Season 2. Plus, wouldn’t that make for the perfect time for a reunion with Samantha? #DareToDream

New episodes of the series air Thursdays on HBO Max.