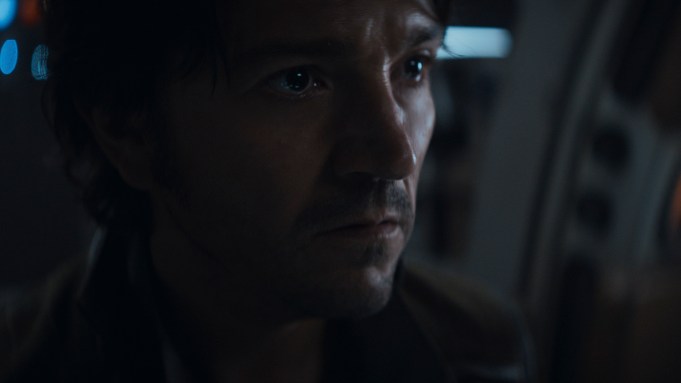 Star Wars creator George Lucas once wrote about “the taxation of trade routes” in the opening prologue of Star Wars – Episode I: The Phantom Menance, and if Disney+’s Star Wars series has given die-hard fans anything, it’s the binary, granular look at how such universe politics come to be.

While The Mandalorian, Obi-Wan Kenobi and The Book of Boba Fett have been intoxicated by callbacks to legacy characters and all-things atmospheric from Lucas and even Star Wars animation architect Dave Filoni’s imaginings, Gilroy has focused on the smaller conversations — the clerical details if you will, of how a bureaucratic Imperial force rises and how a rebellion among disparate factions comes together — (Hint, it helps to have a rich person in your corner who is attempting to move money around and fund the opposition, read: Genevieve O’Reilly’s rebel cofounder-to be, Mon Mothma).

One such jaw-dropping detail revealed in the epilogue: Those big steel wheels that Cassian and the Narkina 5 prisoners were assembling a few episodes ago were parts for the Death Star’s firing cannon. Duh. It’s those type of Easter eggs that Andor has thrived on, versus, say deep universe cameos from the Filoni animation shows.

Season 1 completes the first year in rebel-to be Cassian Andor’s life. He returns to Ferrix for his adoptive mother Maarva’s (Fiona Shaw) funeral, but he can’t exactly be out in the open. The Imperials are sniffing out something is about to go down, and it does, as droid B2Emo projects a hologram of Maarva before the crowd, and in Obi-Wan style, encourages them to fight the power (“Fight the Empire!”). At which point, there’s an outburst worse than a drunk Mardi Gras with pipe bombs going off. Let the Star Wars begin. Andor escapes through furnace tunnels, and Imperial Security Bureau supervisor Dedra Meero (the sublime Denise Gough) is trampled by protestors, only to be rescued by her twin flame, anti-Andor, uber-Imperial wannabe Syril Karn (Kyle Soller). It was just a few episodes ago, she was playing hard to get. Now it looks to be a romance steamier than anything on Grey’s Anatomy.

“You came to kill me,” Andor says. “You don’t make it easy,” answers Luthen.

Luthen grins, knowing that Andor is part of the Rebel cause.

Here’s our interview with Andor creator Tony Gilroy, who was taking a break from shooting season 2 over in England:

DEADLINE: Was there something in history that the Season 1 finale was inspired by? Especially with everything that is going on in Ukraine.

TONY GILROY: It’s just so incredibly sad how easily available all of the things that seemed contemporaneously sad are through history, and that they just continue to repeat themselves.

There are things all the way through the show, and I don’t want to go through and quote chapter and verse, but this is the Russian Revolution. This is the Montagnard. This is something interesting that happened in the Haitian Revolution. This is the ANC. Oh, this is the Earth Gun Building, Palestine. This is the Continental Congress. This goes all the way…I mean, you could drop a needle in the last, I don’t know what is recorded history, 3,000 years, legitimate recorded, I mean, slavery, oppression, colonialism, bad behavior, betrayal, heroism, I mean, it’s a continuum.

DEADLINE: The fleshing out of Rebel cofounder Mon Mothma – she feels like a nod to Nancy Pelosi. She’s this upper class person who knows she’s a catalyst to make a difference and right wrongs.

DEADLINE: The cliffhanger where Cassian lays his life on the line and faces off with Luthen Rael — were you always planning that?

And so, yeah, the final moment of this is a blood out. It took us this long to do it. It is what it is, the road to Damascus, or it’s 12 stations of the cross, or whatever context you want to put it in. He’s gone through everything to become: To sort of give a blood out at the end of the show and say, ‘That’s it, I’m in.’ His commitment to the Rebellion and to fight the Empire and to dedicate his life to that, we’re not going to put that in doubt now. Going forward, we have a whole bunch of new issues that we’re going to deal with. But that final line was on the table before many other things were worked up.

DEADLINE: Mapping out next season, how many episodes per each year of Cassian’s life?

So, when we come back for our second half, it’ll be a year later. An entire year will have gone on. All kinds of things will have happened, and we’ll pick up the show; sometimes we’ll do a week, we’ll do three days, we’ll do four days, whatever, and then we’ll drop a year in between.

The last one will be the last, I don’t know what it is, three, four days before the beginning of Rogue One, and then our final scene has always been known, which will be walking him into the first scene of Rogue One. So, we will be dealing with time in a different way, but it’ll be blocks of three. That’ll be our principle.

DEADLINE: Can you tease Season 2?

Duncan Pow, who plays Melshi, will be back. Obviously, we’re playing there with that, because he’s going to be in Rogue One.

DEADLINE: The Imperials seem to be making Cassian a more notorious guy than he really is. They seem to be giving him this larger than life reputation. Do you agree?

GILROY: One doesn’t even really know who he really is. They don’t even really know how bad he is. They don’t know. I mean, they think he might have been in Aldhani, but the reason that Denise Gough’s Dedra Meero is trying to get him so bad — it’s a great hunter and hunted relationship. It’s a desperate thing and she’s right to be chasing him. She’s thinks enough like him that she’s the first person who realizes that Aldhani isn’t a robbery, it’s an announcement. And she’s going to be chasing him for a long time, and you know, Cassian is the link. That is the only viable link that she can find. If she can find him, she might find Luthen. Stellan’s Luthen doesn’t know who Cassian is.

DEADLINE: That epilogue with the building of the Death Star, was that always in the cards?

GILROY: Yeah, when we came up with the prison and then we started saying, ‘What are we making?’ and then we built the thing. It’s like, ‘Oh, my God. Well, let’s have it do that. How ironic and how potent and how round and synchronicitis that is.’

And then, Mohen Leo and TJ Falls, who are visual arts department, who are just amazing and they were on Rogue One, they were like, ‘Oh, let us play with that.’ And you know, six months later you go into a visual master deal and it’s like, oh, we have a special gift to launch today and it’s like, the raw version of that, it was so cool. They did all that and we helped refine it, but it’s their piece as well.

The Q&A was edited for length and clarity.