Andrew Garfield had a year to learn how to sing before starring in Lin Manuel-Miranda’s Tick, Tick…BOOM to take on the role of Jonathan Larson. Now with the film just days away from debuting on Netflix, the Oscar nominee says he’s walking away with a much deeper relationship with the Rent creator.

“When I started to understand who Jonathan Larson was, it was as if Lin was re-introducing me to a long-lost brother I didn’t know I had, like  an older brother I felt a kinship with,” Garfield said Sunday during Deadline’s Contenders Film: Los Angeles at the DGA Theater. “Someone who’s a revolutionary, someone who saw the heartbreak of the world around him and turned it into beauty.”

Garfield, joined on the panel by his fellow co-stars Alexandra Shipp and Robin de Jesus, spoke about Larson’s lasting legacy and working with Miranda. 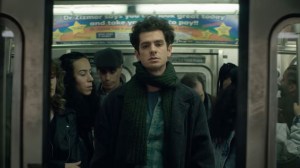 In the Netflix film, Garfield plays Jon, a young theater composer who’s waiting tables at a New York City diner in 1990 while writing what he hopes will be the next great American musical. Days before he’s due to showcase his work in a make-or-break performance, Jon is feeling the pressure from everywhere: from his girlfriend Susan (Shipp), who dreams of an artistic life beyond New York City; from his friend Michael (de Jesús), who has moved on from his dream to a life of financial security. Amidst an artistic community being ravaged by the AIDS epidemic, Jon feels the clock ticking and faces the question everyone must reckon with: What are we meant to do with the time we have?

For the Tick, Tick…BOOM! cast, Larson and his intentions of creating Rent served as a “north star,” as did the intention to celebrate the lyricist. The trio also praised Miranda, who brought his expertise and undeniable talent to the project.

“We come with ingredients and he makes the meal,” Shipp said.

Garfield added: “He was the Catcher in the Rye, he set the playpen. He hires people who he trusts and who he wants to see fly and you start to fly to his level…We felt freer, more ourselves on set and therefore we were able to bring more of our own personal revelation, and our hearts to this project.”