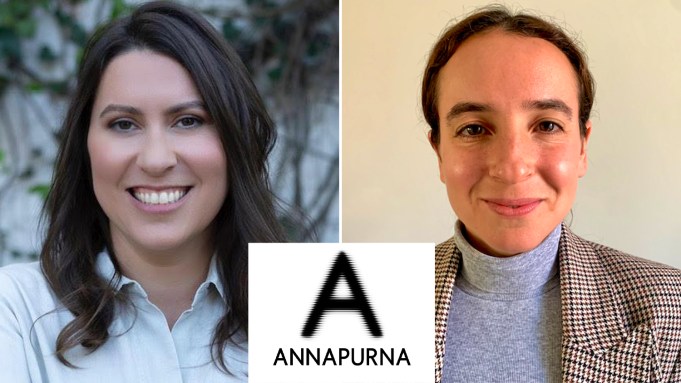 She replaces David Wolkis who is leaving the studio as their Head of Physical Production for TV and film.

Meanwhile, Skye Optican has also been promoted to Creative Director of International Development and Production.

Goldner will oversee all aspects of production management for Annapurna’s vast slate of film and television programming. Director of production Skye Caruso will continue to work for the production department, directly reporting to Goldner. Prior to joining Annapurna, Goldner worked at Picturestart, where she oversaw production on projects, including the 2022 Sundance Audience Award Winner Cha Cha Real Smooth and the Netflix Original, Luckiest Girl Alive, starring Mila Kunis.

Goldner has served in executive roles for companies such as Participant – where she worked on Academy Award Best Picture winners, Green Book and Spotlight, Oscar winner Roma and Oscar winner A Fantastic Woman, the box-office smash hits Wonder – as well as Focus Features and Summit Entertainment. Some of the movies she has worked on include the Twilight franchise, The Perks of Being a Wallflower, Deepwater Horizon, Now You See Me, On the Basis of Sex and 50 Shades of Grey.

Optican, who is based in London, will continue to serve in her current role as Co-Head of Theatre and will now also act as Creative Director of International Development and Production to expand Annapurna’s relationships within the UK and Europe. Optican will work closely with Annapurna’s Film, TV, Interactive and Animation divisions, leveraging established relationships with UK and European writers, directors and talent to continue the company’s mission of championing multidisciplinary creatives globally and creating synergistic opportunities for cross-medium collaboration.

Optican and Kevin Emrick, Co-Head of Theatre, launched Annapurna’s Theatrical Division in 2018 with the goal of producing high-quality original plays and musicals for Broadway and the West End. Annapurna revived Phoebe Waller-Bridge’s smash hit Fleabag to sold out runs on New York and London stages, in addition to recently co-producing the multiple Tony-award winning productions: A Strange Loop, The Lehman Trilogy, and Marianne Elliott’s Company. Before establishing a live stage division for the company, Optican worked closely under CEO and Founder, Megan Ellison, as Chief of Staff to help oversee the company’s growth from a film production company to the multi-media organization it is today.

Wolkis arrived to Annapurna back in May having over 20 years at WarnerMedia, his most previous position being SVP, Head of Production where he oversaw production of all scripted and unscripted originals across the three distinctive cable brands –TNT, TBS and truTV including late-night, game shows and series of all genres. He also collaborated with ad sales on product integrations.

In Television, Annapurna has garnered 12 Emmy nominations between The Staircase and Pam & Tommy earlier this year. Additional Annapurna titles include Vanessa Bayer’s comedy series I Love That For You which premiered on Showtime in May of this year. Sausage Party: Foodtopia is in production for Amazon Prime Video with Sony and Seth Rogen and Evan Goldberg at Point Grey. Up next to be released are The Changeling for Apple TV+ and Dead Ringers for Amazon Prime Video, both currently in post-production.

Annapurna recently announced their Animation division which is being helmed by former Disney Animation Executives Robert Baird and Andrew Millstein. Annapurna’s debut project with Bair and Millstein will be Nimona, directed by Nick Bruno and Troy Quane, and produced by Julie Zackary and Karen Ryan, for Netflix.