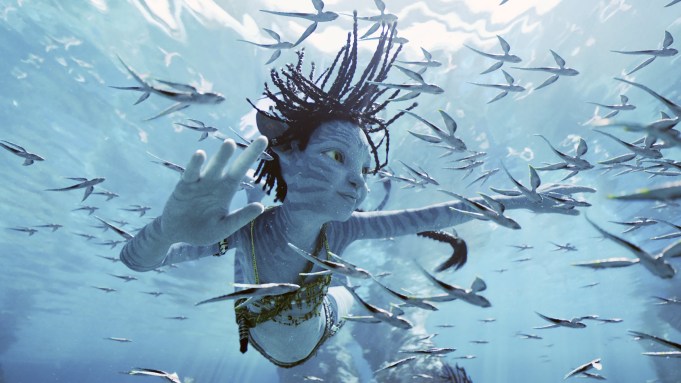 Refresh for latest…: It’s now official, James Cameron’s Avatar: The Way of Water has become the sixth movie ever to cross the $2B mark worldwide. It is also the filmmaker’s third to hit the milestone, alongside Titanic and the original Avatar.

The mega-achievement was presaged ahead of the weekend with the global gross on the 20th Century Studios/Disney sequel now $2.024B through Sunday. That includes $1.426B from overseas turnstiles. This means that offshore, Way of Water has become the No. 4 title of all time, jumping past Avengers: Infinity War and behind only Avatar, Avengers: Endgame and Titanic. This gives Cameron bragging rights to three of the top four movies ever at the international box office.

On a worldwide basis, Way of Water remains the No. 6 film ever, with the Na’vi next set on leap-frogging Infinity War and Star Wars: The Force Awakens. When that happens later this week, the epic sci-fi adventure will become the No. 4 movie of all time globally – and give Cameron three of the top four.

Also globally, Avatar: The Way of Water has grossed $227M from IMAX, overtaking Star Wars: The Force Awakens to become the 2nd highest grossing movie in the format’s history.

This sixth weekend overall saw a 38% drop overseas, bringing in a further $56.3M. Owing to the opening of several titles for Lunar New Year (see below), Avatar 2 had a 56% drop in China, however it has reached $229.7M there and stands as the highest grossing studio film of the pandemic era in the market, also having passed the original release of the first Avatar.

The film is now the top-grosser ever in Austria, Lithuania, Bulgaria, Hungary, Lebanon, Romania, Slovakia, Kazakhstan, Kyrgyzstan, Uzbekistan, Mongolia and Colombia. In terms of studio films, it is the biggest ever in India, Serbia, Turkey and Armenia.

While Avatar 2 has been enjoying a strong (and now extended) run in China, the focus there this weekend was the start of the Lunar New Year festival period. Frant Gwo’s sci-fi sequel The Wandering Earth II starring Wu Jing and Andy Lau was the top earner with RMB 472.4M ($69.7M) through Sunday, per Maoyan. It was followed by Zhang Yimou’s suspense comedy Full Red River at RMB 402.4M ($59.4M) and the Tony Leung Chiu-Wai-starring historical drama Hidden Blade at RMB 136.5M ($20.1M). Each of the films received high social scores at 9.4, 9.6 and 9.1, respectively according to Maoyan.

Anecdotally, we hear that this New Year period is the most anticipated by the local industry of the past decade. And, contrary to previous years, there were no midnight shows for the new titles, while all screenings were effective from 9 AM local time today. Presales were estimated to have come in lower than last year since the local movies started marketing campaigns later than usual, while we also hear that audiences and theater managers griped about the length of the titles during a holiday that is focused on family reunions — which is interesting given the top three films actually run far shorter than Avatar 2.

IMAX is deep in on the three CNY movies listed above as well as animated fantasy Deep Sea. The four titles grossed $7.2M across IMAX’s China network for the 2nd biggest opening day of New Year ever. The Wandering Earth II led play at $5.7M, double its predecessor in 2019.

In other encouraging studio news, Universal/DreamWorks Animation’s Puss In Boots: The Last Wish is closing in on $300M global. It saw a tiny drop of 19% internationally this frame to add $17.8M in 78 markets for an offshore cume of $171M and a worldwide total of $297.5M. The international performance (ex-China, where the movie has also been extended), is 39% above Sing 2 at the same point.

Puss is notably scoring in Latin America. In Mexico it overtook Avatar 2 this session for the No. 1 spot and has reached $16.6M to surpass the lifetimes of both Sing movies. In Brazil, the swashbuckler had more admissions than Way of Water and has cumed $9.6M. In Germany, Puss 2 has topped the lifetime of Sing 2 with $12.5M to date. The lead market is France at $18.3M, followed by Mexico, Germany, Australia ($10.9M) and Brazil. The UK and Japan are yet to open.

Damien Chazelle’s Babylon was new overseas this weekend in 53 markets with $13.2M. The expansive/expensive proposition was almost naturally tops in France, which is a fan of the filmmaker, landing No. 2 with $3.4M. The UK was soft at $1.8M, followed by Australia with $1M. Korea and Japan bow in February.

Universal/Blumhouse’s M3GAN danced to a drop of 43% in 66 offshore markets this weekend, adding $10.9M for a $51.3M international cume to date and $124.6M global. The AI doll is in line with Smile, and above Invisible Man, The Black Phone and Halloween Ends at the same point in the same markets.

Brazil, which leans into scary stuff, was a highlight with the Thursday bow notching the 2nd biggest opening day for a pandemic horror film, only beaten by The Conjuring 3, and the biggest non-sequel horror opening day since Happy Death Day in 2017. As of Saturday it ranked ahead of Avatar 2 in admissions, delivering the strongest performance in popular and mixed theaters. The full frame was good for $1.4M to make it the best non-sequel horror launch weekend since It in 2017. The performance across the film’s first three days was almost double Black Phone at the same point – an outstanding result considering that Black Phone opened over holidays and is currently the biggest Blumhouse film in Brazil.