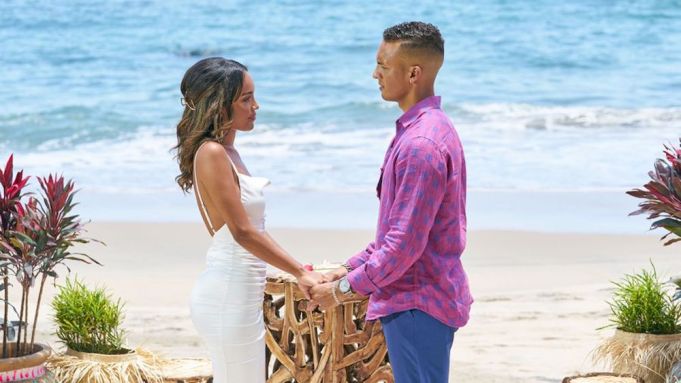 After a fairytale-worthy whirlwind of a romance, Brandon Jones and Serene Russell got engaged on Tuesday night’s Bachelor in Paradise finale on ABC. They were one of two couples to leave the beach engaged but the only one to make it to the reunion, which was filmed earlier this month.

And despite host Jesse Palmer’s tempting offer to marry them right there on the beach, they revealed during the finale that they have not yet tied the knot. Instead, they’ve spent the past few months as a happily engaged couple, though they’ve had to keep that a secret from the public.

“It’s so tough. We just crave normalcy,” Russell told Deadline of spending the time since production in hiding. “We’ve gotten to do a lot of fun stuff together, like move in together and decorate a home together and learn how to live together, but we just want to go on a date.”

Season 8 of Bachelor in Paradise was filled with drama among the other couples, which was only heightened during Split Week — when the men and women who’d begun to form connections were separated and new prospective romantic interests were brought in to test the strength of each couple. Few relationships made it through that split, but Jones and Russell remained steadfast.

Speaking with Deadline ahead of the finale, the couple explained that they’d been having conversations about the future throughout the entire production. So, while many of their more serious conversations didn’t make it onto the show until the other couples (and their never-ending chaos) began to dwindle, those moments ultimately led them to feel ready to take the next step together.

“When the drama was happening, we were having talks about the future, like ‘What are your plans? Do you plan on having kids or what do you see for your life?’” Jones said, with Russell adding: “What are your values? What’s something that’s really important to you? What are your career goals?”

One such moment was the first night on the beach, when a storm interrupted production. After already having a nearly 45 minute conversation that was caught on camera (“It was so long that the producers left us there,” Russell joked), they spent some more time stuck in a treehouse together waiting out the rain — a scenario they said was “unfortunate but worth it.”

Audiences had watched Russell and Jones each endure their fair share of heartbreak leading to Paradise. Russell departed Season 26 of The Bachelor after vying for Clayton Echard’s heart for eight weeks. Jones joined Bachelor Nation during Season 18 of The Bachelorette. He made it to the end, becoming one of two men to get down on one knee to propose to Michelle Young. He was ultimately turned down for the final rose.

Returning for another shot at love wasn’t easy for either of them, but they both expressed they felt driven back to the franchise out of a fear they’d regret what could have been.

“There’s just opportunity that you would never get in the real world to focus in and really try a relationship,” Russell said. “I didn’t want to harden my heart after the last thing that happened. Even before that, I’ve always worked really hard to stay open. I was excited for Paradise, because dating in the real world, you might see someone a few days a week or a couple of hours here and there. But in Paradise, you really have a chance to make something grow. So I’m like, ‘Why not give that a shot?’”

Jones added: “For me, it was a little more difficult, but I didn’t want to live with ‘What if?’ If I never went this [engagement] would’ve never happened. Looking at my person, I’m like, ‘Yeah. I would have regretted it if I didn’t go.’”

“That’s a way better way of saying what I said,” Russell laughed in response. “I’m always that person that lays everything out on the line. I’m not the type to just not go and see what it’s about.”

lyrics https://lyrics.az/?Willie Nelson – It Gets Easier=