Aaron Sorkin and the cast of Being the Ricardos hit the stage for Deadline’s Contenders Film: Los Angeles on Sunday. The Amazon romantic drama, which celebrates the legacy of Lucille Ball and Desi Arnaz, is set to premiere December 10 in theaters, then debut on Amazon Prime Video 11 days later.

“I was certainly intrigued that Lucille Ball has been accused of being a communist, which I didn’t know,” Sorkin said during the film’s panel at the DGA Theater, where he was joined by stars Javier Bardem, Nicole Kidman, Nina Arianda and J.K. Simmons. “I asked around to see if I was the only one who didn’t know this. And it turns out, I wasn’t.”

He continued, “[The story] weaves in and out so beautifully telling [Lucy and Desi’s] story. It just weaves in and out — this is really a love story. It’s a romantic drama. Lucy and Desi were passionately in love with each other, and it’s just heartbreaking that the two of them couldn’t get it together to have this relationship for very interesting reasons.”

The film is set during one production week of the iconic TV comedy I Love Lucy — the Monday table read through Friday audience filming — when Lucy and Desi face a crisis that could end their careers and another that could end their marriage. Simmons and Arianda play Lucy and Desi’s I Love Lucy co-stars William Frawley and Vivian Vance, respectively. 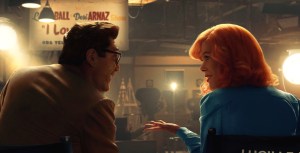 ‘Being the Ricardos’
Amazon Studios

Kidman opened up about how much it’s meant to her to have the support of Ball and Arnaz’s daughter Lucie Arnaz, who celebrates Kidman’s and Bardem’s performances.

“It’s been a huge, huge relief because it’s her parents and we wanted to honor them but we wanted to show them with their flaws,” she said. “Javier had his own conversations with her. She was very supportive of us. She wanted us to play the roles.”

Bardem revealed he went after the role of Arnaz, a personality he wasn’t very familiar with as a Spaniard. But the Oscar-winning actor does have a cultural connection to Arnaz who, as a Cuban, has strong ties to Spain.

“Yes, I went after the role of Desi because in Spain, [the show] wasn’t as popular there,” Bardem said. “I knew at the moment prior to watching the show and reading about it, that I had a strong connection for what he represented in some weird way. I was very much looking forward to playing him.”