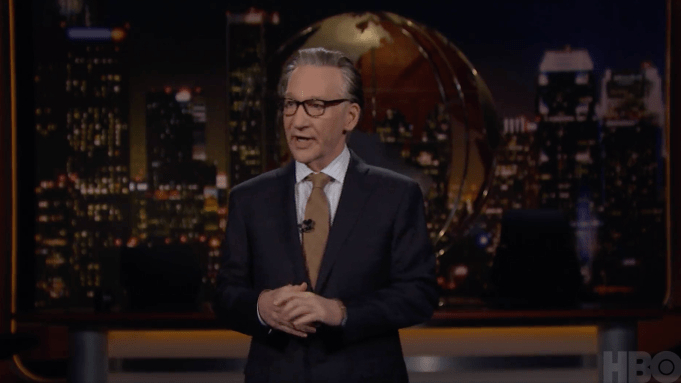 On the debut episode of Real Time’s 21st Season on Friday, Bill Maher had a lot of lost time to make up for and a lot of low-hanging fruit to grab after weeks of being away.

“We’ve got a new Republican House,” Maher began. “It took them 15 ballots. I think the last time it happened was 1823 or something.”

Then he put an exclamation point on it: “Fifteen ballots to elect Kevin McCarthy.”

By contrast, he noted, “Oscar nominations come out Tuesday. I know Washington likes to look down their nose at Hollywood and I would agree: Awards shows are pointless virtue signaling. But we don’t need 15 ballots to get it done, ok?

“Apparently it looks like they’re saying the big odds-on favorite to win [Best Picture] is this movie — I don’t know if you’ve seen it — Everything Everywhere All At Once,” Maher said before waiting a beat to deliver the punch line. “It is the story of how George Santos lies.”

Then he was off and running.

“I can’t keep up with this f*cking guy,” the Real Time host said of Santos. “He started a GoFundMe for a homeless veteran’s dog and then kept [the money]. Trump said, ‘He’s like the son I never had.’ “

Maher said that, despite all Santos’ lies, “They’re not getting rid of him. They need the vote.”

And it’s not just Santos, he said.

“This new Congress — Majorie Taylor Greene, Jim Jordan, Lauren Boebert — what can I say? The zombies are in the mall.

“Majorie Taylor Greene has got a seat on the Homeland Security Committee. Two years ago, she couldn’t get a seat at the adult table at Thanksgiving.”

The Real Time host compared the situation to a reality TV show.

“I couldn’t make this up,” he said of Greene. “She and Lauren Boebert — you know, the other one, the crazy gun nut from Colorado — they had a fight in the ladies room. Yes, The Real Housewives of Congress.

“With all due respect to my friend Jeff Foxworthy, when you’re fighting in the ladies room, you might be a red neck.”