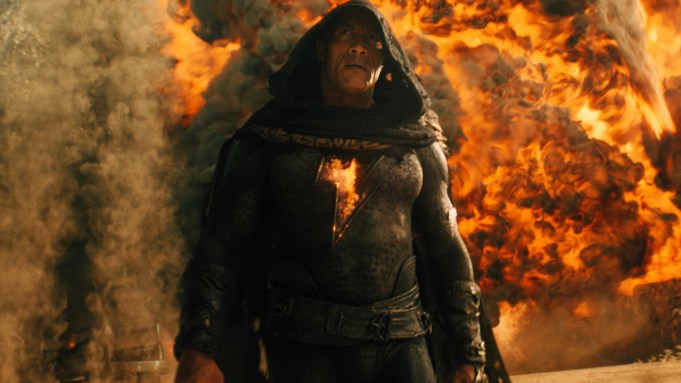 Sunday AM Writethru: after Saturday update, with chart: Before Disney/Marvel’s Wakanda Forever comes in and does $175M-$200M next weekend, providing a complete rebirth to the domestic box office, don’t knock New Line’s Black Adam this weekend, which had a fantastic hold of -33% for a third weekend of $18.5M. Total running domestic cume stands at $137.4M.

Some rivals have snarked to me about the big cost for this movie at $200M before P&A, that Black Adam won’t profit like Johnson’s Fast & Furious spinoff Hobbs & Shaw, which had the benefit of $200M out of China (again, Uni only got a 25% rental there)and a better exchange rate, that film doing $759M WW and yielding an $84M net profit after all ancillaries. Black Adam will be lucky to top out at $400M WW. Again, Warners couldn’t have seen that strong dollar coming abroad. Two quick thoughts: in some ways, we’re still in a marketplace of rebuild, and you could argue this was a pricey pic to start a deep universe DC franchise. Then again, it’s a Rock movie, with the same production price tag as Hobbs & Shaw.

However, stateside, we can’t throw shade on Black Adam. This movie is the biggest thing in the market right now, spurring concession sales for exhibition over the last three weekends. It came out of the gate as Johnson’s top solo opening with $67M. Black Adam‘s third weekend boasts a better hold and box office in its third weekend than Hobbs & Shaw (-44%, $14.1M). The pic’s running total is pacing 3% ahead of Hobbs & Shaw at the same point in time. Black Adam even had a better third weekend than San Andreas ($10.8M, -58%) and is also ahead of that film’s running U.S/Canada total $119.1M.

Crunchyroll’s One Piece Film Red is missing the $10M outlook it had yesterday AM with a $9.47M opening. The Toei Animation coproduction looks to top out at $20M at the end of its short theatrical run, which is typically where these anime movies from Crunchyroll begin. The film is available subtitled or dubbed in English. Fans showed up. and fans alone, giving the movie an A CinemaScore. Audience exits on Comscore/Screen Engine PostTrak saw 88% positive-leaning, 76% guys, 75% between 18-34. Diversity demos were 23% Caucasian, a great 37% Latino and Hispanic, 18% Black and 22% Asian/other. Those who bought tickets wanted to see it in Imax or on PLF, with those formats driving close to 40% of weekend ticket sales.

RelishMix noticed positive word of mouth for this movie on social. However, it’s clear it’s not as popular as Crunchroll/Funimation’s previous fare, i.e., the Dragonball franchise. “Crunchyroll fans navigate the robust anime social media ecosystem that connects 22.5M fans across Instagram, Facebook, Twitter, TikTok — and YouTube, which is where the majority of engagement takes place, with 714.2M views on five studio-owned videos at an reposting viral rate of 65:1. Animated film clips, promos, some with subtitles, are woven in with music videos featuring artist Ado, who also is cross-promoting the film on her YouTube channel with 4.3M subs,” reports the social media analytics company.

And now a word about the specialty sector. Again, as box office looks to regain its pre-pandemic footing, granted, we’ve been soft and forgiving in our assessment, especially last weekend, when the wide expansions of Till, Tar ($1M, $964 theater average), Triangle of Sadness ($883K) and Call Jane (a 1,000-plus opener with a $248 theater average; the pic fell 75% in weekend 2 with $60K) weren’t that super. It’s clear there continues to be a hobbled older adult audience out there.

But in some ways, it isn’t. Similar to big studio wide releases, the success of these movies goes back to product.

Searchlight’s Banshees of Inisherin in its 895 expansion with a $2M take and $2,2K theater average didn’t wow, but in complete fairness the film was alright in its expansion next to largely everyone else. Pic’s best markets were NYC, Chicago, DC, Boston, Philly, Austin, Minnesota, Denver and Vancouver. But even in those places, the ticket sales dropped off when you look outside the core areas. The pic skewed heavily Caucasian at 83%. PostTrak exits were 81% positive, with 57% guys, and 51% over 35.

Adding further agita for these movies is that Wakanda Forever is going to vacuum up all the theaters that aren’t doing business for this fare. I understand Banshees has a two-week wide commitment.

What’s going on?! Again, it’s product, product, and a bulk of these indie films are dour or tiresome for audiences: an egotistical composer, a drama centering around two older actors, and a director’s autobiopic, to name a few. Nothing screams stampede. But look what is doing great with adults: an upbeat frothy George Clooney & Julia Roberts romantic comedy, Ticket to Paradise, which has an amazing -14% third weekend hold for $8.5M and a running cume of $46.7M, and TriStar’s anomaly African warrior epic The Woman King ($65.9M running total through weekend 8). So we can’t say that adults aren’t entirely going to the box office. It’s the movies, stupid.

Look, at the end of the day, unlike pre-pandemic times, sour grosses aren’t going to impact these pic’s Oscar chances. Searchlight got a Best Picture win out of Nomadland which didn’t have any public reported numbers, and they got a Best Actress win for Jessica Chastain for The Eyes of Tammy Faye and that movie only made $2.4M stateside last year.

Also, as A24’s Everything Everywhere All at Once proved with a $70M stateside bank, if you want to create a renaissance for specialty cinema, make more edgy films for the the 18-34 crowd, as well as those that will pull in a diverse crowd. That’s who’ll save arthouses, at least in the near future.

Overall tickets sales for all movies are estimated to be around $62M, still God awful low.

RELATED: Jaume Collet-Serra Q&A: ‘Black Adam’ Helmer Talks His Pitch To Dwayne Johnson, His New Thriller With Taron Egerton & How Having Kids Has Influenced His Directing

Friday Afternoon: It’s not anime that will have the upper hand at the weekend box office, but the People’s Champion.

Dwayne Johnson’s New Line DC movie Black Adam is looking to bring in a third Friday of $3.7M-$4.3M for what looks to be a $14M-$16M third weekend at 3,985 theaters, -45% for a running total by Sunday of $135M on the high end. If the higher end of the projection holds, Black Adam will be pacing about 1% ahead of Johnson’s Fast & Furious spinoff Hobbs & Shaw through its third weekend.

While Crunchyroll’s anime title One Piece Film Red looks to win Friday, including $1.7M previews, with $4.6M, industry estimates are forecasting that the movie will only yield a $8.8M-$10M opening at 2,415, which is on the lower end for the Sony-owned distribution label; its fare typically opens to $18M-$21M+.

Friday AM: As theatrical tries to find its footing from the pandemic, thank God for Crunchyroll anime films to fill the wide-release gaps on the calendar and spur popcorn sales for movie theaters. The Sony-owned label’s One Piece Film Red, based on the best-selling manga title and in partnership Toei Animation, made an estimated $1.6M-$1.8M Thursday off showtimes that began at 5 p.m. The movie also was booked at Imax and PLF theaters. Industry projections see the movie potentially upsetting the third weekend of New Line/DC’s Black Adam with a $14M-$16M opening at 2,415 theaters.

Those previews are slightly lower than recent Crunchyroll films, i.e. Dragon Ball Super: Super Hero did $4M before posting a 3-day of $21.1M in August, while Jujutsu Kaisen 0 posted a $2.88M preview back in March for a $18M weekend that finished No. 2 behind Warner Bros.’ third session of The Batman ($36.7M)

The latest installment of this global franchise is already the highest-grossing yet, having taken in more than $132M at the box office, with Japan accounting for $120M of that figure.

The series centers on the epic quest to find One Piece, the legendary treasure of the former King of the Pirates, Gol D. Roger. In the latest movie, the beloved singer Uta, whose voice has been described as otherworldly, is renowned for concealing her identity when performing. Now, for the first time ever, she will reveal herself to the world at a live concert.

One Piece creator Eiichiro Oda serves as the executive producer of One Piece Film Red, which is directed by Goro Taniguchi (One Piece Defeat Him! The Pirate Ganzack!), and written by Tsutomu Kuroiwa (One Piece Film: Gold).

Meanwhile, here are the top 5 films from Thursday night: