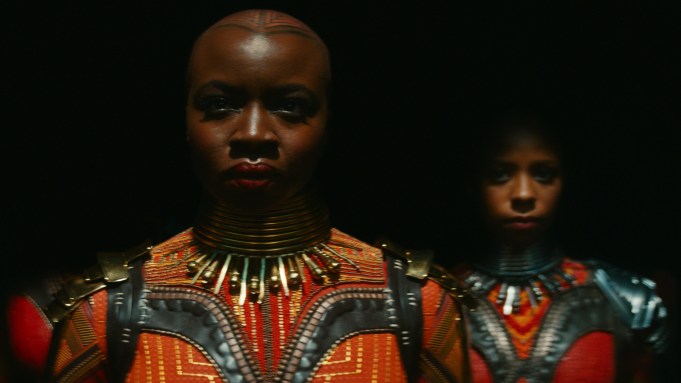 Despite the presence of New Line’s Black Adam and Universal’s franchise title Halloween Ends at the October box office, the drought we’ve been weathering since the second frame of August with U.S./Canada weekend ticket sales averaging $58M has been stinging to say the least.

But here comes Disney Marvel Studios’ Black Panther: Wakanda Forever to put the world back on its feet.

Expect the Ryan Coogler directed and written sequel to the 3x Oscar winning, $1.3 billion worldwide grossing hit to do between $175M-$185M stateside at 4,300 theaters and another $180M+ abroad for a worldwide start between $355M to $365M, which will make it the third highest debut of the pandemic after Spider-Man: No Way Home ($568M) and Doctor Strange In the Multiverse of Madness ($429M). That’s more than plenty to underscore the notion that moviegoing isn’t dead, it’s just about product.

That said, expect Wakanda Forever to rule for a while. It wouldn’t be surprising if it even beats Disney’s own Thanksgiving animation title Strange World over the Thanksgiving day stretch. It’s that spiritual of a movie, and much like we saw with F7 and how that title honored its late star Paul Walker, expect a cathartic experience to take effect here with Wakanda Forever in its deep homage to late Black Panther star Chadwick Boseman.

There’s a very good chance Wakanda Forever could reign well into December until Disney shows up with 20th Century Studios’ highly anticipated sequel, Avatar: The Way of Water, on Dec. 16.

Yes, there’s a lack of big tentpole product in Q4 due to many being stuck in the pandemic’s post production purgatory, however, many major studios are making conscious decisions of not booking any pricey counterprogramming in the off summer season. Going off what they learned last Christmas, the presence of a big tentpole like Sony/Marvel’s Spider-Man: No Way Home was not a situation where the tide rose all boats; in fact the only other movie to gross more than $100M in the face of Spidey‘s $814.1M, was Universal/Illumination’s Sing 2 with $162.7M stateside. Warner Bros. moved DC’s Shazam: Fury of the Gods out of Christmas so they could get access to Imax screens on March 17 next year.

With the first Wakanda Forever trailer taking off like a rocket ship out of the sequel’s star-studded San Diego Comic-Con panel back in July, the selling point for Wakanda Forever has been which of the women in T’Challa’s court takes over the mask. However, the movie is so much more than that and critics are realizing this at 91% fresh currently on Rotten Tomatoes. An added bonus for turnstiles is that a majority of schools are off on Friday, Veterans Day. Of course, Disney has command of all the premium ticket upcharges including 400 Imax, 900 premium large format screens; 2,800 3D screens, as well as ScreenX and D-Box. The first Black Panther opened to $202M in U.S./Canada over the Feb. 16-18, 2018 weekend and thanks to Presidents Day went to a $242.1M four-day.

Among demographics, while Disney can rely on men and fanboys in seats, there’s been a push to spike interest among women in part 2. In unaided awareness, meaning that demo who has already made up their mind that they’re going to Wakanda Forever without any marketing influence, the sequel is in line with Black Panther and Spider-Man: No Way Home among teen boys and males under 25. The Latino and Hispanic audience is very strong, pacing ahead of Doctor Strange 2, thanks to the new villain Namor played by Narcos: Mexico star Tenoch Huerta Mejía.

Wakanda Forever begins its overseas rollout tomorrow, Wednesday, in such majors as France, Germany, Korea and Italy; and adds all international markets through Friday except Russia and China.

The overseas debut at $180M+ is above recent comps in like-for-like markets and at today’s exchange rates including Thor: Love & Thunder ($163M), Jurassic World Dominion ($152M) and The Batman ($114M). It’s also higher than the original Black Panther ($144M).  Another key comp is Doctor Strange 2 which bowed to $242M in like-for-likes.

Wakanda Forever could certainly go higher than $180M, but there are a couple of factors here including the very strong dollar which is a drag on international box office, while Korea, which was the No. 3 overseas market on the first movie, is coming out of a mourning period following a national tragedy. Given that Wakanda Forever deals with grief and loss, the movie could either work or be a bit too soon. Hopefully, for audiences, it will be the former.

The team has been out making the rounds with a European premiere in London last week, followed by a historic event in Lagos, Nigeria on Sunday — the first time a Marvel movie has premiered in the country — and a Mexico City launch. There have also been event screenings in such major cities as Paris and Berlin.

On the first Black Panther, the top five international markets were China, UK, Korea, Brazil and France. Whether Wakanda Forever gets into China is still up in the air, but there has been no Marvel movie approved since Avengers: Endgame in 2019 while overall the market has just not been playing ball with Hollywood over the past year.

Expect a robust pop on the specialty side with the Steven Spielberg directed autobiopic The Fabelmans finally opening off its heat from a TIFF world premiere back in September where the pic won the Oscar bellwether trophy, The People’s Choice Award. The Amblin-Universal Pictures title begins its platform run at four NY and LA cinemas: NY’s Lincoln Square and Union Square and LA’s The Grove and Century City. The movie starring Paul Dano, Michelle Williams, Seth Rogen, Judd Hirsch, and Gabriel LaBelle goes wide on Wednesday, Nov. 23. Rotten Tomatoes Critics love it at 94% Fresh.