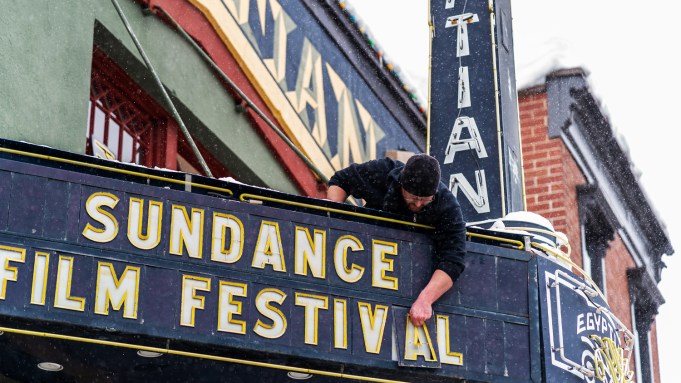 Yutani marveled about the doc lineup at this year’s 39th edition. She said, that Justice “focuses on the allegations against Brett Kavanaugh and the investigation that ensued. It’s a very powerful documentary, we felt it was important to add. We saw it practically yesterday. It challenges existing narratives and asks tough questions.”

The pic premieres on Friday at 8 30pm.

Commenting on the winds of change with indie films coming out of the pandemic, titles which are faced with a Sophie’s Choice in this day-and-date between a lucrative streaming deal or risky big screen launch, Sundance Institute CEO Joana Vicente said “I feel film festivals are more important than ever.”

“They create a space where we come together to celebrate film and new voices. To have those moments being surprised, to go into a a screening where you know nothing about it,” she said in symposium with Yutani, newly appointed Sundance Film Festival Director and Head of Public Programming Eugene Hernandez, and Senior Programmer & Strategic Initiatives Director John Nein.

“There’s been a lot of consolidation in the industry; theatrical distribution is difficult for specialty films: How do we get people to be curious about these films? They can shake you, they take risks…they challenge the status quo,” said Vicente.

“How do we call attention for these individual films? It’s more important than ever,” the Sundance Institute CEO said, “How do we continue to built a way that we have a vibrant ecosystem.”

In a notable change that the festival is opening up: Films are no longer debuting on the virtual portal day-and-date with their premiere, rather they’re delayed by one day. Publicists on key sales titles aren’t sending out screeners, rather insisting that the media attend premieres in person to relish the in-person resonance. Sales agents took umbarge with the fest’s decision to stick to a virtual component as they look to stoke the fire on their slates.

Vicente said that whether Sundance remains a hybrid festival going forward remains an open question. Digital subscriptions were great, and signifies a demand for the festival to be seen in such fashion.

The group was asked about last year’s controversial movie Jihad Rehab, a title which was pulled after outcries. Where does such fare stand with the fest going forward?

Vicente said, “I think we live in the space where we need to show films that we feel have the artistic merit to be in the festival, but they might be pushing the envelope. That’s the space that Sundance occupies. I don’t think we should shy away from controversial films.”

Sundance founder Robert Redford announced he was stepping back from the festival back in 2019, taking a more back seat role. This was followed by long-running festival director John Cooper’s exit in 2020.

Sundance Institute director of documentary film, Tabitha Jackson replaced Cooper in February 2020, but immediately faced headwinds into the pandemic. While other film festival managed to get up and running, starting with the Venice Film Festival in late 2020, followed by Cannes, and TIFF in 2021, Sundance was sidelined in 2021 and 2022. Jackson departed in June last year with Yutani promoted to the senior leadership team. Former TIFF co-head and indie producer Vicente was named Sundance Institute CEO in September 2021.