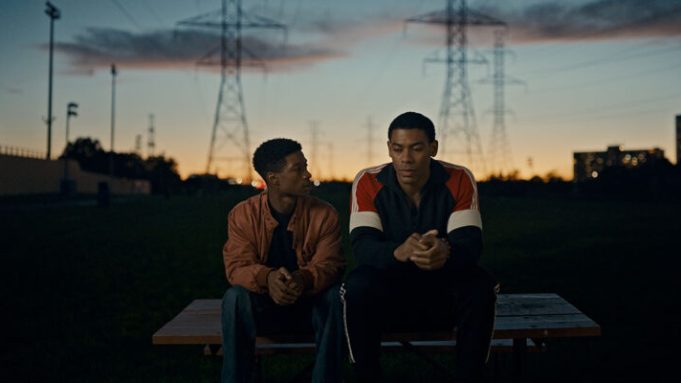 There is an abundance of Black dramas that chronicle trauma without the care it deserves. Rife with anti-Black stereotypes, the cinematic elite often celebrates these narratives while independent films (that are usually 10 times better) are thrown to the wayside and forgotten. Clement Virgo’s latest project, Brother, which is based on David Chariandy’s novel and had its world premiere at the Toronto Film Festival, has a delicate balance of story, acting and violence that sends a message that even though the struggle is real, compassion for one another will prevail.

Francis (Aaron Pierre) and Michael (Lamar Johnson) are brothers who immigrated to Canada in the 1990s and are fiercely protective of each other. Francis, in particular, has his foot in different worlds: one of violence and danger and the other of his family. The film also follows Michael as he navigates a suburban landscape and his own temptations with the dark side. One brother is on a particular path, while the other brother is trying to catch up but looking more like an outsider in a community he is familiar with. What sets Brother apart from other films of this type is its focus on family and how, amid environmental changes, boys are forced to become men before they are ready.

There are three storylines in Brother that parallel one another, and Virgo keeps all three at a steady pace, and it never gets muddled. He knows how to talk to the audience through visuals. The story is filtered through a familiar gaze that speaks to folks of specific communities while also broadcasting a universal message of what it means to be an outsider. The palpability of this should be attributed to the performances of Pierre and Johnson.

The casting could not be more perfect. There is a vulnerability the actors project onto the audience that hits hard. The stigma of Black males upholding a macho image has left many feeling repressed and alienated because weakness is suppressed. Pierre and Johnson aren’t held back or cornered into being a one-dimensional stereotype. They are given the freedom to express the inner thoughts of their characters. None of this would work were it not for these young men taking on the journey of sadness and burden Francis and Michael face, and it shows two talented actors who are fearless and confident in their abilities. They are brilliant.

Brother is a film that reaffirms why I love movies. The narrative asks so many vital questions about Black life and masculinity, but most of all: If Black boys are raising themselves to adulthood, where do they turn for support? This is the ultimate dilemma Francis and Michael find themselves in. Brother isn’t just another “Black” film. This is a vital piece of cinema that hasn’t received the buzz it deserves. I don’t want to see this fly under the radar, and I hope others will be open-minded enough to witness the genius of Clement Virgo and these young actors.