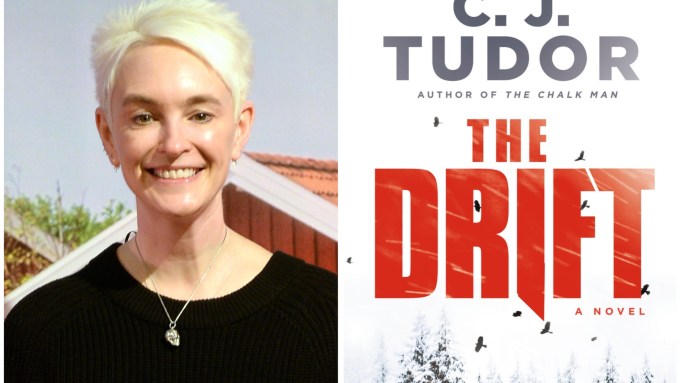 Irvine Welsh’s Crime and Marcella producer Buccaneer Media and Chicken Soup for the Soul-owned Halcyon Studios, which is behind Prime Video’s Hunters, have won the rights to adapt the book following a competitive, hotly-contested six-way situation.

The companies bought the TV rights from Hannah Ladds at Madeleine Milburn.

The Drift, which Penguin Random House imprints Penguin Michael Joseph in the UK and Ballantine in the U.S. are publishing in January 2023, tells the story of three groups of frightened teens who find themselves thrown together in a frozen post-apocalyptic world. One group is involved in a coach crash, another wakes suspended across a ravine in a broken-down cable and the third hunks down in an isolated sky chalet, and stalking all three is an even greater danger.

For Tudor, who has been called “Britain’s female Stephen King” by UK newspapers, The Drift is her latest reality-warping novel, following Sunday Times bestseller The Chalk Man, The Other People, The Hiding Place and The Burning Girls. Buccaneer is already in production on a drama series version of the latter, which stars Samantha Morton and Ruby Stokes and is for Paramount+.

Richard Tulk-Hart, joint CEO of Buccaneer, said: “It’s great to be working on another of C.J’s books and bring it to the screen. Partnering with Halcyon Studios is incredibly exciting and something we’ve looked to do for some time. The scale of this project finally brought us together.”

London-based Buccaneer has been on a roll recently. Last week, its Irvine Welsh drama for ITVX and BritBox International bagged star Dougray Scott a best actor win at the International Emmys, and it is making a pair of shows for Paramount+, Tudor’s The Burning Girls and The Doll Factory. Halcyon, meanwhile, counts Hunters and Disney+’s The Mysterious Benedict Society among its credits.

“The Drift is a masterful squall of suspense and we’re thrilled to transforming C.J.’s novel into a riveting series alongside Tony Wood and Richard Tulk-Hart,” said David Ellender CEO of Halcyon Studios. “Since 2019, Buccaneer has built a robust production entity that has created some of the most engaging content in the industry”.

Tudor said she was “bowled over” by the pair’s “enthusiasm for The Drift” and backed their vision for the project.