California suffered the steepest decline in scripted TV series production among the nation’s top filming destinations in the 12 months since the Covid lockdown began to ease in June 2020, compared with the same period a year earlier.

Series production in the state fell by 39% – down from 159 shows to only 97 – according to the latest report from FilmLA, the city and county film permit office, The report notes, however, that television production in Los Angeles “has risen again to pre-pandemic levels.” 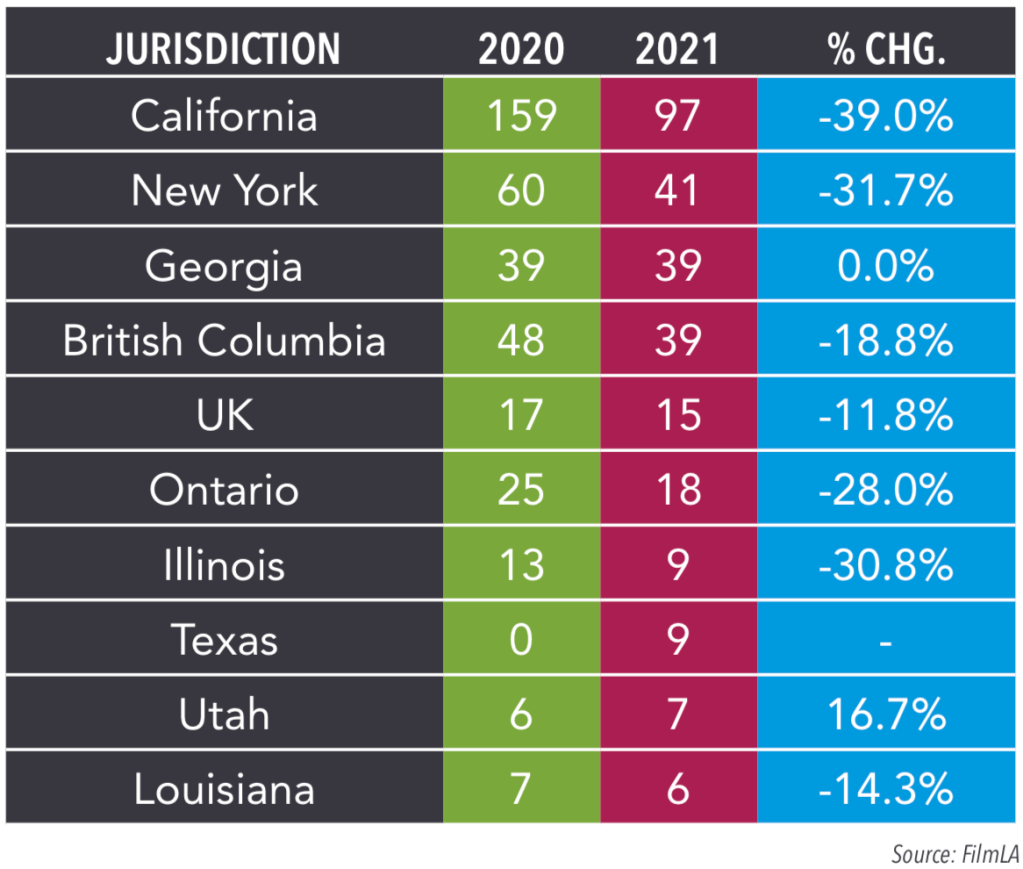 Despite the decline, California still had more scripted series and streaming production during the year than the next two top locations combined: New York and Georgia. Series production in New York fell by 31.7%, down from 60 series to 41, while Georgia experienced no decline at all, holding steady at 39 productions.

“Georgia is one of the production centers that had an earlier return to production during Covid,” FilmLA explained. “The pandemic shut down production in Georgia for two months last spring, compared to three months for Los Angeles and most other jurisdictions.”

“The slowdown that Covid created in the television production chain continues to be felt after one-and-half years into the pandemic,” FilmLA said in its 2021 Television Report. In Los Angeles, however, shoot days for TV dramas in the second quarter of 2021 were up by 120.7% over their five-year quarterly average. “This signals that production is returning, but the production pipeline logjam remains for the time being.”

The report notes that in the second quarter of 2020, the global Covid pandemic “brought scripted television production – along with production of other forms of filmed entertainment – to a halt.” FilmLA estimated that about 198 U.S.-produced, English-language television series were either shut down or unable to commence production between mid-March and mid-June that year. “Production slowly returned last summer (2020) and was then hit with another slowdown due to a second Covid surge in late fourth quarter 2020/early first quarter 2021.”

The report says that although the arrival of additional streaming services this past year like HBO Max, Peacock and Paramount+ “was expected to push the number of original series in production to new highs,” instead “the pandemic forced dramas and other scripted TV shows to postpone shooting. As a result of production delays, many series that would have aired in the last 1 ½ years are either still in production or nearing completion.”

Looking back at production trends over the last 10 years, “streaming services now dominate the television industry,” the report says. “In this cycle, streaming series comprised 43% of the total, followed by cable at 33% and broadcast at 24%. Overall, the average number of series aired on streaming platforms grew at an average annual rate of 35.4%, compared to just 2.2% for broadcast series. Production of cable shows declined at an annual rate of 1.8%.” 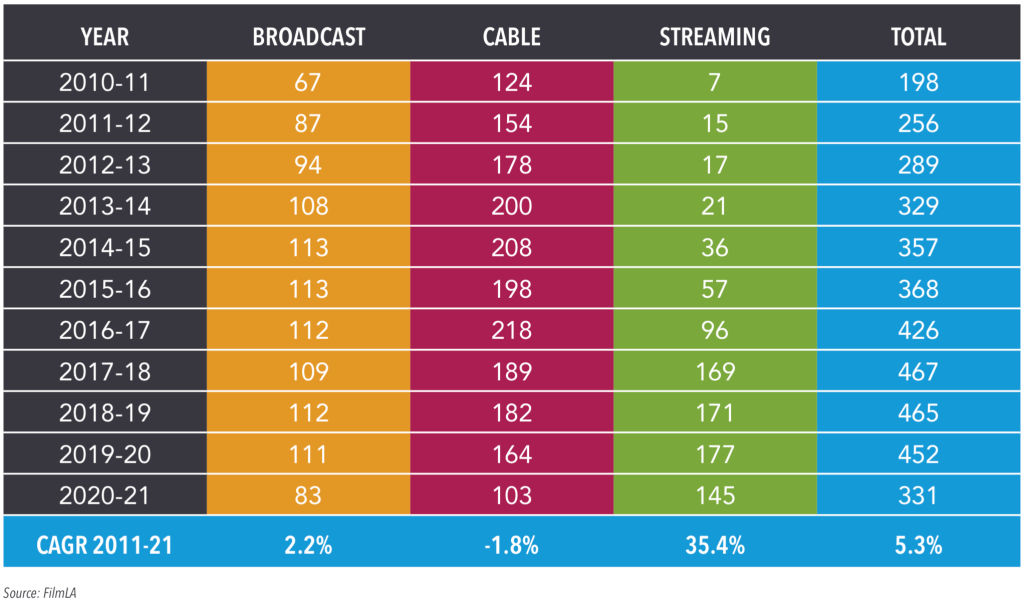 The report also found that “because of the Covid shutdown and sporadic production restarts, the number of series available for viewing in the 2021 cycle – a total of 331 – declined by 26.8% for a numeric difference of 121 fewer series. Some series slated for production were un-renewed because of Covid-related impacts, shorting inventories further down the line.”

The California Film & TV Tax Credit program in the 2021 cycle covered 13 series, accounting for 13.4% of series filmed in California, generating an estimated $693 million in expenditures. “Since many series were delayed this year, the number of series and expenditures would have been considerably higher in the absence of the pandemic,” FilmLA said. “Nevertheless, the employment impact of those 13 series that aired in 2021 generated approximately 3,009 cast hires, 2,367 crew, and 58,824 extras.”