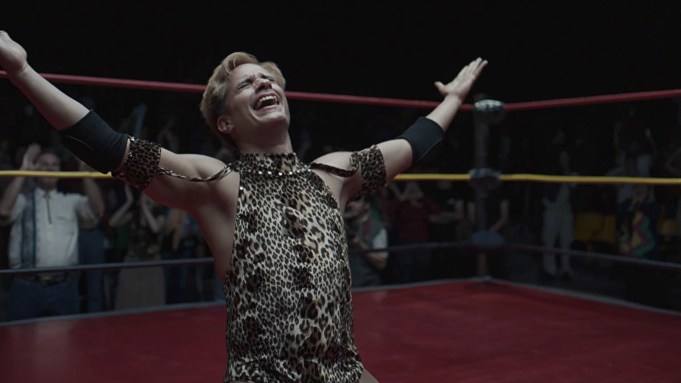 So far nearly all the 2023 Sundance Film Festival films I have seen are based on true stories, from a teacher in Radical, to a gay single father in San Francisco circa ’70s and ’80s in Fairyland, to Michael J. Fox as himself, and now yet another iconic character gets his story told on the big screen. World Premiering at Sundance tonight is Cassandro, a wild story of the first openly gay wrestler in the ultra macho sport of Mexico’s Lucha Libre.

Although the Lucha Libre and their outragous contingent known as the Exotico is a well-known in Mexico, it is not so well known outside of the country. That is about to change thanks to this film which represents the narrative feature film debut of Oscar-winning documentarian Roger Ross Williams (Life Animated), who became fascinated with the life of famed wrestler Saul Armendariz — aka Cassandro — when he made a short docu on his life. Sensing this was perfect material for a theatrical movie, he joined with writer David Teague to develop a script and got it to Gael Garcia Bernal who wisely said, “Yes.”

This is a role rich with twists and turns and a character unlike any other on screen in quite a while. Playing a wrestler worked out well for Mickey Rourke. It ought to do the same for Bernal, who grabs this part and runs with it.

Set at the Mexican/American border in El Paso, Saul is an amateur wrestler, not really going anywhere, who lands meager roles as part of the Lucha Libre, but he can’t find his niche there. Not wanting to go the overly-flamboyant route of some of the Exotico, he needed something to stand out on the macho side of top wrestling stars like the colorful Gigantico, The Masked Massacre, El Mysterioso and superstar El Hijo del Santo. All of the aforementioned have cameos as themselves here.

The creation of Cassandro comes as Saul hits dead ends before finally joining forces with a female wrestler Sabrina (Roberta Colindrez) who sees something in him that could be special. She agrees to be his trainer and mentor, developing the act that would become Cassandro and grabbing attention by daringly admitting he is openly gay, the first to do so in the sport.

Tagged the “Liberace of Lucha Libre” for lavish costumes, the film depicts his rise to the top, one match after another. It also focuses on his loving, totally dependent relationship with his enthusiastic mother Yocasta (a wonderful Perla de la Rosa) who supports him every step of the way. There is also a closeted gay man named Gerardo (a very fine Raul Castillo) who is married with kids, but keeps a secret life with Saul quietly on the side. Williams doesn’t hold back on the rather graphic sex scenes but the relationship is subtly and poignantly well developed in the story.

Also in the supporting cast are Joaquin Cosio as Lorenzo the tough agent/booker, and an interesting turn from Benito Antonio Ocasio Martinez (aka Bad Bunny) as Felipe, a young man looking to climb the ladder and seeing to every need Cassandro has.

Authentically Spanish language, this film could have been a Hollywoodized production but instead feels real; It doesn’t want to exploit Cassandro, but rather shows him as the man he is, and how he became such a success and shining example, particularly for young gay kids in macho Mexico. Bernal excels in the many wrestling scenes, also nailing the all-important showbiz touches that make this man the star he is.

Producers are Gerardo Gatica, Todd Black, David Bloomfield, Ted Hope, Julie Goldman. Bernal is also one of the Executive Producers. Amazon Prime Video will be streaming it sometime in 2023.