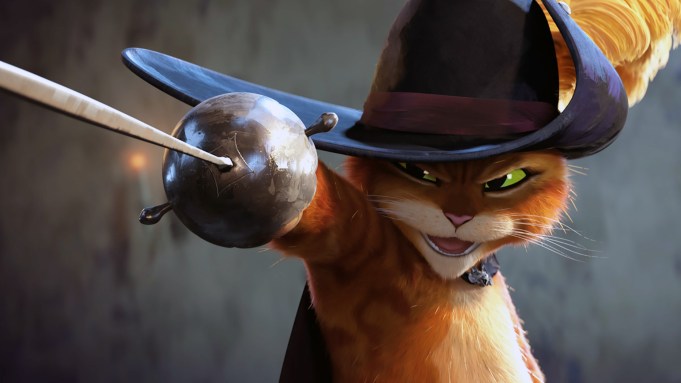 Universal/DreamWorks Animation’s Puss In Boots: The Last Wish is a bonafide puss in loot, as it will cross the $300M mark globally with today’s grosses included.

The highly reviewed sequel and Shrek spinoff is at $297.8M with Sunday’s worldwide actuals included. Directed by Joel Crawford and Januel Mercado, the adventure has surpassed Croods: The New Age and Encanto to become the third-biggest studio animation title of the pandemic era, both overseas and globally.

Puss 2 currently sits behind two other Universal animated films (Minions: The Rise of Gru and Sing 2) across the pandemic years. In the near-view rear-view, 2022 has now become the first year since 2008 where every DreamWorks animated release outgrossed every Pixar and Disney Animation release during the same year.

The Antonio Banderas/Salma Hayek sequel went out early overseas, and took time to swashbuckle in earnest, building with great word of mouth and soft drops; as well as acting as counter-programming to Avatar: The Way of Water. Meanwhile, major markets of the UK and Japan are yet to open.

Puss is notably scoring in Latin America where it overtook No. 1 from Avatar 2 in Mexico this past weekend. Brazil is also cat people with $9.7M to date. While Avatar has higher ticket-prices, Puss had more admissions there this past frame.

Universal now has the Top 3 studio animated films since the start of the pandemic, and when including The Bad Guys (which had a great run in China) and The Croods 2, a total of five of the top six studio animated offerings globally and within the top four internationally.