Saturday Night Live‘s Cecily Strong will make her New York stage debut this December in an Off Broadway production of The Search for Signs of Intelligent Life in the Universe, Jane Wagner’s classic 1977 solo play that starred Lily Tomlin and was made into a 1991 film.

Tomlin and Wagner will serve as executive producers.

The play will begin performances Dec. 21 at The Shed’s Griffin Theater. The recently arrived Manhattan venue presents work in a variety of fields, from music and theater to sculpture and dance. Search for Signs will continue performances through Feb. 5, 2022, with an opening night on Jan. 11.

The production will mark Strong’s first stage role in New York, and will be directed by Tony-nominated Leigh Silverman (The Lifespan of a Fact, Violet). The creative team will include set design by Christine Jones and Mary Hamrick, costume design by Anita Yavich, lighting design by Stacey Derosier, sound design by Elisheba Ittoop, and choreography by James Alsop (Girls 5 Eva). 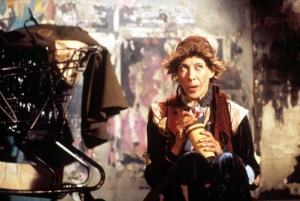 Lily Tomlin, ‘Search For Signs Of Intelligent Life In The Universe’ (1991)
Everett Collection

Described as an exploration “of American society, art, power, and the feminist movement through a comedic and quick-witted investigation,” Search for Signs cemented Tomlin’s stage career with its presentation of the various characters that would become among her most iconic, particularly the “bag lady” who serves as a sort of emcee.

The production is one of five shows announced today by The Shed’s Artistic Director and CEO Alex Poots for the venue’s winter/spring season, including two commissions that were postponed from 2020 due to the pandemic: Claudia Rankine’s new play, Help, and the exhibition Particular Matter(s) by Tomás Saraceno.

Best known for her work as a cast member on Saturday Night Live – this season marks her 10th – Strong received back-to-back Emmy nominations in 2020 and 2021 for Outstanding Supporting Actress in a Comedy Series. She recently starred on Apple TV+’s 2021 musical series, Schmigadoon!, on which she also serves as a producer. Her memoir, This Will All Be Over Soon, was released in summer 2021. In Chicago, Strong improvised regularly at iO and served as an understudy for the Second City Main Stage and E.T.C. shows.

The Shed’s upcoming schedule is as follows:

The Search for Signs of Intelligent Life in the Universe
By Jane Wagner, Directed by Leigh Silverman, and Starring Cecily Strong
December 21, 2021 – February 5, 2022
The Griffin Theater