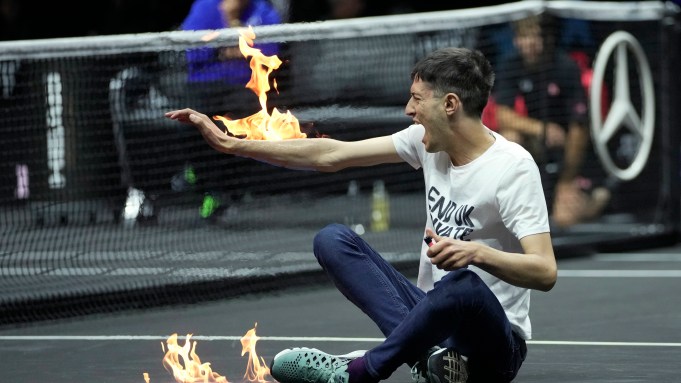 A man sporting a t-shirt protesting the use of private jets interrupted today’s Laver Cup tennis exhibition in London by igniting a small fire on the court and accidentally (and briefly) setting his arm ablaze.

The incident, which took place during a break in the match between Stefanos Tsitsipas and Diego Schwartzman, shocked onlookers, including Roger Federer, who reportedly was courtside in anticipation of his highly publicized doubles match with Rafael Nadal.

The protester was wearing a shirt with a words “End UK Private Jets.” The man ran on court at the O2 Arena in London and ignited a flammable liquid on the ground, accidentally setting his arm on fire in the process. He quickly doused the flame on his arm and continued sitting on the court before being removed by security. 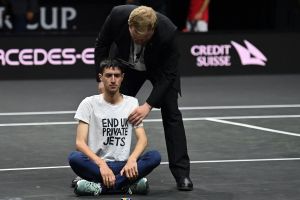 According Sky Sports, the protester was arrested on suspicion of aggravated trespass by Metropolitan Police and was transported to a hospital as a precaution.

Today’s big doubles match with Federer and Nadal (playing against Americans Jack Sock and Frances Tiafoe) is drawing worldwide attention since it will be the final match of Federer’s career (he recently announced his retirement). The match is expected to begin around 4:30 p.m. ET today.