The quest to create the perfect sandwich takes on existential tones in Clyde’s, the tasty if occasionally and slightly undercooked new dramedy from two-time Pulitzer Prize winner Lynn Nottage. Though it lacks the heft of the playwright’s great Sweat, Clyde’s makes for an intriguing companion piece.

Starring a scenery-chewing (and that’s not a slam) Uzo Aduba and a calming Ron Cephas Jones, Clyde’s is set in a truck stop sandwich shop in Pennsylvania, one of those last-chance places dotting America’s highways both concrete and metaphysical, somewhere between the roadside hash joint of The Petrified Forest and the Double R Diner of Twin Peaks. (Since its 2019 world premiere production at Minneapolis’ Guthrie Theater, and in the aftermath of the George Floyd murder, the play’s original title of Floyd’s was changed).

Even before the first bolt of flame erupts when a particularly devilish character tosses her cigarette to the floor, we suspect the menu at Clyde’s offers a heaping helping of magic realism to spice up that realistic kitchen set. Well, almost realistic: Set designer Takeshi Kata frames everything within a skewed, neon blue Googie Architecture proscenium that immediately suggests some sort of platonic diner ideal. Lights dim (courtesy designer Christopher Akerlind) and tones hush (the sound designer is Justin Ellington) in comically spooky ways when folks are about to wax profound. Quirky little touches of stage business suggest we shouldn’t take everything we see at face value.

The first characters we meet are Clyde herself (Aduba, of In Treatment and Orange Is The New Black), the tough-as-acrylic-nails owner of the place, and Montrellous (This Is Us’ Jones), the shop’s Zen sandwich maker who dreams of elevating the shop from greasy spoon to something far more ambitious, a place where he can create the elaborate sandwiches of his ever-reaching imagination.

Clyde will have none of it, desperate as she is to stick with the cheese-on-white and tuna melts that make the bucks needed to pay off what may or may not be some serious gambling debts. 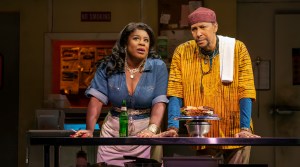 If Clyde’s manner with the elder Montrellous is abrupt, her treatment of the lesser kitchen staff is downright demonic. There’s Letitia (a fierce and poignant Kara Young), the Black single mother raising a daughter with severe disabilities; Rafael (Reza Salazar, appropriately manic and determined), a Latino whose lovestruck bravado with the dismissive Letitia melts into cowering fear when the vicious Clyde comes barreling by; and Jason (Edmund Donovan, nailing the space between intimidating appearance and vulnerable interior), a white man just out of prison whose Aryan Nation-style neck and face tattoos are his very own mark of Cain.

If this last character sounds familiar, it’s because he is the direct link to Sweat, Nottage’s 2017 Pulitzer winner that detailed, in realistic, near-documentary style, the damning effects of a global economy on the hardest hit workers of a Pennsylvania factory town. Here, Nottage has followed the violent, prison-bound Jason of Sweat to his post-prison bid for redemption at Clyde’s.

And he’s come to the right place. Everyone at Clyde’s – including Clyde – is an ex-convict, each striving for some sort of reclamation, material, spiritual or a combo platter. The kitchen staff, including Montrellous, put up with Clyde’s viciousness – Rafael didn’t get that massive bruise on his torso from tickles – because they have nowhere else to turn.

Taking the brunt of Clyde’s negative attention is newcomer Jason, the target of Clyde’s sexual harassment and humiliating cruelty. She even threatens to make up lies to tell his parole officer to keep him in line.

Clyde, if you haven’t guessed by now, just might be the devil’s stand-in reigning over this purgatory, capable of raising hellfire (literally) and terrorizing her minions on the daily. Dressed in a smashing array of boldly provocative outfits, often with considerable displays of black leatherette and flourishes of devil-red and midnight blue (Jennifer Moeller is the costume designer), the soul-crushing Clyde (and the play named after her) never quite goes full-on surreal, but the flashes of magic realism Nottage and her frequent collaborator and director Kate Whoriskey weave throughout the workaday grind leave no doubt that they have some soul-nourishing on their minds. 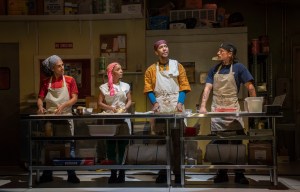 When the put-upon kitchen staff finally gets some bucking up in the form of an unexpected rave from a newspaper critic, Clyde is quick to kill the mood. “Don’t disappoint me by having aspirations,” she bullies. “Social hour’s over. Pick up the pace, or tomorrow I can get a fresh batch
of nobodies to do your job. And I’ll make sure you go back to whatever hell you came from.”

Fortunately, the group has an angel: “Montrellous,” says Letitia, “is a sensei. Drops garlic aioli like a realness bomb. He knows what we only wish to know.” An inspiration among the kitchen staffers, Montrellous dispenses Zen advice and messages of empowerment with all the feeling he brings to his culinary tasks. He’s father confessor, guru and tough-love dispenser all in one big bundle of grace. Here he is describing his latest sandwich creation:

It’s about order, baby. I’m interested in the composition,
it’s not merely about flavor. Dig? I think about the
balance of ingredients and the journey I want the consumer
to take with each bite. Then finally how I can achieve
oneness with the sandwich.

When Letitia despairs of ever achieving oneness with her own creations, Montrellous reassures her with what might be the only loving words she’s heard all week: “Think about your daughter,” he advises, “what if you could create something perfect for her? Something that reflects your love. What if you took the few minutes it takes to really prepare that sandwich? What if you decided to say with every drop of your special sauce ‘I love you, Carmen.’ What if this sandwich represented your love….”

For the audience, though, Montrellous’ compassion and forgiveness might be even more impressive if Nottage hadn’t stacked the humanity deck so blatantly. With one exception, the past crimes committed by the lost, sandwich-making souls of Clyde’s are constructed with a pretty heavy hand: Montrellous took a prison rap so his younger brother could accept a college scholarship, while Letitia burgled a pharmacy to get meds for her ill daughter. Rafael was zonked out of his gourd during his criminal misadventure. Only Jason, expressing a lot of pent-up rage when he bashed a scab factory worker, seems to have had largely selfish reasons for his criminality, and he’s tearfully sorry for it (and for the prison ink he got as a survival tool on the inside).

All in all, they’re a fairly easy bunch to forgive, and while that might well be a creative choice on Nottage’s part – perhaps she’s suggesting that everyone has his or her reasons for crossing whatever lines they cross – it can also feel a overly sentimental and woo-woo. Perhaps that’s why Clyde, played to a deliciously evil fare-thee-well by Aduba, is pitched at such an outlandish extreme: She’s the cayenne that keeps this recipe from overdosing on sugar.

Whatever its shortcomings – one character’s drug relapse, for example, is mentioned and forgotten, and the play’s final, fiery and otherworldly moment doesn’t have the impact it should), Clyde’s is a surprisingly convivial enterprise, funny and warm and with just enough slap to keep from tilting too far towards the gooey.

In fact, halfway through you might be struck by the notion of what an engaging sitcom this play could make, but then you might also realize that it already has. For all its present-day concerns, topicality and up-to-the-minute compassions, Clyde’s is Taxi with poetic garnish. It’s not hard to imagine Danny DeVito’s Louie De Palma sharing tactical advice with Aduba’s Clyde, or Judd Hirsch’s Alex Reiger offering a sympathetic ear to Jones’ Montrellous. Nottage has recast a winning recipe for the post-Trump era, and through sheer determination and heart keeps all but the very edges from a whiff of staleness.

All the more reason to welcome the recent announcement that the final two weeks in January of Clyde’s limited engagement will be made available for livestreaming. That’s an experiment worth having, and Clyde’s is fit to order.