Daniella Pineda puts her own spin Cowboy Bebop femme fatale Faye Valentine in Netflix’s live-action adaptation of Shinichirō Watanabe’s celebrated 1998 anime. As the bombastic, irreverent yet secretly sensitive bounty hunter, Pineda brings new life to the anime classic with co-stars John Cho and Mustafa Shakir, who appear respectively as Spike Spiegel and Jet Black. Together, they comprise the motley crew of space bounty hunters aboard a floating hunk of metal named the Bebop in search for prize criminals throughout the galaxy, while outrunning their pasts.

Ahead of the series’ premiere on Friday, Nov. 19, the Jurassic World: Fallen Kingdom and The Originals alumna spoke with Deadline about taking on the beloved anime character, overcoming internet haters, Faye Valentine’s new layers and more. 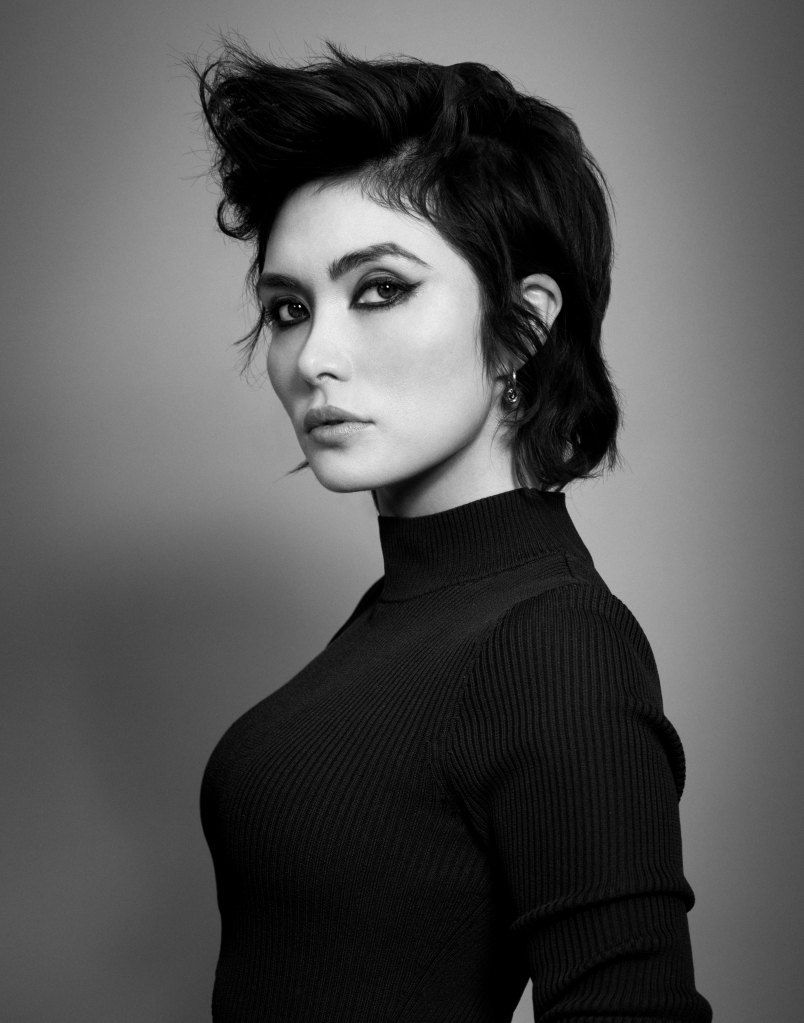 “I had never done anything remotely as involved and important as this, because it’s important to so many fans and other people,” she said. “Having completed this, I realize I really am capable of doing a lot just in my personal life and as an actor.  Our show feels really big, and I feel honored that I could be in something so grand and make it all the way through, thank god.”

Read the full interview, which has been edited for length and clarity, below.

DEADLINE: Faye Valentine is an iconic character in the anime world, what about her spoke to you?

PINEDA: Faye was really easy to tap into. It’s kind of like putting on a glove. The writers did such an incredible job of expanding and going in depth into her personal story, deeper than the anime did. Her experience in the world being someone who knew nothing of their past, who doesn’t even know what kind of food they like, what their preferences are – that was really fun to explore and play off of. If there is a through line with all of the parts that I’ve played, they all seem to be intelligent, quick-witted, bold women.

DEADLINE: In addition to assuming her personality, you also had to take on her fighting skills – from knife-fighting to mano a mano combat. What was the training process like?

PINEDA: It was my first time training for a part. I’ve always liked to workout, but this is not even in the same stratosphere. I started training in Los Angeles with the 87eleven, which is the John Wick stunt team, and that was just so intense. Then we joined Allan Poppleton our head of stunts, who’s incredible. We did rolls. We did sword fighting. We did fist and footwork. It was really rewarding and really intense, and after having gone through that, I have this whole new respect for people who do action film. Thank god for my stunt double, Jayde Rutene.

Having gone through the training, it makes sense why we made adjustments to the costume. I think it was everyone’s intention to keep the original costume, but with that original costume, you can’t hide gels and knee pads. You can’t have Faye be live-action and a fighter and doing all this incredible crazy stunt work and not have a little coverage. That’s the primary reason why adjustments were made to the costume.

DEADLINE: Speaking of which, first pictures of you as Faye caused quite a stir among the fanbase, with a handful of people criticizing differences from her original look. What was that moment like for you?

PINEDA: It was definitely my first interaction with very, very vocal trolls. Social media gives access to pretty much anyone who wants to say anything. Although I feel like some people would be disheartened, I found a way to clap back. with that video that I gave, which was very cheeky and silly. Rather than stay quiet, which is usually what everybody wants you to do, I just felt so inclined to say something. I felt like that response was definitely in the spirit of Faye. Also I got Steve Blum’s blessing, the voice of Spike, who backed me up and I was like, “All right guys, I don’t care what you say, if that guy backs me up, no one can say anything.” 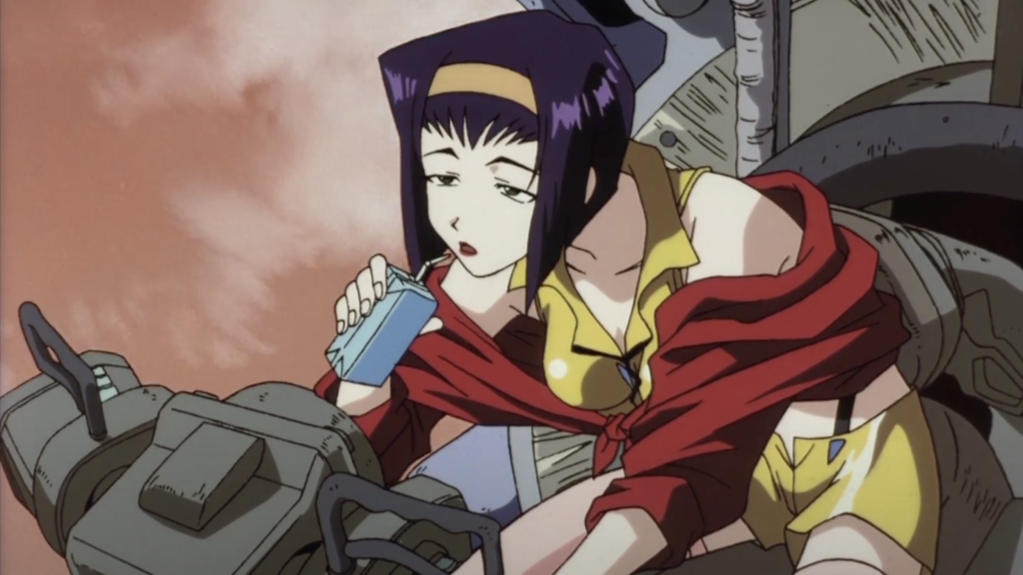 DEADLINE: Your cheeky response to the criticism helped a number of people believe you were a solid choice for Faye. It must have been a nice thing to see on your end.

I didn’t even think about it when I was doing it until after the fact. I also was not expecting that to get any attention at all.

DEADLINE: In the live-action adaptation, we get new layers to Faye and her story, including her romantic life and who she finds attractive. Why do you think it was important to expand on Faye’s sexuality?

PINEDA: I think that that was a very clever device in exploring Faye’s predicament, which is that she has been cryogenically frozen for so long, so she doesn’t know not only who she is, but she doesn’t know what her preferences are. I think that that expands from food to dogs and cats to her sexuality, and so, I feel like that was a device of basically someone who was exploring and trying to understand what they like, and therefore who they are.

PINEDA: I think you’re just going to have to wait and see because season one’s Faye is still exploring, so I can’t answer that. 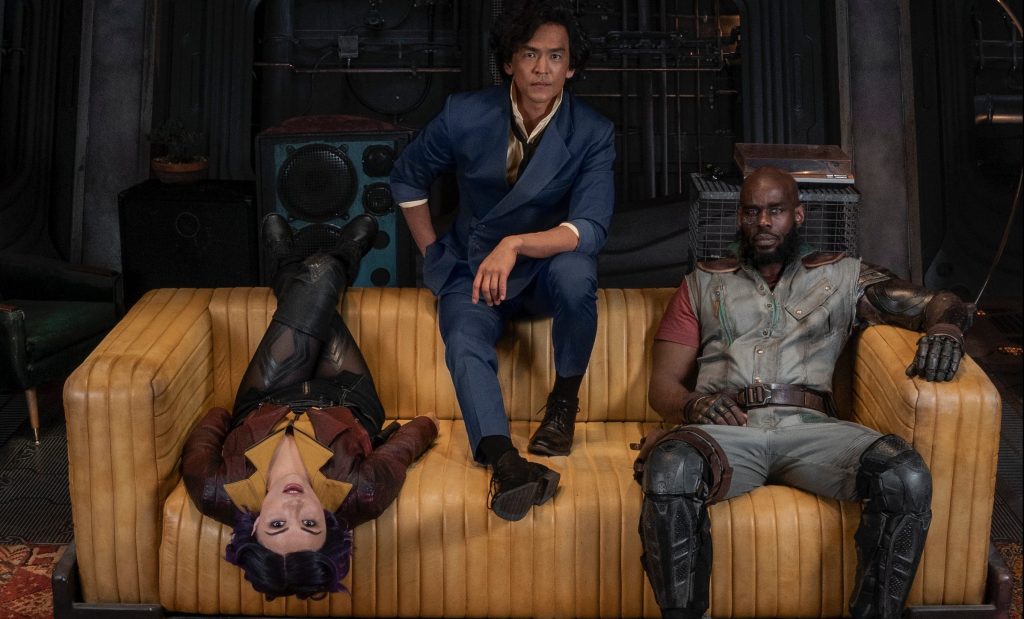 DEADLINE: Netflix’s take touts a diverse cast with you, John Cho and Mustafa Shakir taking the lead. What does it mean to you to be part of a diverse portrayal of the ragtag crew?

PINEDA: It is really important for our show to explore a multi-cultural future where we’re no longer hung up on what divides us, but rather we’re all humans who survived, and now we’re trying to continue to do so in space. I think representation is incredibly incredibly important. I hope with my role as Faye Valentine, as someone who is Mexican American, that this paves the way for other Latinos to be in parts that aren’t even centered on who they are as far as their ethnic identity, but that they’re heroes in their own right.

DEADLINE: When the gang all gets together in the show, they start off as strangers but eventually become this tight-knit family. Was that dynamic at all similar to yours with your co-stars upon shooting?

PINEDA: It definitely was. I think for all three of us it was the most challenging shoot that any of us have ever been a part of. I think that we did a lot of our bonding in the training process and the boot camp. We found our connection through suffering, which was really rewarding and fun, but man, it was really tough. I also feel like we went through so much together because we were a part of a project that prevailed during the pandemic. I think that also really brought us together, and when we came back together after the break, after COVID, we were all so fortunate to just be in each other’s company and to make it to the finish line together. I’ll always love those two, and I think if anything, it was the circumstances of the world that also brought us together in addition to the characters. 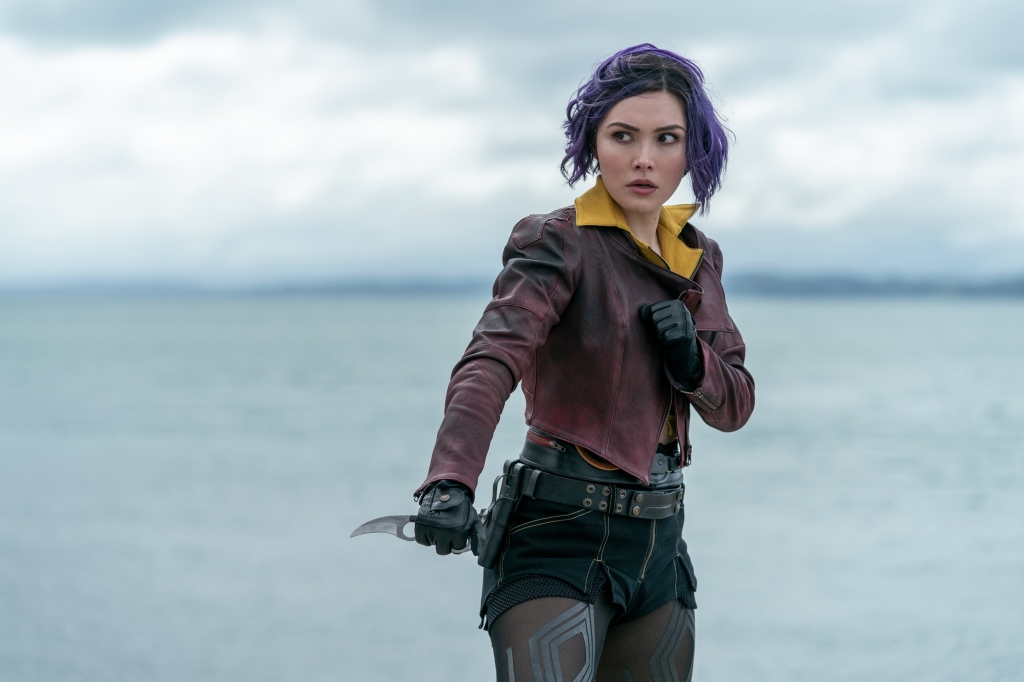 DEADLINE: Take me behind the scenes. How did you and the rest of the Bebop gang get into the swing of things?

PINEDA: Alex Garcia Lopez always played music and always played jazz and always played bebop. I think sometimes people forget that bebop is a type of jazz music, a particular era of jazz music, and so, that was always present. The facility where we trained in was covered from floor to ceiling in Bebop pictures and Bebop merch. I feel like if there was a boom in Bebop purchasing of merch in 2019 and 2020, it was probably because we bought it all. We were just sort of in a really lovely bubble of celebrating the anime wherever we could, and if there was a TV in a room, it always had Bebop on. I mean, I can’t stress enough how we always just had that with us.

DEADLINE: Now having taken on Faye Valentine, what do you think you learned about yourself?

PINEDA: I had never done anything remotely as involved and important as this, because it’s important to so many fans and other people. Having completed this, I realize I really am capable of doing a lot just in my personal life and as an actor.  Our show feels really big, and I feel honored that I could be in something so grand and make it all the way through, thank god. I guess even I wasn’t aware of my resilience in some instances, so that was a surprise to me.