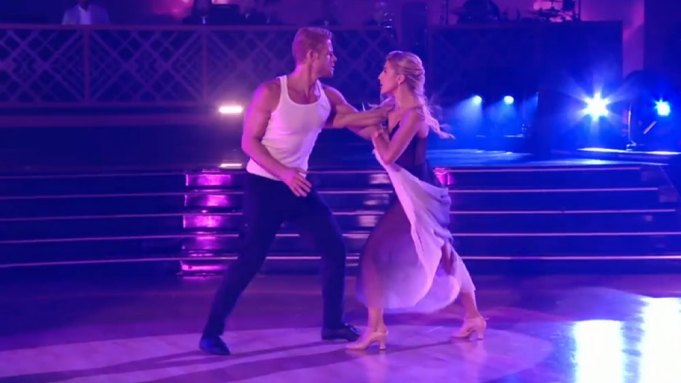 It’s most memorable year night on Dancing with the Stars! It’s also the halfway point of season 31, which means if you haven’t subscribed yet to Disney+ to watch your favorite pros, then you probably never will. And that’s okay! We watch so you don’t have to.

Bring on those unforgettable moments from the past!

Selma Blair and Sasha Farber. Once she was finally diagnosed with MS in 2018, Blair felt the “beginning of my recovery as a person.” But like a record scratch, Blair followed up her most memorable year with very sad news. After undergoing a recent MRI, doctors told Blair that she couldn’t go on with the competition. “I’ve gone as far as I could,” she told Farber during the rehearsal package. She went on to explain how the dancing was doing “extensive damage” to her bones so she had no choice; her time in the ballroom was over. She then performed her final number — a waltz to “What The World Needs Now is Love.” “This competition is tough for everyone, but if the other have climbed hills, you have climbed mountains,” said Len Goodman. “Congratulations.” Pretty much everyone was brought to tears after that. Score: A Perfect 40!

Jessie James Decker and Alan Bersten. The singer’s big year was in 2014 when she became a mom. Cool, cool. She then performed a ferocious tango to her tune “Blue Jeans” before giving her daughter a big hug in the audience. (Her small son, though, had to settle for cuddling her leg). “There was a good amount of tango,” said Goodman. “It was sharp, it had attack. Occasionally you got a little on Alan’s right side. It had purpose and it had determination. Well done.” Score: 29 out of 40

Trevor Donovan and Emma Slater. The actor thought his acting days were numbered in 2007 after he lost his gig on Days of Our Lives. Thinking he should go back to Mammoth and start a new career building houses, Donovan got a last minute reprieve from Hollywood when 90210 came calling. Nothing about that experience screams let’s jazz dance to Coldplay but Donovan sure performed the hell out of his number. “You didn’t force that dance, you didn’t over-try and push it right in my face,” said Goodman. “That gave it so much more control. Without a dance that was your best dance so far.” Score: 32 out of 40

Vinny Guadagnino and Koko Iwasaki. Guadagnino was a college graduate delivering pizza when he filled out an application in 2009 to join the cast of Jersey Shore. Virtually overnight, he was treated like a member of The Beatles and got to buy his parents a house. And look at him now! He’s dancing jazz in a pastel track suit and Chucks on DWTS. Enjoy it while it lasts, buddy; the competition is just too darn fierce this season. “I thought It was a terrific dance, it was clean. It was clear. You were tight and together, full of energy,” said Goodman. “Well done.” Score: 32 out of 40

Shangela and Gleb Savchenko. The Drag queen looked back on a hellish accident in 2013 when performing some sort of death drop during a performance. Shangela broke a leg and doctors said more dancing was out of the question. The rest, of course, is history: cut to Shangela performing a dignified foxtrot that brought the queen to tears at the end. “Sometimes getting an injury is a blessing in disguise,” said Derek Hough. “It makes you stop and appreciate what you have. It was so wonderful to see this side of Shangela.” Score: 32 out of 40

Jordan Sparks and Brandon Armstrong. The singer sweetly recalled the year 2017, when she met a man who was just looking for tips on how to break into the business. Five years later, he inspired a salsa as her husband on DWTS. Ain’t love grand? “Talk about spicy,” said Bruno Tonioli. “You have to make it look easy and spontaneous [in the salsa]. That is the hardest thing to do. You did it.” Score: 33 out of 40

Daniel Durant and Britt Stewart. Not surprisingly, the actor chose 2019 as his memorable year because that’s when he was cast in CODA — a small indie movie that exploded into an Oscar-winning hit. He paid tribute with a joyous and barefooted contemporary dance that left the judges all gooey inside. “You are so real, so honest, you have the ability to make me feel like I’m dancing with you even as I’m watching you,” said Tonioli. “It’s something very unique and special that you have.” Score: 34 out of 40

Joseph Baena and Daniella Karagach. The fitness model didn’t go deep in his memory bank to find a big year; he just went with 2022 and how he finally decided this year to “listen to myself and not listen to outside voices … I need to separate myself from expectations of me being like my father. This year, I know who I am.” And with that, he rumba’ed to “My Way” and gave what Goodman described as “his best dance so far this season.” (Carrie Ann Inaba also called it one of the best male rumbas ever on the show). Hey, that made Baena cry! Score: 34 out of 40

Gabby Windey and Val Chmerkovskiy. Before she became a bachelorette, Windey worked as an ICU nurse during the pandemic. “I felt the world was ending,” she recalls of 2020, her toughest year when she “saw a lot of death, isolation.” She dedicated her twirly and nimble foxtrot to the families and healthcare workers. “All that you have been through, I can’t even imagine,” said Inaba. “I just want to thank you from my heart. I feel like I understood you and how you dance more after seeing that. You are stunning and dazzling out there. I want to encourage you to let it go.” Score: 36 out of 40

Heidi D’Amelio and Artem Chigvintsev. She has to know her daughter is going to beat her, right? Yes, in fact, she does: mama D’Amelio opened her rehearsal package by saying she didn’t think she’d get this far in the competition. She then remembered the year 1997 and how she moved from Louisiana to New York to work as a model. Hey, that took a lot of gumption! So she tried to channel that into her taut rumba. “You have improved so much, it’s insane,” Hough said. “Your arms, the articulation in your feet. It was so clean and beautiful. I think you got some 10s in you. I need a little more emotion. But girl, that was solid.” Score: 36 out of 40

Wayne Brady and Witney Carson. The TV host looked back to 2003, when his daughter Maile was born. He then dedicated his foxtrot to his now 19-year-old “little buddy” who he wants to make proud. She was there too, to give him a big hug. “What you did for me, you captured the essence of love at first sight,” said Bruno Tonioli. “It was so beautiful.” Score: 37 out of 40

Charli D’Amelio and Mark Ballas. Like Baena, D’Amelio also choose 2022 because it was the year that anxiety stopped controlling her life. Despite her heavy social media presence, she said it wasn’t a lot of fun to have all those eyes on her so “I started going to therapy to find out why I was feeling the way I was.” What followed was a chilling, contemporary dance that not only showcased Ballas’ incredible choreography but proved how D’Amelia has this competition in the bag. “First of all, Charlie I just want to thank you for being such a responsible sole and telling that story,” said Inaba. “So many young kids look up to you … talking about the cost of your fame.” Score: 39 out of 40

Because Blair bowed out, there was no elimination on Monday. DWTS is back on Tuesday.