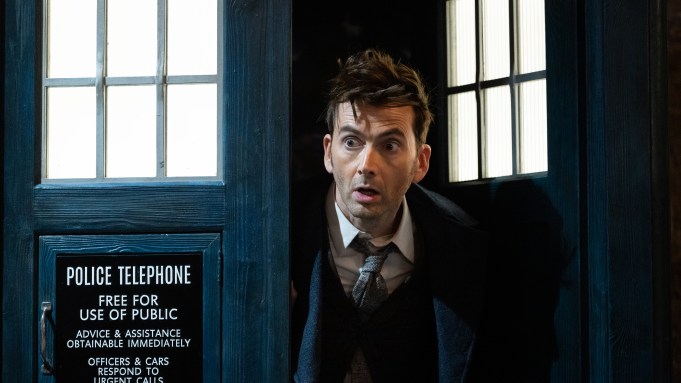 David Tennant returned to Doctor Who last night as the 14th Doctor after a 12-year hiatus and the Good Omens star said he was “worried it would be difficult to get in the groove again.”

Alongside Catherine Tate, who played Donna Noble during Tennant’s previous stint as the 10th Doctor between 2005 and 2010, Tennant appeared last night in Jodie Whittaker’s final episode. Fans were also treated to a sneak peak of the 15th Doctor, Sex Education star Ncuti Gatwa, who said: “What the hell is going on?”. Scroll down for a clip.

Speaking to the BBC’s Today this morning, Tennant said he was “worried it would be difficult to get in the groove again but it has been straightforward.”

“We’ve managed to keep the essence of the show and the world now has a very exciting moment to look forward to,” he added. “Doctor Who was a wonderful time in my life and it runs through me like a stick of rock so to be part of that show, go on that journey and return to it when I thought it was a memory has been an absolute present.”

While returning showrunner Russell T Davies is keeping things under wraps, Tennant and Tate are confirmed to appear in three special episodes of Doctor Who next year, as Gatwa’s rein as the Doctor gets underway. Another new castmember will be Netflix’s Heartstopper star Yasmin Finney, as Davies pivots the long-running series to target a new, diverse generation.

Gatwa will be the first Person of Color to play the role, Finney the first regular trans character and Whittaker was the first woman. The latter has led something of a revival, generating high ratings for the 60-year-old BBC sci-fi epic.

Davies said last night: “If you thought the appearance of David Tennant was a shock, we’ve got plenty more surprises on the way. The path to Ncuti’s Fifteenth Doctor is laden with mystery, horror, robots, puppets, danger and fun. And how is it connected to the return of the wonderful Donna Noble? How, what, why? We’re giving you a year to speculate, and then all hell lets loose.”