Nearly a decade after Showtime’s Dexter concluded after 8 seasons, serial killer Dexter Morgan (Michael C. Hall) is back in the limited series New Blood—and boy is he rusty. 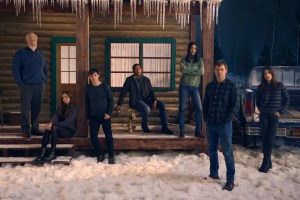 In Sunday night’s premiere, Dexter, who now goes by the alias of Jim Lindsay, is revealed to be far away from Sunny Miami and now living in Iron Lake, New York where he’s living with his sister, Deb (Jennifer Carpenter). Well, living wouldn’t be the right word since she actually died in the series finale.

Deb is back and living in Dexter’s subconscious as his new Dark Passenger. It is as yet unknown if James Remar will pop in at some point to reprise the role of Dexter and Deb’s dad, Harry Morgan—Dexter’s original Dark Passenger.

The episode also heralds the return of the Dexter’s son Harrison (Jack Alcott), who is all grown up and looking to reconnect with the only blood relative he has left. His mother Rita Bennett (Julie Benz) was murdered by the Trinity Killer (John Lithgow) in Season 4, and his adoptive mom Hannah McKay (Yvonne Strahovski) is no longer in his life either.

Oh, and after a brief break, Dexter has also started killing again but he’s made a huge mess of it all. Along with the passing of time, technology has advanced leaving Dexter exposed.

Hall spoke to Deadline about reviving the beloved antihero, the character’s hesitation to reunite with his son and more. New episodes will be released Sunday nights at 9 p.m.

DEADLINE: When we rejoin Dexter’s life, everything is totally different. He hasn’t killed anyone in ages and he’s living in this small, snowy town that’s a long way from sunny Miami. Would it be fair to say he’s rusty?

MICHAEL C. HALL: He says so himself, that he’s rusty in terms of leaving no trace. He’s rusty in terms of logistics of pulling off a kill, of making a kill room; in terms of being out of practice doing it and out of preparation. He doesn’t even have all the tools that he’s accustomed to having. So he’s improvising and playing catch up with himself and covering for mistakes that in the past he never would have made. And along with all the logistical stuff, he’s also having an experience of it that’s different. This is a guy who is on the other end of an 8-year commitment to abstinence from killing so reopening that door and re-engaging with that behavior is gonna feel very different from back in the day.

Would you say that you as an actor you were also rusty and sharing a similar experience with Dexter? Returning to something so familiar yet so far behind you, too?

If the character was feeling rusty, I could allow for whatever sort of weirdness went along with playing the character again to serve the performance. It was a trip! It was unlike anything I’ve ever been asked to do. To play something for 8 years, take about 8 years off, and he’s still alive and the cameras turn back on and you’re playing him again. It was wild but I was relieved if not also a little creeped out to discover that he’s still very much there and alive and familiar. 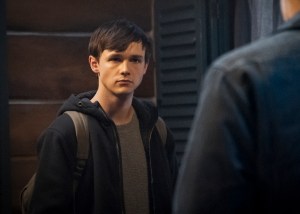 Dexter tried to turn Harrison away but all they have is each other. What a precarious time for Harrison to turn up.

When one door opens for Dexter, all doors open for him. He can’t just have a relationship with his son or just reacquaint himself with the dark passenger—he’s going to do both.

Can you dive into that a little deeper?

I feel like the show is a tease in and of itself. Dexter definitely took himself out of Harrison’s life because he was convinced that Harrison would be destroyed if he stayed close to him. Just like Deb was destroyed, and Rita, and so many other people. So when Harrison reemerges, I think Dexter experiences two opposite things at once: this deep fear that Harrison is like him and also this deep dark wish that Harrison is like him. He’s sort of trying to manage both those things. And I think as an audience, we’re sort of along for that ride. We ourselves wonder does Harrison have some version of the Dark Passenger? Is he his father’s son or not? I think a big part of that journey with that relationship is the two of them recognizing the things they’re keeping from one another are the things that really will—if they choose to reveal them—bind them. 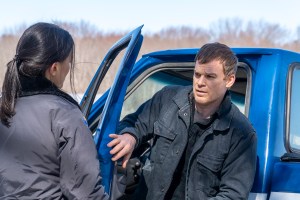 Is it too much to wish for Hannah to be Harrison’s Dark Passenger like Harry was for Dexter?

She’s dead, but I can’t definitely say yes to any of your speculations or wishes because it would ruin the wide-open landscape of possibility.

Anything you can tease about the return of Trinity? There’s that obvious connection between Harrison and the man who murdered his mom in cold blood.

Obviously, Harrison was formed by that experience. How much of it he consciously remembers or retrieves will be fleshed out as the season goes on. And Dexter himself, from that moment when he discovers Rita dead in that bathtub, he’s been reeling and still is. That’s a fundamental threshold in both of their lives. And if they’re ever able to compare notes about it, I think that would be a pretty powerful thing.