Diana, The Musical begins its Act II with the shirtless, well-toned actor portraying the princess’ studly consort James Hewitt doing his best Urban Cowboy riding-the-bull impression, much to the dirty-dancing delight of the smitten royal.

Finally, you think, Diana has fully embraced itself, director Christopher Ashley has rediscovered the campy aesthetic that served him so well from Jeffrey to The Rocky Horror Show and hope may not be entirely lost. But then the pink-bedecked romance novelist Barbara Cartland (don’t ask) stops the action to announce that she just made up that steamy bit, and the ripped stable boy covers up his abs and Diana sinks back to its high-decibel mediocrity.

By now you’ve probably read, heard or seen for yourself, via Netflix, just how deliciously bad Diana is, but the truth isn’t quite so much fun. Diana, opening tonight on Broadway at the Longacre Theatre, is not a so-bad-it’s-good disaster. It’s just a regular, run-of-the-mill mess, a well-intended celebration of a beloved figure undone by one bad turn after another. More’s the pity. 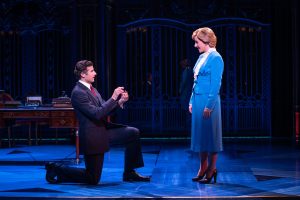 From its bombastic score, inane lyrics (yes, they really do sing “thrilla in Manila with Diana and Camilla,” and Diana really does coo to a pile of swaddling clothes “Harry, my ginger-haired son/You’ll always be second to none”) and, worst of all, the most grating, aggressively annoying singing and dancing ensemble to ever upstage a principal cast, Diana is a muddle, its few pleasures coming from Jeanna de Waal’s perfectly acceptable singing, a sly turn by the terrific Erin Davie as Camilla Parker Bowles, some cool dresses and the scattered unintentional humor that had the crowd response at the reviewed performance, complete with a well-timed “f*ck off” aimed at the arrogant Prince Charles, suggesting the musical might be primed for Rocky Horror-level audience engagement.

Written by Joe DiPietro (book and lyrics) and David Bryan (music and lyrics), the duo behind the Tony-winning Memphis musical, Diana presents the life of the doomed and beloved princess with all the necessary Wikipedia highlights. The familiar elements of the fairytale-gone-bad tale are present and accounted for: The unassuming and virginal 19-year-old Diana Spencer is chosen for wooing and eventual marriage by Prince Charles (Roe Hartrampf), who’s under pressure from mum Queen Elizabeth II (the great Judy Kaye) to settle down and bring some stability to Buckingham Palace.

Charles, in case you hadn’t heard, still loves Camilla, who, in Diana‘s best move, is depicted as the prince’s string-pulling co-conspirator in selecting Diana for future queendom, largely because the couple sees the newcomer as easily manipulable, perfect cover for their secret affair. Diana doesn’t take long to get wise and begin acting out, first to her own detriment (she lands in the hospital after smashing her fist through a glass cabinet) and then for her own fulfillment (her charitable work with AIDS patients opens her eyes to the world’s suffering).

Her newfound popularity with the press angers Charles, threatens Camilla and annoys the Queen, and after one too many showdowns with the prince Diana decides to bolt. After an impossibly congenial goodbye to the Queen, she wanders off into a flashbulb sunset, with TV announcers eventually telling us the sad news of that tunnel in Paris and the chorus shout-singing at us about her legacy.

With a rock-based score that seems more like imitation Jesus Christ Superstar-era Andrew Lloyd Webber than anything remotely resembling the ’80s New Wave pop favored by the real Diana – just imagine how a hint of Dire Straits, Duran Duran or even Billy Joel sound that could have served as an effective signifier of the time period – Diana arrives at peak volume and stays there for two and a half hours. 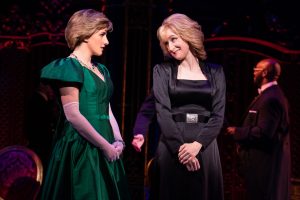 The principal cast is, by and large, better than the material – faint praise, but still – and does its best through groaners like the Valley of the Dolls catfight between Diana and Camilla (“The Main Event,” staged in boxing ring fashion), Queen Elizabeth belting out a ballad about her youthful days as a simple girl besotted with her soldier boy Philip, and a depiction of the most elaborate wedding in modern memory reduced to a showcase for a silly trick: a big pouf of a gown glides next to Charles – veil not-so-convincingly hiding the fact that no one’s inside – as Diana, in a slip, wanders about the stage in a nervous shambles. When the big reveal arrives, the actress positions herself just so and pops her head into place like she’s posing in one of those carnival cardboard cutouts.

If the wedding gown is an odd misfire in costume designer William Ivey Long’s faithful recreations of the real Diana’s iconic couture, other familiar dresses, suits and gowns seem on point, and many get their own rounds of applause. One even gets its own song: “The Dress” is an ode to the sexy black, off-the-shoulder evening gown designed in 1994 by Christina Stambolian, widely known as the “revenge dress” since she wore it after Charles publicly admitted to adultery. The ever blunt DiPietro and Bryan call it a “f*ckity, f*ckity, f*ckity f*ck you dress,” which is somewhat funny for the first dozen or so f*ckities.

In fairness, the dress is a dazzler, and it, like so many of Diana’s other gowns recreated here, steals the scene. All the odder, then, that Long could be so remarkably off base in the costume designs elsewhere on view, most notably in the repetitious scenes of swarming tabloid reporters dressed in dated Front Page regalia of fedoras and trench coats. Flapping coattails like vulture wings or vampire capes might make for a fitting allegory on the page, but on stage, and in Kelly Devine’s atypically histrionic choreography, the overwrought dancing becomes as bothersome as any paparazzo. And there’s an entire musical number -“Snap, Click” – devoted just to these angry-faced tabloid hacks.

The tabloid vultures will be back, of course, trying, like Diana, The Musical, so very, very hard to entertain us that you might, for fleeting moments, wish things would go better than we know they will, that Diana, The Musical would find the love it so desperately seeks. Maybe Rocky Horror really is the way to go. Bring rice?