Apple TV+’s comedy series Dickinson tonight wrapped up its third and final season, with Emily Dickinson (Hailee Steinfeld) and her loved ones looking to the future.

As the episode titled “This was a Poet -” opens, Emily is visited in her family’s garden by Death (Wiz Khalifa), who is donning a new suit and suggests that she herself is in need of “a new look”—a “uniform” befitting her work as a poet. From his perspective, she’s at a point where she should look to “go farther and deeper” in her writing than ever before—and she can only do so by separating herself from other peoples’ expectations, the strictures of which are embodied in the corset she’s long been forced to wear. 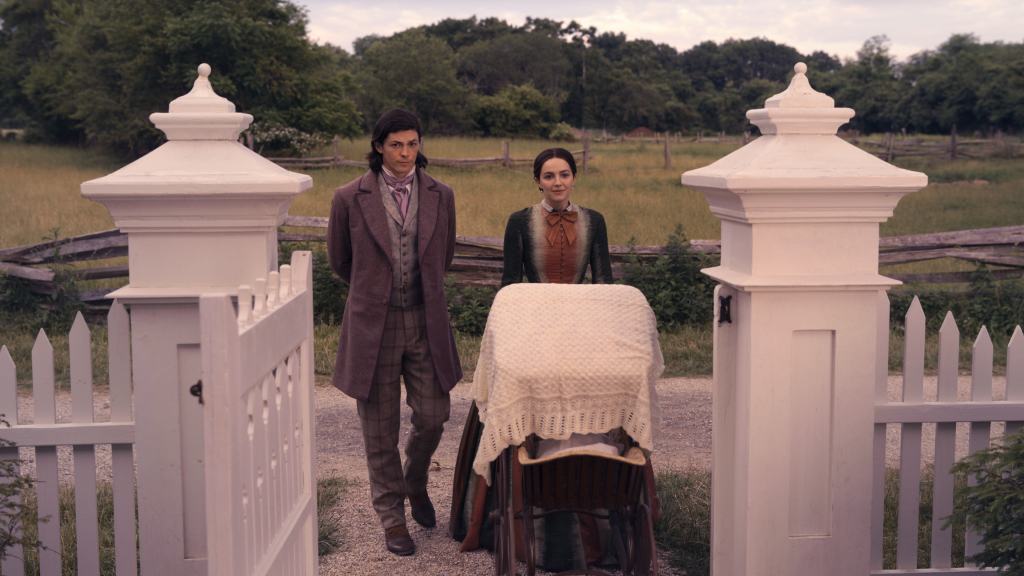 “Be who you are,” Death advises, “because time’s moving fast and you’ve got poems to write.”

As Emily contemplates a new means of dressing herself, her brother Austin (Adrien Blake Enscoe) and his wife Sue (Ella Hunt) stop by the Dickinson residence with their four-month-old, as-yet-unnamed baby in tow. Austin has come by to make peace with his father Edward (Toby Huss) and to ask for his aid in a legal case centered on Angeline Palmer, a young, freeborn Black woman that a local family has tried to sell into slavery. While Palmers’ brothers attempted to prevent this by smuggling her out of town, they were caught in the act and imprisoned, now finding themselves in need of representation.

Though Edward is reluctant to get caught up in this “messy business,” he’s convinced to “stand up for what’s right” as Emily is visited by local dressmaker Betty (Amanda Warren)—the wife of her family’s hired hand Henry (Chinaza Uche) who is away fighting in the Civil War. Emily asks for Betty’s guidance in creating the new dress for her to write and live in—a streamlined one with pockets and buttons all the way up the front that she’s not sure has ever existed before.

As Emily conveys her vision for the dress, another guest drops by her family’s residence—that being Colonel Thomas Wentworth Higginson (Gabriel Ebert). The author, abolitionist and soldier has come to greet “the genius” who he’s come to know only from afar, through her letters and poems. “Emily’s exquisite, necessary words have been a balm to me amid the anguish of war. Somehow, I’ve been out there on the front lines yet she’s the one who’s managed to capture the experience,” he tells Emily’s parents. “How is it possible that this woman so far from the battlefield seems to speak its deepest, darkest truths? I had to come and meet her for myself.”

While Sue intuits that Higginson will become an important figure in Dickinson’s literary career—someone who “could one day be responsible for Emily’s legacy”—Emily herself pays the man no mind, remaining upstairs and focusing, as always, on her work. But even if the Colonel doesn’t meet Emily on this particular occasion, his pilgrimage to her home wasn’t entirely in vain. First, he runs into Betty and is able to inform her that Henry is “very much alive,” giving her a set of letters he’d written to her. He then shares a poignant exchange with the Dickinsons’ maid Maggie (Darlene Hunt), who speaks to the importance of poets during times of tumult, such as the one America is currently in. “It used to be said in the old Irish wars that the clans had an agreement that no matter how bloody the war became, no matter how many were slaughtered, they should always spare the poets,” she says. “’Don’t kill the poets,’ they’d say. Because the poets had to be left to tell the story.”

Later, Austin and Sue announce that they’ve named their child Edward after the former’s father, with Austin also expressing his intent to remain in Amherst, where he’ll continue working to make the world a better place.

We then return to Emily’s room and watch the seasons pass, as she recites lines from her poem, “This was a Poet.” She subsequently heads to the ocean in her new, white dress, there greeting a group of mermaids laying out on the rock. After taking her socks and shoes off, she gets into a rowboat and heads out to sea, as the tune “Your Light” by London band The Big Moon plays.