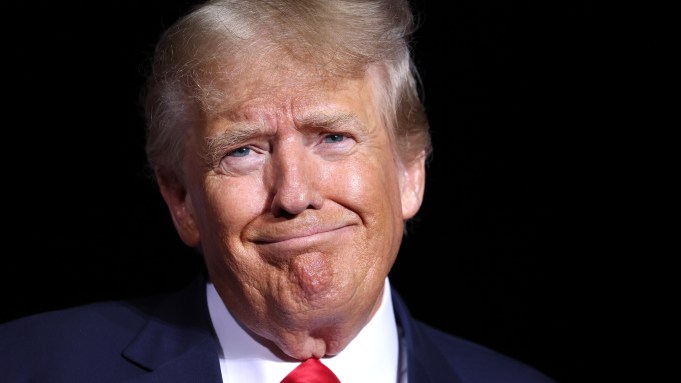 Donald Trump said that he is running for president in 2024, seeking to return to the White House amid warning signs that he’s losing support among key Republicans and perhaps even the right wing media machine.

“In order to make America great and glorious again, I am tonight announcing my candidacy for president of the United States,” Trump told a crowd gathered at Mar-a-Lago.

Trump’s announcement had long been anticipated, as he had teased it in interviews and at campaign rallies.

Donald Trump Gets The Spotlight For His 2024 Speech, But Networks Vary In Coverage And Cutaways

His hour-plus speech was heavy in attacks on President Joe Biden, including personal barbs about him being out of touch, as well as “radical left Democrats.”

While he tackled issues like immigration and crime, Trump also pledged to dismantle the “deep state” and “the swamp” of D.C., using rhetoric heard throughout his presidency. He made a reference to “cheating” in elections, but did not dwell on his claims that the 2020 presidential election was stolen. Neither did he directly reference the day’s big foreign policy news: two missiles hitting Polish soil.

“Our country can be greater than it ever was before, by a lot,” said Trump, who seemed more subdued than in past rally speeches, as he tried to stick to scripted remarks.

Biden’s team was ready, tweeting out a video with the message, “Donald Trump failed America.”

Fox News carried the speech until Trump began waxing nostalgic about, of all things, former german Chancellor Angela Merkel. “Remember Angela? No one talks about Angela anymore…” he said. CNN featured it until Trump made the official announcement that he was running; MSNBC’s Alex Wagner dipped in and out of the speech, instead offering analysis with contributors such as Peter Baker and Alex Wagner. Broadcast network streaming channels also leaned into analysis rather than carrying the speech in its entirety.

With Democrats doing surprisingly well in the midterms, retaining control of the Senate and likely keeping the GOP’s new House majority to the low single digits, a number of Republicans have said publicly that it was time to move on from Trump. Many of his endorsed candidates in the most competitive contests lost. They included Mehmet Oz, who was defeated in his bid for U.S. Senate in Pennsylvania, and Kari Lake, who lost to Democrat Katie Hobbs.

Meanwhile, a potential rival for the Republican nomination, Ron DeSantis, won reelection as governor of Florida by a lopsided margin. That has led to a push by media outlets on the right for the party to move on to DeSantis, who is much younger than Trump yet shares many of his brash tactics.

Trump has taken to labelling DeSantis as “Ron DeSanctimonious,” coming on the heels of a DeSantis campaign ad that suggested that he was chosen by God to run for office.

Trump also has skewered other potential rivals, including Virginia Governor Glenn Youngkin, with the possibility that many more Republicans also will enter the race. Another potential contender, Vice President Mike Pence, has embarked on a book tour this week, offering some sharp criticism of the former president. In an interview with ABC News, Pence said that Trump’s words during the January 6th attack on the Capitol were “reckless.” Pence also told Fox News that Republicans “have better choices” than Trump.

“If Ms. Lake couldn’t win on ‘Stop the Steal’ in 2022, it’s hard to see how anyone else can pull it off,” the Journal wrote, referring to Lake’s election denialism. “”Maybe at last the 2020 election is over.”

This will be his third presidential run as a Republican, having waged a brief campaign for the Reform Party nomination in the 2000 cycle.

If elected, Trump would be the first president to serve non consecutive terms since Grover Cleveland.

His presidential run also takes place amid multiple investigations, including Justice Department probes of his possession of classified documents after his presidency, and of his role in the January 6th attack on the Capitol. He’s already claimed that the probes are politically motivated, something he surely would raise if criminal charges are brought.

"I'm a victim. I will tell you. I'm a victim" — Trump pic.twitter.com/ietvHhTG2c