For filmmaker Denis Villeneuve (Arrival, Blade Runner 2049), the opportunity to bring renowned sci-fi novelist Frank Herbert’s 1965 literary-franchise-launching masterwork Dune to life on the big screen wasn’t just the realization of a long-held dream; it was a chance to tell a multitude of film genre stories folded into one.

“To me, Dune is a psychological thriller, an adventure, a war movie, a coming-of-age movie. It’s even a love story,” says Villeneuve. “There’s a reason the book stayed on my shelf, beside my bed, all those years.”

Indeed, Villeneuve became a fan of Herbert’s allegorical, wildly influential opus during a formative period while growing up in Quebec. “I discovered the book in my teenage years, and I remember being totally fascinated by its poetry, by what it was saying about nature—the true main character of Dune,” he recalls. “At the time, I was studying science, I thought I could become either a filmmaker or a biologist, so the way Frank Herbert approached ecology in the book for me was so fresh, so rich, so poetic, so powerful. His view of nature was absolutely mesmerizing—all those beautiful ecosystems he created.”

The filmmaker also appreciated the way Herbert employed both trenchant real-world commentary and a classical hero’s journey into the narrative. “His exploration of the impact and chaos caused by colonialism was a portrait of the 20th century that is still relevant today,” he says. “And through all of this was a young man struggling with his identity, trying to find his way in the world, as I was doing myself. The way Paul discovers his identity through another culture was, for me, amazing.”

Granted the freedom of telling the film’s epic-scale story over multiple films, Villeneuve teamed with screenwriters Jon Spaihts (Doctor Strange, Passengers) and Eric Roth (Forrest Gump, A Star Is Born), both of whom shared the director’s longtime passion for the source material.

“It was one of those books I knew particularly well as a teenager,” says Roth. “I thought the world-building was pretty incredible, and also the glossary—the language—that came from Herbert’s imagination. And a major element for me was the societal aspect and his view of environmental change. It has all the ingredients that come together to create a wonderful alchemy of storytelling: what happens to planet Arrakis, the father-son and mother-son storylines, the fact that women are very powerful. … It seems modern and all of a sudden very pressing, and he wrote it in the ’60s.”

“This was a chance of a lifetime for me,” agrees Spaihts. “I first read Dune at probably 12 or 13, and at that age I was struck by it almost like scripture; it felt like one of the most profound things that I had read and became one of my annual reads, like The Lord of the Rings and a couple other pivotal pieces of fiction. I came to know it shockingly well, and a striking experience for me, working on the screenplay, was that all I really needed to do was start a scene and my brain would just lay out the dialogue. I knew exactly where it went line by line.”

Check out the trio’s script below for the film, which stars Timothée Chalamet, Zendaya, Rebecca Ferguson, Oscar Isaac, Javier Bardem, Jason Momoa and Josh Brolin. Warner Bros released in the fall and has grossed $397 million at the global box office. 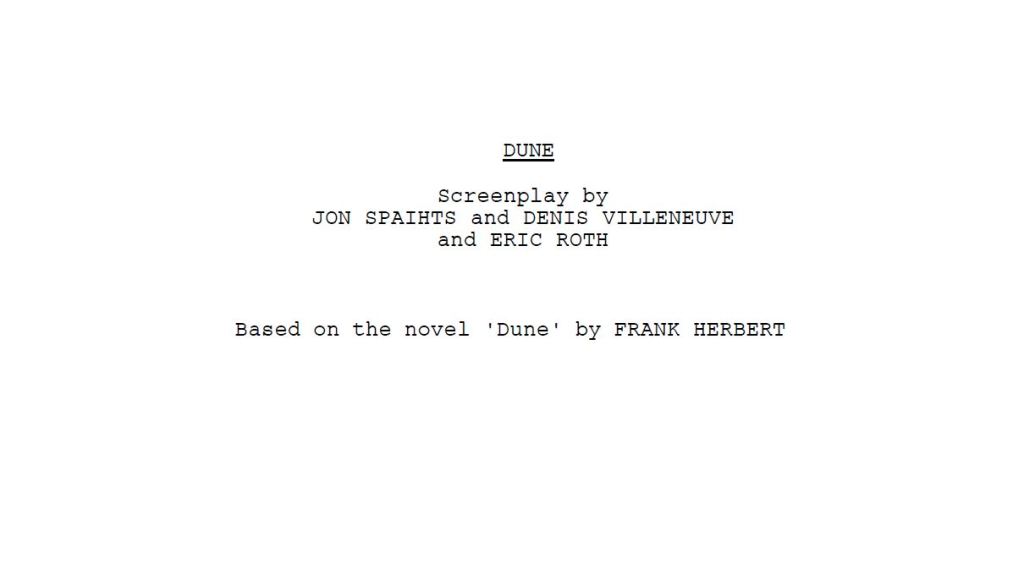