With voting set to open soon to determine the Oscar documentary shortlist, Flee continues to make a very strong case for recognition.

The Neon release from director Jonas Poher Rasmussen won the Gotham Award for Best Documentary Feature on Monday, burnishing an awards run that began with the top prize for international documentary at the Sundance Film Festival earlier this year.

The story, told mostly through animation, centers around Amin Nawabi (a pseudonym used to protect the identity of the real person), who grew up a gender non-conforming kid in Afghanistan. His father was seized as the Mujahideen took over Kabul after the Soviet exit in 1989. The rest of the family attempted to flee to the West, and Amin became separated from his mother and siblings, making it eventually to Denmark as a gay teenager, alone, speaking no Danish. 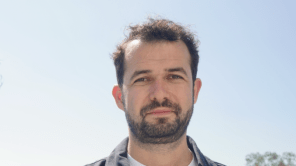 Accepting the Gotham Award, Rasmussen noted it was an eight-year process to make the film.

“But the journey we [as filmmakers] took is nothing compared to the journey Amin took,” Rasmussen said, “going from Afghanistan to Denmark. “So, this [is] really to thank him for his courage, for his generosity, and for trusting me to tell his story.”

The trust between subject and filmmaker owes much to the length, and strength, of their relationship. Rasmussen met Nawabi decades ago.

“I grew up in this very small rural town, a village basically, in Denmark, like 500 people in it. And one day, Amin showed up in town. I was 15. He was 16, and he stayed in foster care with a family, because he came all by himself,” Rasmussen recalls. “We started meeting up at the bus stop every morning, going to high school, and we became friends… I was always curious about why he arrived, but he didn’t want to talk about it. And I, of course, respected that.”

They remained friends into adulthood, as Amin became an academic and Jonas pursued a career in radio. 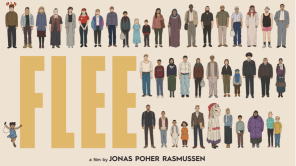 “I think 15 years ago I asked him if I could do a radio documentary about his story. And he said no,” Rasmussen tells Deadline. “But he said he knew he would have to at some point, and when he was ready, he would tell it to me.”

The breakthrough came with Rasmussen’s inspiration to recount Amin’s tale through animation.

“He finally said yes because with the animation we could make him anonymous,” Rasmussen says. “It’s traumatic experiences that are hard for him to talk about, so he really didn’t want to make a ‘normal’ film, where he would then meet people in the street who would know his innermost secrets and his traumas.”

Rasmussen recorded the interviews at his home, requesting his friend lay flat, close his eyes, and picture what he had been through. 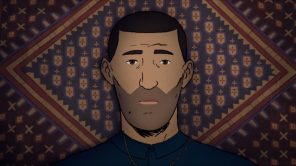 “I asked him to be really detailed about everything, to describe different locations, which would give us a lot of details. So when he was talking about being in his house, I would ask him, ‘What did the garden look like? What kind of plants were there? What are the colors of the wall?’ Like all these things,” Rasmussen says. “That would give us a lot of material for the animators to animate… He would see everything in front of his eyes and his memories would start to kind of come back. And he would relive it more so than just retell the story.”

Amin spoke of the family’s initial flight to Moscow, mistreatment at the hands of Russian police and prejudice they faced from ordinary Russians. They paid traffickers to try to get them to Sweden, where Amin’s older brother had found refuge, only to be returned to Moscow and arrested.

Animation allowed the filmmakers to visualize scenes never captured on film and events that Amin heard about but didn’t witness himself.

“For example, when his sisters are hiding in a container [on a ship] going to Sweden, he wasn’t there. So he wouldn’t actually know what it looked like inside the container, but he knew his own sense of fear,” Rasmussen explains. “With the animation, we could go more into showing the fear than trying to be realistic to what actually happened. These kinds of expressive sequences are something we couldn’t have done without animation.”

Rasmussen believes animation also allows the audience to experience the story at a more emotional level.

“I think because we’re exposed to so many stories all the time in the news about refugees, about bad things happening around, and you always see a human face who’s struggling and I think, for me at least, I have to block things out because it’s too much. I can’t cope with taking everything in,” Rasmussen says. “But because of the animation, I think you’re more open, because it’s not a human face you’re reacting to.” 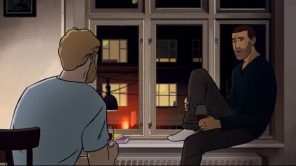 In the interviews, Amin told his friend of growing up gay in Afghanistan where homosexuality brought shame on a family. Amin recalled that after he was resettled in Denmark, he told adults he wanted to take a pill to “cure” himself of being gay. Part of his journey has been one of self-acceptance. The film explores Amin’s relationship with Kasper, a Danish man who would become his husband.

Rasmussen says reaction to the film has been “overwhelming positive. It’s been really amazing to see how people can relate to the story, even if they’re not refugees or gay… And I know it really means a lot to Amin, because he’s kept it a secret for so many years. I think he was a little scared that people would be just kind of like, ‘Huh,’ and then walk on.”

Sharing his experience at last has benefitted his friend, Rasmussen says.

“In the very first interview I did with him, he told me it was therapeutic,” Rasmussen notes. “To him, to just kind of get it out there is therapeutic.”

Flee opens in theaters in New York and Los Angeles on Friday, with an expansion to more theaters planned for January. Actors Riz Ahmed and Nikolaj Coster-Waldau are among the executive producers of the film and have voiced an English-language version of Flee, which will be released at a later date. Ahmed plays Amin and Coster-Waldau plays Rasmussen, asking questions of his friend.

“Right away, we thought about Riz, because he’s just been in so many good things. Representation is so close to his heart. So we really tried to get a hold of him in the beginning,” Rasmussen tells Deadline. “Nikolaj was a bit easier. He lives 10 miles from my place in Copenhagen… He saw the film and really liked it as well, and wanted to be part of it.”