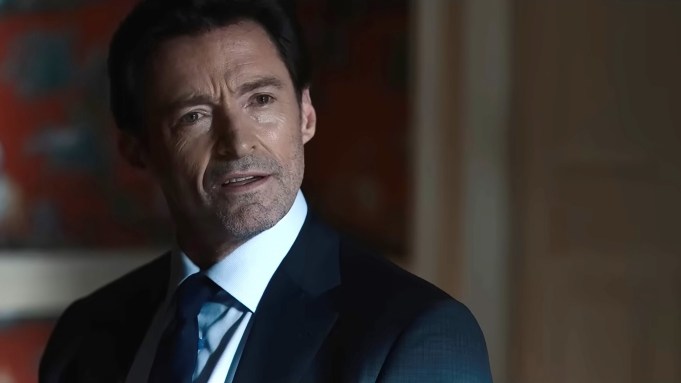 Sony Pictures Classics present Florian Zeller’s The Son on 554 screens, an emotional family drama that folllows the director’s 2020 Oscar-winning The Father. As with that film, The Son is adapted from Zeller’s own stage play along with Christopher Hampton. Hugh Jackman, Laura Dern, Vanessa Kirby, Zen McGrath and Anthony Hopkins star in the cautionary tale of a family struggling to reunite,

Jackman is Peter, whose hectic life with new baby and new partner Beth (Kirby) is upended when ex-wife Kate (Dern) appears to discuss their troubled teenage son Nicholas (McGrath). Peter strives to care for Nicholas and be the father he would have liked but discovers that by reaching for the past to correct mistakes, he loses sight of how to hold onto Nicholas in the present. The Son received a ten-minute standing ovation at the Venice Film Festival where it premiered. Deadline review here.

The latest crop of specialty films hits theaters as the Sundance Film Festival gets underway. The bastion of indie film and filmmakers is back in person for the first time since 2020 with a broad lineup of new and established directors amid a tougher landscape for indepdendents. At the opening press conference yesterday, Sundance Institute CEO Joana Vicente acknowledged the challenges.

“I think it’s so important that we come together, that the industry comes together. We know there’s been a lot of consolidation in the industry. We know that theatrical exhibition is difficult for specialty films,” she said. There are more questions than solutions. But festivals play a key part in creating dialog and highlighting indie films.

“How to do we figure it out together? How do we continue to have people be curious about these kinds of films, that can really shake you, that take risks, that [present] a original vision, that offer different perspectives, and challenge the status quo? How do we develop the audience? How do we call attention? And that is part of the role of the festival. So in a way, it’s more important than ever.”

The U.K.’s Vertigo presents its first ever theatrical release Stateside, BAFTA winning After Love, on 20 screens with potential to expand. This is the debut feature by Aleem Khan, who will be hosting Q&As in NYC. The story of a widow who discovers her husband’s secret family after his unexpected death stars Joanna Scanlan, who took BAFTA Best Actress honors last year. Also stars Nathalie Richard and Tali Ariss.

Scanlan plays Mary, a white English woman who converted to islam when she married her Pakistani husband, Ahmed, and they settled in Dover, England. Following Ahmed’s unexpected death, Mary discovers that her late husband had a secret life just twenty-one miles away across the Channel in Calais, France. The shocking discovery compels her to go there to find out more, and as she grapples with her shattered sense of identity, her search for understanding has surprising consequences.

A24 presents When You Finish Saving The World written and directed by Jesse Eisenberg and starring Julianne Moore and Finn Wolfhard as mother and son, Evelyn and Ziggy seeking out replacements — with Evelyn desperately trying to parent an unassuming teenager at her shelter, while Ziggy fumbles through his pursuit of a brilliant young woman at school –- to find they have more in common than they thought. Eisenberg’s first feature as writer-director premiered at Sundance last year. See Deadline review.