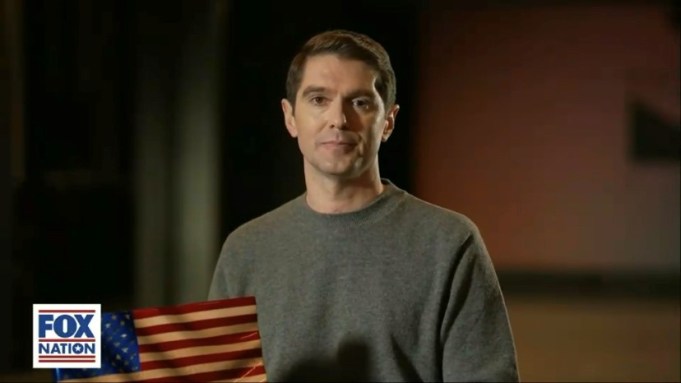 Fox News correspondent Benjamin Hall, who was severely injured in an attack while he was reporting in Ukraine in March, gave an update on his recovery in a video message to Fox Nation’s Patriot Awards.

Hall was the recipient of the ceremony’s Courage Award.

Cameraman Pierre Zakrzewski  and Oleksandra “Sasha” Kuvshynova, who was working as a freelance consultant for the network, were killed when their vehicle was struck by incoming fire near Kyiv. Hall was with them as they reported on the Russian invasion.

Zakrzewski and Kuvshynova were included in a tribute on Thursday night at the Committee to Protect Journalists’ International Press Freedom Awards. Fox News’ Bill Hemmer read the names of journalists who died in the past year.

At the Patriot Awards, Harris Faulkner and Johnny Joey Jones. a Fox News Media contributor, presented the award to Hall. When he was deployed to Afghanistan, Jones in 2010 lost both of his legs above the knee and severe damage to his forearm and both wrists.

Hall lost half a leg and his foot on his other leg. He also lost use of one eye and ear, and of his left hand, in addition to burns across his body.

“When this first happened, I wrote Ben an email I’ve tried to give whatever advice I have as a fellow amputee from war that I felt like was basic and could be followed,” Jones said. “I said, ‘Have relentless patience, get familiar with your friend pain and when you’re looking for inspiration, don’t look any further than your family, and then look in the mirror.”

He added, “When we talk about the courage award, it’s not just the bravery of running on the battlefield to do his job. It’s the courage of working through the unknown and recovery is unknown. So without any other words that I can offer, know that Benjamin Hall is courageous because every day since that day he has battled the unknown and proven his own doubts wrong and I wont share the words he wrote back to me because they are his to give but I can tell you this. That man is in love with his family and his life and he is thriving.”