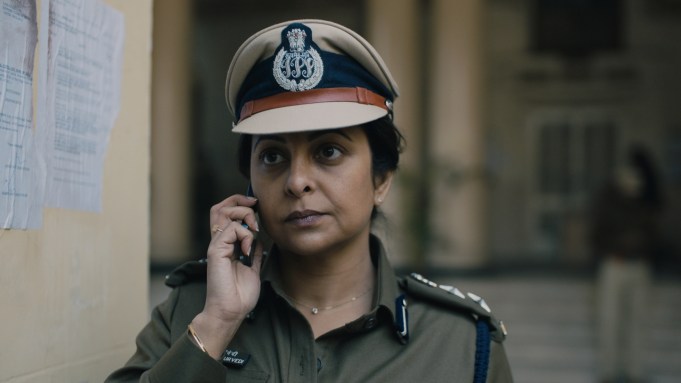 Meet any high-profile Indian director or producer these days, and the talk is all about bibles, writers rooms and showrunners, rather than making films. Driving down Mumbai’s main artery, the Western Express Highway, most of the billboards are promoting new premium drama series from Prime Video, Netflix and Disney+ Hotstar, rather than the latest Bollywood release.

Of course, the shift of talent from film to episodic is happening everywhere in the world, but in the fast-paced, opportunistic environment of the Hindi-language content industry, these trends have become supercharged. Netflix and Amazon moved in here around 2016, local broadcasters fought back with their own streaming services—Hotstar (now Disney+ Hotstar), SonyLiv, Viacom18’s Voot and ZEE5—and the demand for premium drama series started to skyrocket, as competitors tried to differentiate themselves in an overcrowded field.

Most of the big international TV producers and distributors have a presence in India, producing Hindi versions of unscripted formats including The Voice India, India’s Got Talent and Bigg Boss, but when the streamers started raining budget on scripted series, they quickly moved into that space.

So far, a large proportion of these shows have been Hindi-language remakes of U.S., UK and other international properties.

Banijay Asia, a joint venture between Banijay and Indian TV veteran Deepak Dhar, recently worked with Sameer Nair’s Applause Entertainment on the Bollywood version of Call My Agent! for Netflix, and is currently producing Hindi-language remakes of both The Night Manager and The Good Wife for Disney+ Hotstar.

BBC Studios India is also active in this space, working with Applause on Hindi versions of Criminal Justice, Luther (Rudra: The Edge of Darkness) and Guilt (Bloody Brothers). Separately from Applause, it has produced local remakes of Doctor Foster (Out of Love) for Hotstar and Press (The Broken News) for ZEE5.

The proliferation of remakes is not surprising, as both the streamers and producers are currently focused on speed and volume. “There’s so much demand for premium content, and everybody wants it fast, so formats become an easy turnaround for the streamers,” explains Sameer Gogate, head of BBC Studios India’s production business.

In most cases, this means the potential for international distribution of these shows is limited, due to holdbacks in markets where the original English-language or other language versions are still on air.

“The U.S. is always a big challenge, although you want your Hindi content in that market, because there’s a massive Indian diaspora sampling those shows,” says Dhar.

But even Indian shows based on original material are unlikely to be syndicated in the international market, because their buyers—whether they’re global or Indian steamers—all have a global footprint and scoop up worldwide rights. This means that very few independent production companies have built a business in this space as IP-owning producers, as opposed to producers-for-hire or basic content vendors.

Applause, backed by Aditya Birla Group, is the big exception as it has enough capital to finance its own shows and then shop them to the streamers. It made a splash with Scam 1992: The Harshad Mehta Story, which it financed then sold to SonyLiv, and has continued with this model. It’s understood that SK Global, producers of the Emmy-winning show Delhi Crime, financed the show before selling global rights to Netflix. But while these companies may be retaining some IP or equity, they’re still not involved in exploiting international rights.

For the market to mature, and export more shows that work internationally, the next step would be for producers to package and produce shows based on original material that they could then exploit themselves, in markets outside of India. Applause is probably the closest to achieving this, but others are trying: SK Global, Lionsgate’s Indian outpost; LA and Mumbai-based Locomotive Global, which is partnered with Applause on Gurinder Chadha’s Seeker; Contiloe Pictures, also working with Applause on historical epic Taj: A Monument of Blood; and Ronnie Screwvala’s RSVP.

“There’s room to do this, so long as you can figure out the financing in India,” says Locomotive Global co-founder Sunder Aaron of the opportunity in the space. “But the banking sector is very conservative and we don’t have deficit finance.”

The big formats companies are also starting to develop shows based on original material. Banijay Asia has Donkey Route, a drama series about Indians attempting to migrate to the U.S. on foot, along with two unannounced shows based on historical incidents. Says Dhar: “We’re building out a bunch of shows we feel could really travel outside of India, because while we’re blessed with the Banijay catalogue, with the growth of streaming, we think it’s time to start developing Hindi IP.”

Fremantle and BBC Studios India say they also have shows based on original material in the pipeline, while Endemol Shine India recently wrapped a series based on the book Trial by Fire: The Tragic Tale of the Uphaar Fire Tragedy, co-produced by former Hotstar executive Sidharth Jain, who is now active in the book adaptation space.

But even these producers acknowledge there are many obstacles to overcome. India’s film and TV industries have always worked on fast turnarounds, so don’t have much of a development culture, and while a showrunner and writers room culture is developing, it’s still early days.

There are also issues on the buyer’s side. Creative executives at the streamers usually come from a Bollywood or traditional television background, so tend to be risk-averse. But more importantly, the Indian media market is consolidating through a series of mergers, so the number of streamers is contracting, while at the same time international parent companies are scaling back costs. HBO Max is understood to be delaying its launch in the market and Disney+ Hotstar is moving towards ‘TV Plus’ rather than premium content, in an attempt to retain the mass audience after losing IPL cricket rights.

“There’s still high demand for premium content, as the audience has tasted blood, but some level of consolidation and price rationalization is likely to happen,” says Gogate. Indie producers and talent agents say there are only four buyers to pitch big-budget shows to: Netflix, Amazon, Disney+ Hotstar and SonyLiv.

Another issue is achieving scale when developing one’s own slate. Says one veteran producer, “If you develop three or four shows, there is a high probability a few may not get sold, and the cost will not be balanced out by profits from all of the others. Even if you sell them all, the markup is only around 10%, and that’s what you get without the risk of funding them. The IP might come back to you in 10 to 15 years, but is that really worth the risk?”

All of this will sound familiar to producers in many markets in the world. But those same issues that increase risk, could also open up the market to outsiders to come in and co-finance. “We may see some of the big streamers back away from doing a global deal,” says Datta Dave, co-founder of talent management company Tulsea. “They’ll be OK with paying 50% of the budget and letting you keep some of the rights to sell around the world.”

Sameer Nair is already in pursuit of this strategy: “We want to do more adventurous and ambitious projects, and partner with more global co-producers, companies out of LA, London and Israel who are active in co-productions.”

If this international participation ends up happening at all, it could be some time in the future. With China now out of the picture, India is looking like the next potentially huge media market, and has frontiers that have yet to be explored. Gogate points out that, while the premium series space is booming in Mumbai, it’s only just starting to take off in the four content industries (Tamil, Telugu, Kannada and Malayalam) in the south. There’s also growth in original Indian content, rather than remakes, across docu-series and unscripted shows.

Dhar points to the development of the Korean TV market as something that could eventually happen in India: “They’ve matured over 10 to 15 years of making premium dramas, while our market is just four to five years old. We have to give it time, but there are already a bunch of ambitious producers who are starting to think about how Indian content can evolve.”

As a result of India’s streaming boom, local audiences have become much more language agnostic. Not only are they sampling content in Indian languages other than the one they grew up speaking, they’re also more receptive to non-Indian language shows.

Stanley Fernandes, BBC Studios’ VP of distribution, South Asia, explains that while the market share of English-language content is still small, compared to Indian-language content, the growth of streaming has made it more accessible.

“We’ve seen a transfer of that English audience that used to sit on linear across to the digital space, and in the past couple of years there’s been growth for us amongst the digital platforms,” he says. “Whereas linear had to be generic viewing, because most households only have one television set, we’re now up on Netflix, Hotstar or Discovery+, catering to individuals rather than the whole family.”

Earlier this year, BBC Studios sealed a content deal with AVOD service MX Player, which with 300 million users is considered mass market rather than a premium service. In August, Fernandes signed a TVOD deal with BookMyShow, for series including Sherwood, Ragdoll and Unforgotten, which will be available as part of a BBC branded space.

Meanwhile, Ganesh Rajaram, General Manager/EVP, Asia, at Fremantle International is seeing more acceptance of non-Indian content in languages other than English, selling Spanish-language thriller Senorita 89 to Lionsgate and Italian-language drama My Brilliant Friend to Viacom18. “Of course, English content is still the most accepted [amongst ‘foreign’ or non-Indian content], but with streaming we’ve seen audiences more focused on the storytelling, the acting and production values, rather than the language,” Rajaram says.

Additionally, unscripted formats are now being produced across multiple Indian languages. “We were probably the first to realise the potential when Viacom18 didn’t pick up the Tamil rights for Big Brother, then [Tamil star] Kamal Haasan came on board and it became such a big hit for Star Vijay,” says Rashmi Bajpai, Executive Vice President, Asia at Banijay Rights.