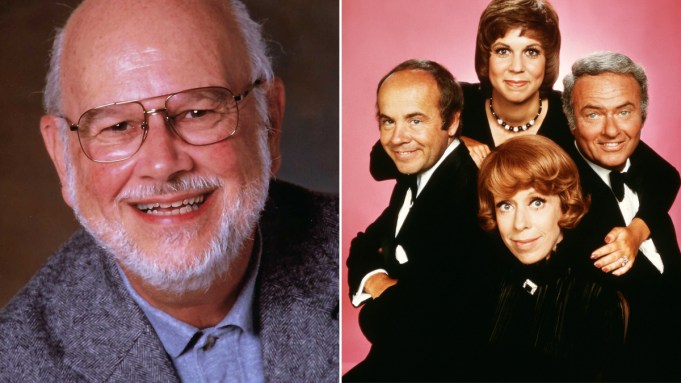 Gene Perret, who began a decades-long comedy writing career contributing jokes to stand-ups Slappy White and Phyllis Diller before joining the Emmy-winning writing staff of The Carol Burnett Show, launching a 28-year tenure with Bob Hope and serving as a producer on Three’s Company and Welcome Back, Kotter, died Nov. 15 of liver failure at his home in Westlake Village, CA. He was 85.

According to family, Perret began writing comedy as a hobby while working as an electrical engineer for General Electric in Philadelphia during the mid-1950s. After contributing some one-liners to local comic White, he was introduced by a friend to Diller, who hired him for her 1968 sitcom The Beautiful Phyllis Diller Show and encouraged Perret to pursue comedy writing full time. In 1969 he moved his family to California and within a year was writing for variety show The Jim Nabors Hour.

In 1971 and ’72, Perret wrote for Rowan & Martin’s Laugh-In before contributing to episodes of The New Bill Cosby Show, The Helen Reddy Show, Love, American Style, All in the Family and What’s Happening.

After Burnett, he wrote and produced multiple episodes for hit sitcoms Welcome Back, Kotter and Three’s Company, and in 1980 reunited with Burnett’s Tim Conway on the short-lived The Tim Conway Show.

Perret’s longest-lasting professional collaboration was with Hope, serving on the comedian’s writing staff for 28 years and working on dozens of Hope’s TV specials beginning with 1984’s Bob Hope’s USO Christmas in Beirut.

In addition to his television work, Perret wrote numerous magazine articles and more than 40 books, including Comedy Writing Step by Step and The Comedy Writing Workbook.

Perret is survived by his wife of 64 years, Joanne, four children, six grandchildren, seven great-grandchildren and several nieces and nephews.