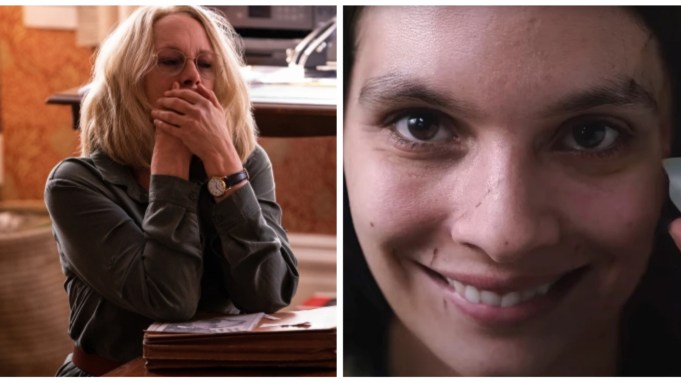 Refresh for latest…: Horror ruled at the global and international box office again this session with Universal/Blumhouse’s Halloween Ends bowing to $17.2M in 77 overseas markets for a $58.4M worldwide launch. Last week’s champ, Paramount’s Smile, put in another scary strong performance, dropping just 16% with $16.3M in 61 markets, to beam at a running offshore total of $66.4M and $137.6M global. The latter had crossed $100M worldwide on Tuesday.

Halloween Ends went day-and-date on Peacock domestically, where Anthony notes that left money on the table. Overseas, it’s a different story. In like-for-like markets, the debut is 46% ahead of last year’s Halloween Kills. Whenever a movie is simultaneously released to a streaming platform, piracy will ultimately be a factor offshore, but we are hearing the weekend’s result on the subset trilogy finale is better than expected. It also kicked off 20% bigger than Smile did in like-for-likes, though the latter is seeing incredible legs and ranked ahead of Halloween Ends in 22 markets this session. Horror fans are likely to see both films, but it’s unlikely the astonishing holds on Smile will be matched. (Breakdowns to follow below.)

While we wait for Warner Bros/DC’s Black Adam next weekend – the first tentpole after a long dry spell – other notable performances this session include Universal/Working Title’s Ticket to Paradise which added $7.8M in 76 offshore markets for a slight 28% dip. The overseas cume is $72.5M, above The Lost City, House of Gucci, Last Christmas, Yesterday and Crazy Rich Asians at the same point in release. The Julia Roberts/George Clooney romcom will serve as counter programming when it opens domestically next session.

Also reaching a benchmark during the week, Neon and Universal Pictures International’s Moonage Daydream topped $10M globally to become the biggest studio documentary of the pandemic with $10.7M so far.

In local-language titles, China’s Home Coming added about $12M this session to cume RMB 1.31B ($183M) after three frames. The National Day entries have been lackluster compared to previous years. Today marked the start of the National Party Congress.

Meanwhile, India’s historical epic Ponniyin Selvan: Part I has now reached an estimated $56M globally (including $36.5M locally) to claim the second biggest gross for a Kollywood film at home,  internationally and worldwide, according to local reports.

Also in India, action/adventure pic Kantara is seeing a surge. The film from and starring Rishab Shetty has seen increases throughout its three frames thanks to word of mouth and other local-language versions being released this weekend. It is expected to soon cross 100 crore ($12.2M) at home.