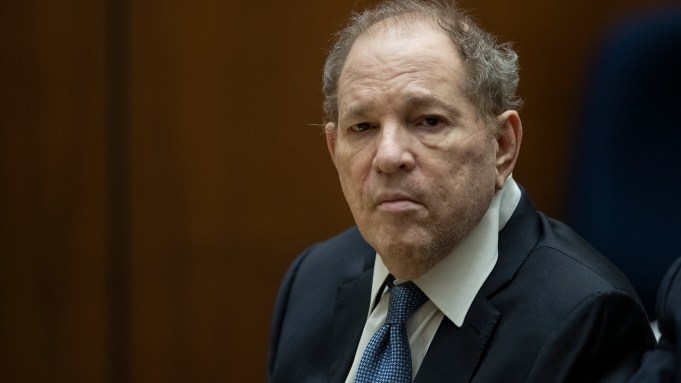 A model-actress who has accused Harvey Weinstein of sexual assault finished her testimony on Wednesday, as she faced a contentious cross-examination from a defense attorney who tried to raise doubts about her version of events.

The accuser, identified as Jane Doe #1, told attorney Alan Jackson that after the alleged assault occurred in February, 2013, she was “trying to act like nothing happened,” having previously told jurors of the trauma she experienced.

Jackson had questioned her on why she posted an Instagram photo shortly after the alleged assault, in which she is shown smiling with Al Pacino at a Los Angeles Italia Film Festival event. The caption included a few smile emojis.

Jane Doe #1 said that she could not recall whether the photo was posted by her or by her PR team.

She claims that, after a festival event, Weinstein tracked down her room and, when she let him in, he sexually assaulted her on the hotel room bed and in the bathroom.

Jackson also showed her another social media photo, a selfie taken in the hotel bathroom.

“This is a post that you put up 11 days after you claim the incident occurred in that very spot,” Jackson said.

But Jane Doe #1 insisted that, after the alleged assault, she had to keep up appearances for career purposes.

Jackson also questioned her about a fire alarm that he said went off at the hotel on Feb. 18, 2013, “basically the same time Mr. Weinstein was in your room … raping you, you think you would remember that fire alarm?”

But she said that she did not recall an alarm, and pushed back on the idea that the alarm went off in the time frame of the alleged rape. Jackson did not present a record that it went off.

She also told jurors that, once back in Rome, that she took two medical exams after the assault, as she wanted to make sure that she was clear of STDs.

On redirect examination, prosecutor Paul Thompson asked her why she didn’t change hotel rooms after the assault, given that she stayed there for several more weeks.

“I was trying to deny to myself that this happened to me…I thought it was my way out of there to act like nothing happened,” she said.

He also asked her to describe Weinstein’s private parts, as prosecutors have said that accusers would share common descriptions of his genital areas, which included scarring due to a surgery.

Weinstein and his attorneys have denied the sexual assault claims, contending that the incidents were consensual or fabricated.

Weinstein has pleaded not guilty on eleven sexual assault charges brought by Los Angeles prosecutors that involve claims of five women between 2004 and 2013.

Weinstein was convicted in 2020 on New York charges of rape and criminal sexual acts, and he was sentenced to 23 years in prison. He was granted an appeal by New York’s highest court in August, raising the chance that his conviction in that state will be overturned.

Jane Doe #1 filed a complaint with Los Angeles police in October, 2017, after Weinstein had been the subject of explosive stories in The New York Times and The New Yorker.

The account of the court proceedings was provided via a pool report.