It’s not easy to reboot a movie franchise, especially one which is close to 20 years old and based on a video game series that’s 25 years old.

But when it came to tackling a new iteration of Constantin/Screen Gems’ Resident Evil after longtime collaborators filmmaker Paul W.S. Anderson and star Milla Jovovich hung up their guns, British genre filmmaker Johannes Roberts saw the opportunity to take the zombie shooter series back to its roots — an angle that has fans of the game quite stoked. The pic opens wide November 24.

You can listen to our intriguing conversation with Roberts here:

While the previous Resident Evil movies through six installments developed a following of their own apart from the fans of the Capcom video game, the films were known for their flashy sci-fi style. Roberts brought the action back to Raccoon City, the dark and stormy night Midwest stomping ground of bioengineering corp Umbrella Company, which is responsible for the T-Virus outbreak that infects the town’s citizens (with coincidentally red raccoon eyes, among other severe symptoms). 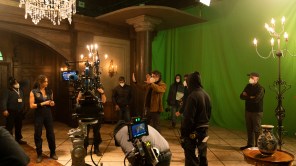 Two grown-up orphan siblings, Claire (Kaya Scodelario) and Chris (Robbie Amell) Redfield — one a rebel delinquent, the other a cop and both well acquainted with the town — find themselves leading the charge to tame the zombie apocalypse. There’s a bunch of other familiar faces from the video game including Jill Valentine, another member of Raccoon City’s police force (Ant-Man and the Wasp‘s Hannah John-Kamen) and the bad guy behind it all, who Claire can’t shake bad memories of, Umbrella virologist William Birkin (Neal McDonough).

Roberts talks about landing the Resident Evil job with Constantin, Scodelario’s Sigourney Weaver stamina, and the possibility of a Raccoon City sequel. 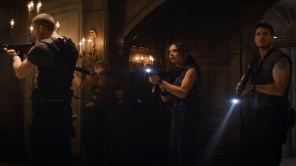 We also speak with Roberts about how Entertainment Studios’ Byron Allen saved his shark movie 47 Meters Down starring Mandy Moore, Matthew Modine and Claire Holt and turned it into a cult summer big-screen draw, saving the pic from the depths of a direct-to-DVD future — an anomaly in the current streaming era.

We  also delve into what did and didn’t work on Disney+ Day and the muted performance of Marvel’s Eternals at the box office.