“Things were happening fast and, on the fly, and, you know, when you are walking into a world that is very much established and you’re trying to establish yourself, it can be tricky,” says Hailee Steinfeld of making her Marvel live action debut with Disney+’s upcoming Hawkeye series. 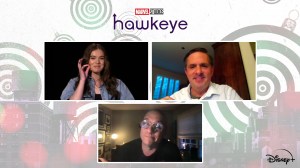 “But I had some incredible support from Jeremy, and the filmmakers, and the writers and everyone and anyone involved,” the Oscar nominee and Dickinson star adds on today’s Hero Nation podcast of her co-star Hawkeye himself Jeremy Renner, EP Rhys Thomas and directing duo Bert and Bertie and more from the show.

Take a listen to our chat with Hailee on this week’s podcast here:

Set in a post Avengers: Endgame world, the six-episode Hawkeye the TV series will launch with two episodes on November 24 on the House of Mouse streamer.

First introduced in the Young Avengers comics in 2005, the Bishop character teamed up directly with Barton in in Matt Fraction and David Aja’s acclaimed Hawkeye printed series in 2012 before taking over the mantle of Hawkeye herself. Along with the Disney+ series debuting next week, a Hawkeye: Kate Bishop tie-in comic series will hit the shelves this month too.

As the MCU expands on the small screen at a rapid click, Hawkeye, which co-stars Vera Farmiga, Fra Fee, Tony Dalton, Zahn McClarnon, Brian d’Arcy James and newcomer Alaqua Cox as Maya Lopez, was a big part of the second annual Disney+ Day on November 12. Drawing from the great car chases of Bullitt and The French Connection, with a sprinkle of The Blues Brothers, there was a hefty clip from Hawkeye last week as one of the many sparkling Marvel jewels in the Disney crown.

In that vein, we talk more about Disney+ Day and what it revealed of the way new-ish CEO Bob Chapek intends to run the sprawling media empire. Additionally, coming off the no surprise success of the Dwayne Johnson, Gal Gadot, and Ryan Reynolds top lined Red Notice, we look at the new Top 10 lists that Netflix is pumping out and what transparency really means in a Steaming Era.

And, like Hawkeye past and future, we aim for a bullseye.