Academy Award-winning actor Javier Bardem experienced a reawakening while becoming intimately acquainted with Desi Arnaz, the I Love Lucy star who Bardem brings to life in Amazon’s Being the Ricardos. And it all happened while the past and present collided during multiple musical numbers including “Babalu” and “Cuban Pete,” and while listening to private audio recordings shared by Lucy and Desi’s daughter, Lucie Arnaz. 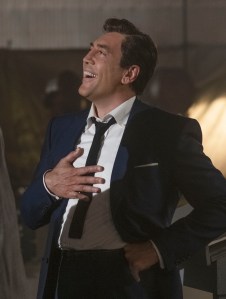 Before working on the Aaron Sorkin film alongside Nicole Kidman in the role of Lucille Ball, Bardem did not consider himself a singer. But the experience helped him not only grow closer to the famous Cuban actor, musician, and TV producer but also — and most important — himself.

“I was working The Little Mermaid when I got the role [of Desi], so I was already in the process of [working on my singing],” Bardem told Deadline while promoting the film’s Tuesday debut on Prime Video. “The first person to ever trust me with a song was [The Little Mermaid director] Rob Marshall. So when Aaron asked me if I could sing I said, ‘Of course, I can sing and play the guitar. I can do all those things.’ But then when I hung up I said, ‘Shit, how will I do all this?’ I wasn’t sure I could do it.”

To become Desi, Bardem worked with a squad that included vocal coach Fiona McDougal, whom he credits with helping him to find the confidence to achieve his goals in a short period of time — while he also was shooting The Little Mermaid.

“Little by little I built up my confidence,” he shared of his work with McDougal. “And once I found it with her, I loved it. I never had the experience of expressing myself through singing. Exposition is brutal. You feel very vulnerable while singing especially if you’re not a singer. You think you look and sound ridiculous. You feel like what you’re doing isn’t worthy. These were brand new feelings for me but once I found the confidence, and more or less the style, and worked on the skills to do it properly, I loved it. I’m very proud of that, especially because of the short amount of time we had to accomplish that.”

And for their efforts, Being the Ricardos was shortlisted for an Oscar for Best Original Score on Tuesday. His journey was documented in the featurette titled Becoming Desi to coincide with today’s streaming release of the film. 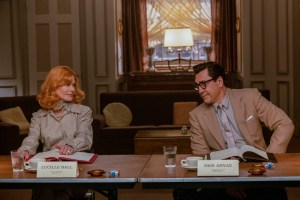 “In a recent interview I did with Nicole, she mentioned how before every take I was dancing or walking around and singing out loud,” Bardem said. “This was before every scene, even if it didn’t require me to sing or dance. Having both of these elements working through my body helped me connect to his physicality, his internal rhythm, and how this all was part of his daily life, and how he expressed himself. It helped me tremendously to have access to these skills that I didn’t use before.”

He continued: “I learned so much while playing Desi: playing guitar and congas; learning all those beautiful, long, and complex Sorkin dialogs in English with the help of my English coach, Thom Jones, and my Cuban coach, Daniel Duque Estrada — in less than a month. That’s a lot while shooting the movie simultaneously with another. I learned about the anxiety that comes from fear and insecurity while trying to keep it all under control. I had to stick to this philosophy I use of tackling each challenge line by line, which I had to remind myself of often. One thing will take me to another thing and so on. In the end, if I’m lucky and I focus, I will get to the end. In all honesty, me, Javier, I was so anxious trying to keep everything under control, which was often hard to do.”

And that’s without factoring in the added pressure of knowing the expectations of countless I Love Lucy fans all over the world.

“Absolutely,” he said of the added stress he felt. “But at the same time, knowing a bit of Nicole’s process, we agreed that there wasn’t too much time for us to spend thinking, doubting, and being insecure. From the moment they cast me to the moment we began shooting, was not a long time to my surprise because of Covid and shooting was taking place in LA. I didn’t think they’d be able to put it all together so fast but they did. With such a quick turnaround [and all my existing responsibilities], there was no time for doubt. I was all in and that meant a 24/7 focus on this — I was sleeping five or six hours at most. Of course, I was aware of who this iconic couple was, but I didn’t focus on that. It was too much. Focusing on that would’ve been a heavy weight on my shoulders that would’ve sunk me into an ocean of fear, doubt, and insecurity. Instead, I leaned into what I needed the most: faith and a strong will.”

Both Bardem and Kidman’s castings were criticized for a variety of reasons. For Bardem as a Spaniard, his being cast as Desi, a Cuban, was met with resistance. It should be clear, however, that Cubans, unlike most other Latin American countries, have strong connections to Spain and wear the genetic connection as a badge of honor. Both Ricky and Desi were proud of their Spanish heritage, as well.

Bardem previously portrayed a Cuban in Julian Schnabel’s Before Night Falls in 2000, which earned him his first Oscar nomination. 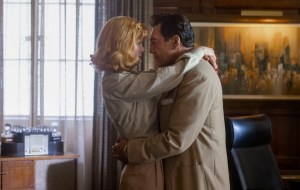 “I worked really hard immersing myself into Desi’s life and who he was and a big part of that was his Cuban heritage,” he said. “With that being said, the representation of minorities in movies, including Latin Americans, of course, it’s important and has to be there. I absolutely support that and understand that. While I was chasing the role, I wasn’t trying to persuade anyone not to hire another actor, especially any that were of Cuban descent that auditioned. Never. When I got the role, I committed to working as hard as I could and as hard as I did, to earn it. To make sure that it’s done with all the respect, admiration, respect, and love for Desi and what he represented, including his origins.”

Part of his research into Cuban culture was listening to the recordings of comic Alvarez Guedes, whose bit about the versatility of the word ño — a shortened version of the slang word coño — is as legendary as George Carlin’s routine on the seven words you can’t say on TV.

“I didn’t say coño, I said ño,” he exclaimed proudly while laughing. “I watched some Alvarez Guedes to perfect it. In Spain, you would say joder. I went to Aaron with these sorts of things, and some were approved.”

Casting conversations aside, Bardem is eager for audiences to see Being the Ricardos and see Lucy and Desi in an honest portrayal that reveals many new layers to the couple as well as insight into their private lives. 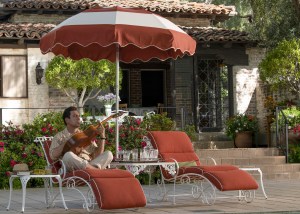 “Desilu was a production company that was run by a woman and a foreigner at the end of 1950s in the United States. That, in and of itself, is an amazing accomplishment,” he said of what he hopes viewers take away from the film. “Both of them were super talented but also, they made a very strong team. That included the whole Desi as second banana of it all. In my understanding [of their relationship], he was OK knowing that Lucy was the star of the show. She was the creative force. He would take the reins in the production aspect. He made sure everyone knew that and that they treated [Lucy] as she deserved. He protected her and was always there for her no matter what.”

He added: “I don’t think he ever felt second to her because he knew his place which was the most difficult in many ways. He faced off against executives and the studios making things work. Letting everyone hear his voice — accent and all as a foreigner — and that it was respected. But done in a way that was charming. People weren’t often sure if they agreed with him but they [trusted him]. That’s why they say, ‘Don’t f*ck with a Cuban because you will lose.’ He was so talented, stubborn, and relentless — and he knew it. So people let him be because he was making everybody rich. And that includes the racism issues we touch upon, how he fought for his voice to be heard in a world full of Americans that weren’t used to seeing foreigners as they do now. If art and creativity shows us something it’s that we have to break any box to really move forward with intuition, creativity but also awareness of things that are done with love can be unifying.”