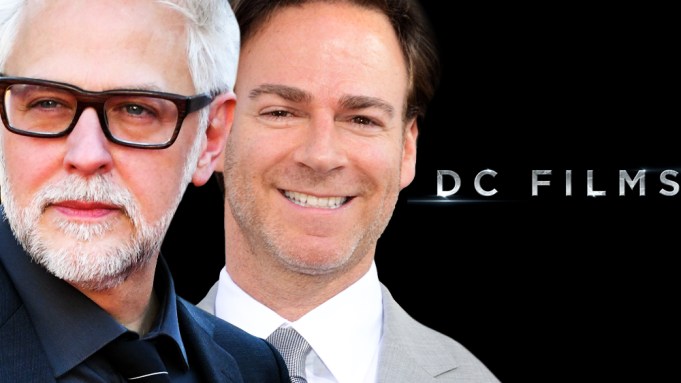 Finally, Warner Discovery Boss David Zaslav has a new head of DC studios; not one but two and it’s Guardians of the Galaxy and Suicide Squad filmmaker James Gunn and DC films producer Peter Safran.

They both have the new titles of Co-Chairmen and Chief Executive Officers of DC Studios, overseeing the overall creative direction of the DC Universe across film, TV, and animation under a single banner. The duo will report to Zaslav, but will also be in close correspondence with Warner Bros Film Group Co-Chairs and CEOs Mike De Luca and Pam Abdy, on such matters as marketing, distribution, capital spend — just so that everyone is on the same page. Gunn and Safran start effective Nov. 1.

Warner Bros Discovery Will Take Up To $4.3 Billion In Restructuring Charges From Merger

What happened here? Buzz was intense that Safran was going to get the job last week in the wake of former DC Films President Walter Hamada departing the studio. Then insiders told us that wasn’t true; that the first look deal for the Safran company was just re-upped. Turns out that Safran didn’t want to run DC alone unless there was a creative face, that being his Peacemaker and Suicide Squad partner Gunn. Apparently, the twosome became even more serious contenders for the job as they were advising Zaslav on candidates; one of those previously being Warner Bros. vet and Lego Movie producer Dan Lin.

In his new role, Gunn is exclusive to Warner Bros Discovery/DC. No more Marvel. He can only direct TV series and movies for Warner Discovery/DC. Gunn’s Guardians of the Galaxy Vol. 3 comes out via Disney/Marvel on May 5, 2023. There’s also a Guardians of the Galaxy holiday special hitting Disney+. The model that Zaslav and De Luca were eyeing here in Gunn-Safran was one akin to Disney’s Pixar where there is a creative and business face to the new DC label.

Meanwhile the Safran Company will continue to be run by its President of Production, John Rickard. They have several projects in the mix inside and outside Warner’s DC, i.e. the Idris Elba-John Cena action feature Heads of State in the works at Amazon Studios.

While Lin was a serious candidate, we hear he asked Zaslav for too much. Furthermore untangling Lin from his deal at Universal would have been a headache for Warner Discovery as the former Warner Bros development had a financing component to this deal.

Safran was an easier get for Zas given that he only had a first look deal already in place at Warner Bros.

Zaslav is still looking for a new head of Warner Bros. Animation, the third feature bucket he outlined when taking on the new conglom next to Warner Bros. Motion Pictures and DC.

Development insiders at the studio are excited: The prospect of gearing up writers’ room under Gunn is a luring prospect for talent and scribes to flock to the studio.

In their new roles, Gunn and Safran will spearhead the development and execution of a long-term plan for the many properties licensed from DC Comics, focused on continuing the tradition of DC storytelling across all mediums, while building a sustainable growth business out of the franchise. Safran has been a lynchpin for Warner/New Line theatrical between building Conjuring to the biggest horror franchise ever at $2 billion WW, and shepherding DC’s highest grossing movie ever, Aquaman at $1.1 billion as well as Shazam!; Gunn’s The Suicide Squad; and the filmmaker’s HBO Max original, live-action series Peacemaker. Also on the horizon from Safran’s DC is Shazam: Fury of the Gods (March 17), Blue Beetle (due August 18, 2023) and Aquaman and the Lost Kingdom on Christmas 2023. Not produced by Safran, but definitely DC, is the Ezra Miller starring The Flash on June 23, 2023.

Zaslav commented: “DC has among the most entertaining, powerful, and iconic characters in the world and I am thrilled to have the singular and complementary talents of James and Peter joining our world-class team and overseeing the creative direction of the storied DC Universe. Their decades of experience in filmmaking, close ties to the creative community, and proven track record thrilling superhero fans around the globe make them uniquely qualified to develop a long-term strategy across film, TV, and animation, and take this iconic franchise to the next level of creative storytelling.”

Gunn and Safran commented: “We’re honored to be the stewards of these DC characters we’ve loved since we were children. We look forward to collaborating with the most talented writers, directors, and actors in the world to create an integrated, multilayered universe that still allows for the individual expression of the artists involved. Our commitment to Superman, Batman, Wonder Woman, Aquaman, Harley Quinn, and the rest of the DC stable of characters is only equaled by our commitment to the wonder of human possibility these characters represent. We’re excited to invigorate the theatrical experience around the world as we tell some of the biggest, most beautiful, and grandest stories ever told. We’re especially enthusiastic about doing all of this with Mike, Pam, Casey, Channing, and the whole Warner Bros. Discovery team, and are grateful to David Zaslav, whose bold vision for the future of the franchise we share and allows for this once-in-a-lifetime opportunity. Most of all, we can’t wait to bring you all into the story of the DCU.”

De Luca and Abdy said: “We could not be more excited to have James Gunn and Peter Safran join the team and assume the leadership of the DC Universe. James is a brilliant filmmaker and storyteller and Peter is a tremendously successful and prolific producer and to have them both committing to work together to forge this new era for DC is a literal dream come true. We all share a very similar sensibility and passion for this universe and the stars couldn’t have aligned any better. We can’t wait to get started, dig in, and collaborate with these unmatched creative minds.”

Before Suicide Squad, Gunn made Scooby-Doo and Scooby-Doo 2 at Warner Bros; the first he directed, the second he wrote. He also wrote Zack Snyder’s 2004 remake of George A Romero’s Dawn of the Dead. Other film credits include the horror comedy Slither; the dark superhero comedy Super; and the Guardians of the Galaxy franchise at Marvel which counts over $1.6 billion at the global box office.

Safran’s producing credits count over $4 billion in global box office receipts. Including three DC films next year, he has four releases via Warner as producer including The Nun 2 which he’s currently overseeing production on in Europe. Prior to forming his own company, Safran was President of Brillstein-Grey Management, which represented some of the biggest names in Hollywood.

DC had a No. 1 film this past weekend in New Line’s Dwayne Johnson movie Black Adam which say the actor’s best box office start as a solo star with $67M domestic, $140M WW.

Below is Zaslav’s internal memo to staff about Gunn and Safran:

We are thrilled to announce that two of the industry’s most talented and experienced filmmakers, James Gunn and Peter Safran, will be joining our team on November 1 in the new roles of Co-Chairmen and Chief Executive Officers of DC Studios, overseeing the overall creative direction of the DC Universe across film, TV, and animation. As we make this transition to unify the creative expression of DC under a single banner, we are grateful to Walter Hamada for his many contributions to both DC and New Line over the years.

I’ve spent the last few months talking in-depth with James and Peter about the future of the DC Universe and am more excited than ever about where the franchise is headed with them at the helm. They will report to me and will work closely with Mike De Luca and Pam Abdy as well as our other creative business executives, Channing Dungey, Casey Bloys, Kathleen Finch, Pam Lifford, and David Haddad. We now have the full leadership team in place… and the team is experienced and strong.

One of the great strengths of our company is our unmatched collection of IP that includes many of the most beloved superheroes of all time… Superman, Batman, Wonder Woman, The Flash, Green Lantern, Aquaman, and now Black Adam, to name just a few. For over 60 years, these and other DC characters have captivated and inspired generations of fans around the world… and as stewards of the iconic franchise, we feel a real responsibility to preserve and expand the DCU for the enjoyment of future generations. In many ways, we have only begun to scratch the surface. James and Peter have a broad vision for DC storytelling and how it all fits together, and they plan to create even more compelling and unforgettable experiences for DC fans worldwide, while building a sustainable growth business out of the iconic franchise.

James and Peter have extensive experience in the superhero genre having brought some of the Marvel Cinematic Universe and DC Universe’s most popular characters to life in hit films and series, including: Marvel’s blockbuster Guardians of the Galaxy, and DC’s highest grossing movie, Aquaman; Shazam!; The Suicide Squad, and the spin-off series for HBO Max, Peacemaker. They are highly respected by creatives and talent alike and bring their own deep love and appreciation for the characters and stories of the DCU to their new roles. As they told me, this is a passion project for them, not just a job… and that is sure to be evident in their storytelling.

When James was 10 years old, growing up in Missouri, he went to a comic book convention with his dad and that experience, he said, changed his life forever. He would escape into his own world with comic books, and he began to draw and write his own comics and started making movies when he was just 11 years old. That set him off on his creative journey as a filmmaker and storyteller. His experience also demonstrates the real power of these characters to inspire audiences of all ages.

Peter has worked extensively in both the horror and superhero genres and has produced several hit movies and series for Warner Bros. Pictures and New Line, including the entire Conjuring universe, which is the most successful horror franchise of all time at $2B+ in worldwide box office and counting. He and James have collaborated on numerous projects over the years and have a close working relationship. In fact, they told me one of the things that appealed most to them about this opportunity was the chance to lead DC Studios together.

We could not ask for a better team to run DC and are so excited to welcome them to WBD next week. Please join me in wishing James and Peter much success!