Ever since Todd Black got into the film business as a producer, he wanted to work with Aaron Sorkin.

“I remember early on seeing things he wrote, even plays, and going ‘Wow, this guy has a voice like nobody’s business,’” says the Oscar-nominated producer of Fences.

However, Black says “I never had anything good enough to bring to him.” This goes back to some sage advice Black received from Denzel Washington years ago. 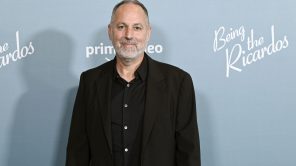 The two were having lunch at the Columbia Pictures commissary shortly after Washington took home a Best Supporting Actor Oscar for Glory. The budding producer was eager to make a movie with Washington, but the actor told him, “‘When you read a script that keeps you up at night and makes your heart pound and you can’t get it out of your mind because of the characters and the story, call me. Otherwise, don’t call me again’” remembers Black. “And that’s kind of the way I felt with Aaron,” says the producer.

Long before Escape Artists, when Black was running Mandalay Pictures, he was trying to get the rights of Lucille Ball and Desi Arnaz, except the estate wasn’t ready at the time. In recent years, the development of such a project raised its stakes when creative executive Jenna Block walked through Black’s door. Block had written a paper on Ball’s film career, something which fascinated Black as he wasn’t that familiar with it. At this point in time, Ball’s daughter, Lucie Arnaz, was keen to working with Black given his reputation for making movies based on sincere true stories for the big screen.

“Todd asked me if I was interested in writing a movie about Lucille Ball and Desi Arnaz,” says Sorkin who mentions he had a cursory knowledge of the early sitcom couple initially, “The first thing that got me interested in the story was that Lucy was accused of being a Communist.”

“Nobody knew that,” said Sorkin which prompted him to use that as a jumping-off point for his behind-the-scenes story about the married couple. Of most importance for the Oscar-winning screenwriter of The Social Network, he didn’t want to write a typical biopic about them.

“The biopic structure tends to be familiar to audiences, kind of like a greatest hits album,” Sorkin tells Crew Call.

Sorkin hammered out a spine whereby we’d get to know the Ricardos in the wake of Ball being hit with this scandal, and how Lucy and Desi weathered and thrived through a five-day production week of I Love Lucy.

Coming away from development meetings with Black, Sorkin explains, “I was far from seeing the whole film in my head, but I was seeing how these points of friction between Desi and Lucy could become scenes, between Lucy and Vivian Vance, between Lucy and Jess Oppenheimer, Lucy and Bill Frawley. There were very interesting things there, stuff that makes them not at all like the people we think they are from I Love Lucy.”

Listen to our chat with Sorkin and Black below on the making of Amazon Prime’s Being the Ricardos:

Being the Ricardos is available to watch on Amazon Prime.