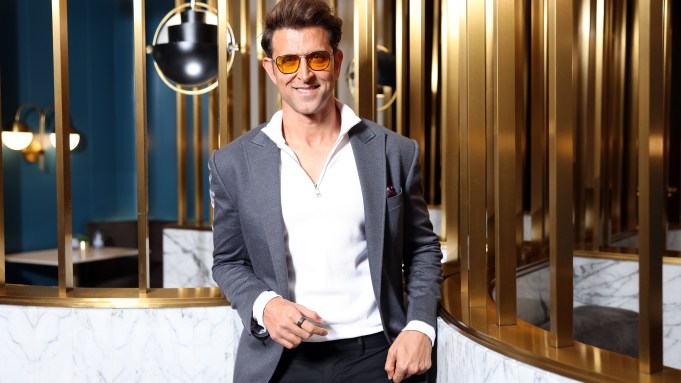 Hrithik Roshan passed through Saudi Arabia’s Red Sea Film Festival late last year to host one of the festival’s popular ‘In Conversation’ sessions. Before Roshan arrived at the festival venue, extra security was drafted in as the audience queue spiraled two floors. When Roshan finally arrived, he was mobbed by the crowd. The reaction was unsurprising. Despite Hollywood visitors like Spike Lee and Antonio Banderas, the biggest names at Red Sea were the stars from India’s Bollywood industry.

The son of Bollywood film director Rakesh Roshan, Roshan grew up in the business and is one of the biggest leading men in Indian cinema. His films have grossed over $600 million over a two-decade career. He has been nominated ten times and has won six Best Actor prizes in India’s Film Fare Awards.

Below, Roshan speaks to Deadline about the popularity of Indian cinema in Saudi Arabia, whether he is looking to make the jump to Hollywood, and why he thinks his last big-budget pic Vikram Vedha failed at the box office.

DEADLINE: How did it feel to receive such a raucous reception when you entered the festival space?

HRITHIK ROSHAN: In the beginning, it used to unnerve me because I’m a very shy person. I grew up with a stutter. I was very reticent, but I wanted to be an actor. I wasn’t ready for what happened with my first film: The popularity and the fame, so I’ve learned over time to make a shift from being nervous and anxious about it to a sense of gratitude. I have a sense of gratitude now, and I’m just happy to be doing my job and have the opportunity to contribute something to the world that is inspiring people.

DEADLINE: Many of the enthusiastic fans who came out to see you and other Bollywood stars here at Red Sea were from Pakistan. On the global stage, Pakistan and India have a fraught relationship. Do you think Bollywood stars have a role in connecting the two nations and cultures?

ROSHAN: Art is one language that has the ability to cut across all borders, demarcations, and differentiations to hit human beings straight where the heart is. Art can also unite people and promote empathy and sympathy, and make people realize that we really are all the same, so movies are a great way to reach those gaps that are often a construct of power games and politics. I’m happy to be in a business where I don’t need to think about all of that, and I can operate with my heart.

DEADLINE: It’s often been reported in the Indian press that you have signed with a Hollywood agency and are looking for opportunities in America. Is that true?

ROSHAN: So this is a rumor that has been going on for the last 10 or 15 years. I am interested in doing good films. It doesn’t matter if it’s in Hindi or English, and it doesn’t matter if it’s Bollywood or Hollywood, so I am on the lookout. But it’s not something that I am abandoning my current work for. It’s not something that I’m pursuing 100%. But if something comes my way, and if it makes sense, then I would love to do it. Why not? I’m here to learn. I love being a student. I love being around people who know more than me. And I have a feeling that if I do a film in Hollywood, there will be a lot for me to learn. And that’s something that I will look forward to.

DEADLINE: This past year, the box office in India has struggled. One of the big projects that underperformed was your film ‘Vikram Vedha’, a remake of a popular South Indian film. Why do you think it didn’t draw audiences to the cinemas?

ROSHAN: It was only in hindsight, after the pandemic, that we went back and looked at the number of views that the original South Indian version had, and it was 200, 300 million views on every platform. During the pandemic, people were hungry for content. They were consuming everything, and it didn’t matter what language. So by the time we announced that we were making our version, more people went and saw the original film on the platforms. It had already been consumed. It was bad luck, but I think it was a good film.

DEADLINE: What’s next for you?

ROSHAN: I’m working on a film right now with Siddharth Anand, with whom I’ve done a previous project called War. This film is based on the Indian Air Force, so I’m playing a pilot. And yes, of course, the moment I say that what comes to mind is Top Gun. And yes, Top Gun is a film that inspired us all. That was the original. We’re basing this film on a fictitious story but against the backdrop of real-life events.

DEADLINE: As you move into the next stage of your career, what will be your guiding principles?