We got trouble, my friends, right there in New York City. It’s trouble with a capital T and that rhymes with C, and that stands for … Covid. Broadway’s revival of The Music Man has canceled performances through at least January 1 after star Hugh Jackman tested positive for the coronavirus.

The musical’s co-lead, Sutton Foster, revealed late last week that she had tested positive for the virus. But for now, performances are set to resume on Sunday, January 2. 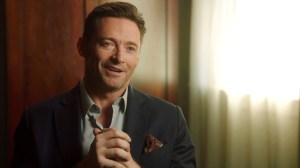 It’s just the latest Broadway show forced to go dark as the nation and world endure the latest Covid spike, spurred by the more-contagious but potentially less dangerous Omicron variant.

“Just wanted you to hear it from me. I tested positive for covid,” Jackman tweeted today. Mild symptoms and as soon as I’m cleared … looking forward to getting back to The Winter Garden! @MusicManBway

Just wanted you to hear it from me. I tested positive for covid. Mild symptoms and as soon as I’m cleared … looking forward to getting back to The Winter Garden! @MusicManBway pic.twitter.com/q1oEAzXX02

Jackman and Foster lead the company in the show directed by Jerry Zaks and choreographed by Warren Carlyle. It’s playing at the Winter Garden Theatre.

The cancellations come a few days after Jackman went, well, viral for a speech he gave after understudy Kathy Voytko filled in for Sutton as Marian Paroo. The star noted the show learned of Sutton’s positive test at noon, “and at 1 o’clock, she had her very first rehearsal as Marian Paroo,” Jackman told the crowd after Thursday night’s performance. He went on to praise swings and understudies “all over Broadway” for helping to keep theater going in “this time we have never known.”

Here is his full speech:

My amazing friend @KathyVoytko went on with NO rehearsal for Sutton Foster last night in The Music Man. Thank you, @RealHughJackman for this speech. Understudies are heros and should be paid respect every day! pic.twitter.com/70s9ybia5n