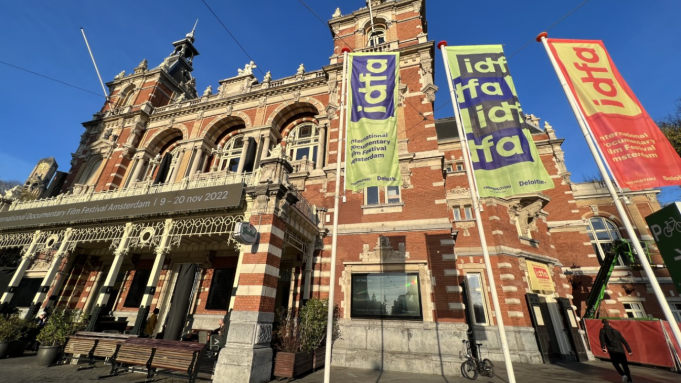 The prestigious honor comes with a €15,000 cash prize. Announcing the award, the five-member jury noted, “This film has characters who breathe life and take us on a journey, opening us up to the worlds of culture and art, of business and politics, of the mechanics of a success story. It is infused with love.”

Glob has been following Soko’s career for well over a decade. According to the Villa Medici website, the figurative painter is “known for her political stance on the art of portraiture, claiming the need to use it as a tool of empowerment and deconstruction of marginalization or domination. That is why she addresses multiple issues such as feminisms, queerness, women’s representation throughout art history and body politics in general.”

Simon Chambers won Best Directing in the international competition category for his film Much Ado About Dying, a tender and often hilarious look at the filmmaker’s colorful Uncle David in the last years of his life. That honor comes with a €5,000 prize. [see below for full list of IDFA winners].

In an interview with Deadline earlier at IDFA, Chambers recalled his late uncle’s cheerful attitude about life even as old age was taking its toll on him.

“He’d say things like — say something really bad happened — he’d say, ‘When life’s good, it’s very, very good. But when it’s bad, it’s horrid. So you get through the bad bits, but then there’s always another good bit.’”

In the separate Envision Competition category at IDFA, Angie Vinchito won the award for Best Film for Manifesto, a film composed entirely of found footage of “often-shocking videos that Russian teenagers have posted on social media.”

The Envision top prize also comes with a €15,000 cash award.

“This film is an outcome of the digital era, of an entire generation of children whose reliable outlet for their intimacies, fears, and desires is social media,” the jury said of Manifesto. “The filmmaker blew us away with his ability to structure and edit the found footage of these individual voices into a powerful collective choir. Dark at moments, the film is a humorous yet heart-wrenching portrait of a lost generation under a dictatorial regime. Surrounded by violence and hopelessness, from the home and the school to the intimidating political system, they show persistent rebellion and dignity.”

Roberta Torre earned Best Directing honors and a €5,000 prize in the Envision Competition category for The Fabulous Ones.

IDFA, the largest documentary film festival in the world, opened on November 9 and runs through Sunday, November 20. These are the awards winners announced at the ceremony tonight:

DFA DocLab Award for Digital Storytelling: He Fucked the Girl Out of Me, dir. Taylor McCue