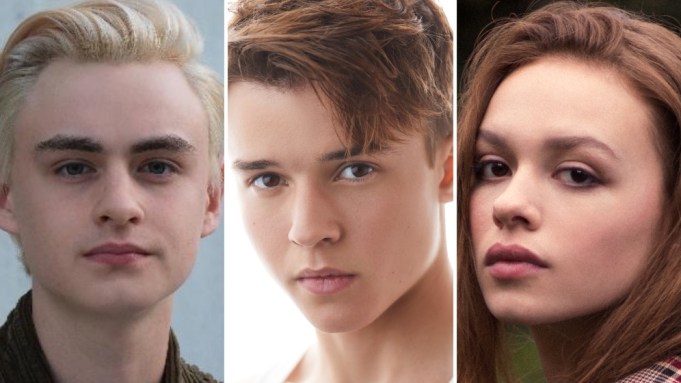 EXCLUSIVE: Jaeden Martell (It), Maxwell Jenkins (Lost in Space) and Sadie Soverall (Fate: The Winx Saga) have signed on to star alongside Academy Award winner Nicolas Cage in the survival action-thriller Sand and Stones from Highland Film Group, which will enter production in Dublin, Ireland next week.

The film directed by Ben Brewer (The Trust) is set in a post-apocalyptic and sparsely populated world where Paul (Cage) and his twin teenage sons, Joseph (Martell) and Thomas (Jenkins), have managed to claw out an existence, yet live in constant fear. Until, confronted by imminent danger, they must execute a desperate plan to survive. Details as to Soverall’s role haven’t been disclosed.

“Jaeden and Maxwell are rising stars and are perfectly cast as the twin sons of Paul, played by the incomparable Nicolas Cage,” said Highland Film Group’s CEO, Fraser. “And rounding out our fantastic cast is the up-and-coming actress Sadie Soverall in this thrilling, action packed ride.”

“With his keen eye and unique vision, Ben Brewer is the ideal director to bring Mike Nilon’s apocalyptic and electrifying script to life,” added Highland’s COO, Perrier. “Our initial film with Ben was The Trust and we are looking forward to working once again with this talented filmmaker.”

Martell first garnered attention with his turn opposite Bill Murray and Melissa McCarthy in Ted Melfi’s dramedy St. Vincent before going on to star in the It horror films from New Line — based on the novel by Stephen King — and Rian Johnson’s starry whodunit Knives Out for Lionsgate. The actor more recently starred opposite Donald Sutherland in John Lee Hancock’s Stephen King adaptation Mr. Harrigan’s Phone for Netflix, Blumhouse and Ryan Murphy Productions.

Best known for his work as Will Robinson on Netflix’s sci-fi action series Lost in Space, Jenkins also had starring roles in the drama A Family Man with Gerard Butler and Alison Brie, and as the title character in Joe Bell with Mark Wahlberg. He recently appeared as Young Reacher on Prime Video’s action series Reacher and will be seen next on Apple TV+’s Dear Edward.

Soverall found her breakout role as Beatrix on Netflix’s Fate: The Winx Saga and will next be seen starring alongside Rosamund Pike, Jacob Elordi, Barry Keoghan and Richard E. Grant in Emerald Fennell’s feature Saltburn for Amazon. Also coming up for the actress is the crime thriller Little Bone Lodge with Joely Richardson.