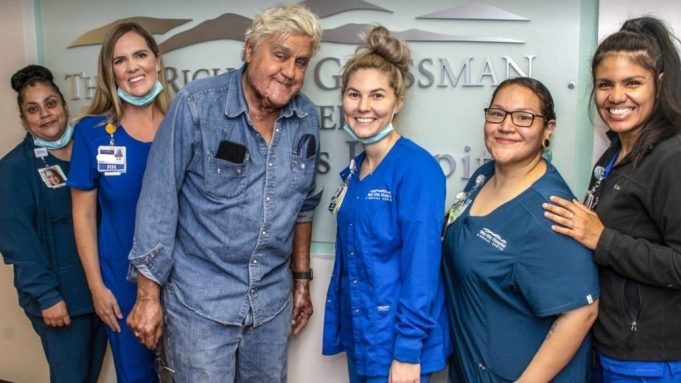 Jay Leno was released today from the Grossman Burn Center 10 days after suffering burns to his face, hands and chest in a gasoline fire in his Burbank garage.

“I am pleased with Jay’s progress, and I am optimistic that he will make a full recovery,” Dr. Peter Grossman of the Grossman Burn Center said in a statement.

The center also released a photo of Leno with some of the hospital staff. The picture shows Leno with visible burn scars on his face, chin and neck.

“Jay would like to let everyone know how thankful he is for the care he received, and is very appreciative of all of the well wishes,” according to a statement from the Grossman Burn Center. “He is looking forward to spending Thanksgiving with his family and friends and wishes everyone a wonderful holiday.”

The 72-year-old Leno suffered second-degree and near-third-degree burns on Nov. 12 while working on one of his vintage cars. Acording to Dr. Grossman, Leno was underneath the car when the fire broke out.

The former Tonight Show host will continue to receive follow-up care at the Grossman Outpatient Burn Clinic. During his in-patient stay, he underwent two surgeries and underwent hyperbaric oxygen therapy.

Last week, Leno released a statement saying, in part, “I am OK. Just need a week or two to get back on my feet.”

Leno hosted The Tonight Show from 1992-2009. He currently hosts CNBC’s Jay Leno’s Garage, which aired its Season 7 finale on October 26, and the revival of syndicated game show You Bet Your Life. The incident does not impact the game show, which has wrapped filming on its second season.