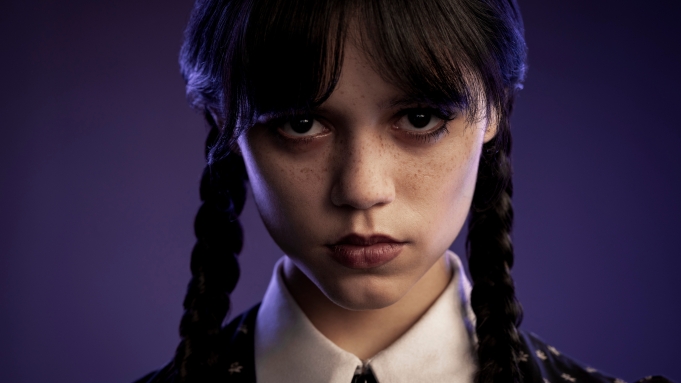 There’s a lot riding on Jenna Ortega’s deadpan performance as Wednesday Addams in Tim Burton’s coming-of-age comedy Wednesday, which debuts — of course — Wednesday, November 23 on Netflix. She plays the beloved Addams family character in the series, which marks Burton’s first live-action show, as well as his directing debut for such a project.

Ortega spoke recently with the most well-known actress to have played the iconic goth-girl part, Christina Ricci. Turns out, Ricci has a role in this take on Charles Addams’ classic cartoon characters, too.

“It was really important to me that I wasn’t doing a knockoff of your performance,” Ortega told Ricci, who first essayed the character in 1991’s The Addams Family. “Another thing is every time we’ve seen Wednesday, she’s been 5 years old, 10 years old. So when someone is saying really dark, twisted things out of a place of pure honesty and innocence, that naive aspect of a child, it’s a bit different when you get older and become a teenager because then you just sound like a bitch. You don’t want her to be nasty.”

Ricci said she can relate. “I wanted to ask you, because I found with a character like this, sometimes when they’re written in such an extreme way, it can be difficult to move a traditional narrative along because the emotional reactions aren’t where people expect them to be—especially when you’re dealing with different directors and different people’s takes on such an extreme character. A lot of times with television, you find the character during the first season, and that must have been so hard with a character like this.

“Yeah, it was very stressful,” Ortega admitted, before providing details.

“I’m so glad you mentioned the multiple directors thing because Tim didn’t shoot all of the episodes. We were going from Tim to another director, back to Tim, to another director. I felt like everybody wanted different things from her. I remember Tim did not want me to have any expression or emotion at all. He wanted a flat surface, which I understand. It’s funny and great except when you’re trying to move a plot along, and Wednesday is in every scene. There were a lot of battles like that because I felt like people didn’t always trust me when I was creating my path in terms of, ‘Okay, this is her arc. This is where she gets emotional.’ And then also, we jump into the first episode and so much is happening. You have to introduce the whole story. Meanwhile, I’m still finding my footing, and then it’s the cello lessons and the archery lessons and this and that.”

The series follows Wednesday during her years at Nevermore Academy. It’s described as a sleuthing, supernaturally-infused mystery in the vein of Nancy Drew. In the series, Wednesday attempts to master her emerging psychic ability, thwart a monstrous killing spree that has terrorized the local town, and solve the supernatural mystery that embroiled her parents 25 years ago — all while navigating her new and very tangled relationships at Nevermore. According to Ortega, who at 19 already has a decade of acting under her belt, it was a lot.

“I would call my parents every night in a panic because I felt like it was different from any job I had ever done before where I typically have that time to sit into the character,” she told Ricci. “I got out to Romania and we started training and shooting immediately. We didn’t really have time for rehearsals. I remember it being very stressful and confusing. I did the best I could, but that’s probably the most overwhelming job I’ve ever had.”

For a time, Ortega says she found it hard to stay centered.

“There have never been so many cooks in the kitchen. I was completely lost and confused. Typically I have no problem using my voice, but when you’re in it—I just remember feeling defeated after the first ​​month. So I think something really wonderful that has come out of the show is that I can use my voice in a much stronger way than I ever have….which I’m really grateful for.”

Among the things the actress found herself speaking up for about was the character herself.

“It’s like a fight, and you get to a point where, when you love and respect a character enough, all you want to do is protect them. I felt like sometimes in the attempt to make her a human girl, they were trying to make her any other teenage girl.”

But she says she found an ally in Burton.

“I remember Tim being really wonderful about things like that and calling me to his trailer in the mornings and saying, ‘What are you uncomfortable saying? What do you want to say?’ When you have supportive collaborators like Tim, it makes it a lot easier. There were a couple people like that on set who were my rocks, for sure.”