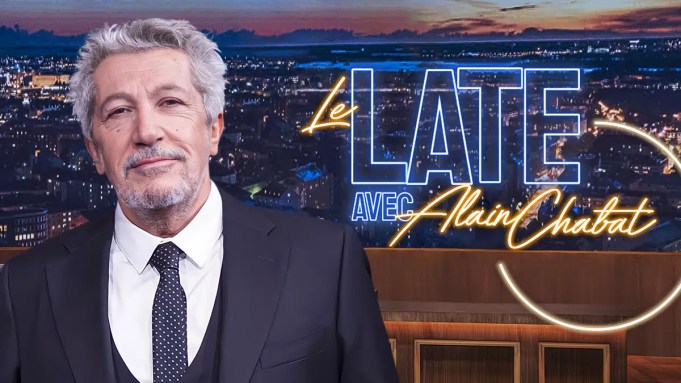 A new French late show, fronted by popular actor, director and writer Alain Chabat launched on France’s TF1 amid much fanfare this week in the country’s latest attempt to crack the late-night talk show format.

Running Monday to Friday from 10.55 pm, Le Late Avec Alain Chabat kicked off on Monday (November 21), with the host joking in his opening spiel: “I nearly did this show in 2018, but it was during the World Cup in Russia, so it was a bit touchy. But now, it’s in Qatar, so tout va bien.”

The show was commissioned by TF1 Executive Vice President, Content Ara Aprikian to fill a late-night slot that opened up due to the timing of the Qatar World Cup soccer matches, earlier in the evening.

Chabat is no stranger to TV studio shows, having first found fame in the late 1980s as co-creator of popular Canal+ comedy sketch program Les Nuls, before focusing mainly on cinema, to star in popular comedies such as 2002 hit Asterix & Obelix: Mission Cleopatra and HOUBA! On the Trail of the Marsupilami.

Internationally, Chabat is best known for his collaborations with director Quentin Dupieux on films such as Cannes 2022 title Smoking Causes Coughing, Berlinale selection Incredible But True and Reality, and also put in an appearance as Napoleon Bonaparte in Night In A Museum 2.

He returned to TV studio in 2018 for a reboot of his Canal+ show Burger Quiz, featuring two teams called ketchup and mustard, co-writing the new version with son Max Chabat, who is also one of the writers on the late show.

TF1 has been teasing the new show since September beginning with a sketch, light-heartedly poking fun at King Charles’s viral ink pen malfunction at a signing ceremony, in the days after the death of his mother Queen Elizabeth II, also starring Jamel Debbouze and Lea Drucker.

Talking ahead of the launch, Chabat told French chat show C à Vous: “We love the late shows from Johnny Carson to Jimmy Fallon, passing by Jimmy Kimmel, Conan O’Brien and all the others. We’re going to take the codes of the late show and try to pass a funny hour with people.”

True to his word, the show has the look and feel of the U.S. originals.

There is the big desk, a night-time skyline view in the backdrop (showing the Finnish capital of Helsinki according to French media), a resident group called the Laters, a host of starry guests, mainly from the French cinema world thus far, and buzzy live music acts.

There are two major differences in that the show is pre-recorded – so current affairs do not feed into the gags and monologues apart from Chabat’s first nod to the World Cup in the opening show  – and for now, it is set for a limited run of 10 shows.

Aside from the live music acts, no international names have yet made it onto the sofa of the French-speaking show.

France has a long history of trying to create its own late-night talk shows, with the likes of TV presenter Arthur and former Cannes Film Festival president and journalist Pierre Lescure taking up the challenge in the past with limited success.

The jury is out on whether Chabat has finally nailed it, for both the public and TV reviewers.

Weekly TV and culture magazine Telerama suggested Chabat had gotten as close as anyone to pulling it off, in an article headlined “For once, it’s (nearly) as good as the Americans”.

“A late show in France, it’s been 30 years we’ve been trying to pull it off and no one’s ever managed it, but just as he did with Burger Quiz four years ago, Alain Chabat takes everyone by surprise and hits where they’re not expecting it,” it read.

The daily newspaper Libération was less enthusiastic saying the first show lacked substance and electricity, and describing it as “ni froid, ni show”, ‘neither cold, nor hot” in a word play on the French word for hot, chaud.

The viewing numbers for the first three shows also give a mixed picture.

The first show, running after the Wales-U.S. World Cup match, drew 1.07 million viewers for TF1 for a 10.2% share of the audience, which was slightly less than a re-run on M6 at the same time of an episode of Cauchemar en Cuisine, in which a top chef rescues failing restaurants.

With another seven shows to go, it remains to be seen whether France has finally cracked the late-night talk show format.